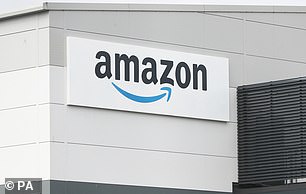 Pay demands: Workers at Amazon’s Coventry warehouse are set to walk out in protest against a pay rise

Amazon workers are staging their first ever strike in the UK in a dispute over pay.

Members of the GMB union at the company’s warehouse in Coventry will walk out today in protest against a pay rise which the union said is worth 50p an hour.

Stuart Richards, GMB senior organiser, said: ‘They’re [the workers] taking on one of the world’s biggest companies to fight for a decent standard of living.

‘After six months of ignoring all requests to listen to workers’ concerns, GMB urges Amazon UK bosses to do the right thing and give workers a proper pay rise.’

An Amazon spokesman said: ‘Only a fraction of 1pc of our UK employees voted in the ballot – and that includes those who voted against industrial action.

We appreciate the great work our teams do throughout the year and we’re proud to offer competitive pay which starts at a minimum of between £10.50 and £11.45 per hour.’

‘Murdered’ pensioner was ‘living in sheltered accommodation blighted by prostitutes and gangs’
Microsoft profit drops 12% to $16.4B as revenue grows at its slowest pace in six years
Advertisement