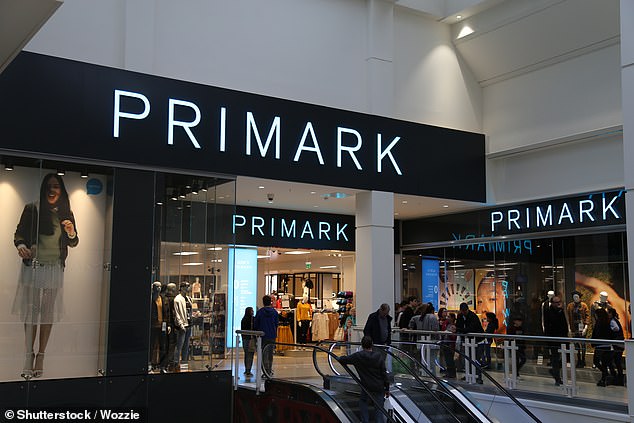 Primark’s parent company has reiterated current annual guidance ahead of its annual general meeting as the group revealed that cost volatility had started to abate.

Associated British Foods told investors on Friday its adjusted operating profit and adjusted earnings per share for the 2023 financial year were still expected to be lower.

Like many other businesses, FTSE 100-listed ABF has faced skyrocketing energy bills this year as Russia’s invasion of Ukraine led to the restriction of oil and gas supply at a time when demand was booming on the back of eased Covid-19 restrictions.

Price stability: Associated British Foods has decided not to impose any further price increases in its Primark stores beyond those already planned until next summer

Costs have been further exacerbated by a strengthening US dollar, supply chain disruption and salary hikes.

Some of these extra costs have been passed onto customers, especially in its food division, but ABF has decided not to impose any further price increases in its Primark stores beyond those already planned until next summer.

Despite the inevitable impact on margins, the business said that trading at the clothing retailer’s outlets since mid-September had been ‘encouraging’.

Six more Primark outlets have been opened in that time, including one today in Angers, France, with another four set to launch in the run-up to Christmas and 27 overall during the financial year.

ABF forecasts a ‘significant growth’ in turnover this year, having seen total revenue climb by 22 per cent to £17billion in the most recent 12-month period, mainly because of a healthy rebound in Primark store footfall.

Sales were also lifted by a record performance within ABF’s ingredients arm, which benefited from stronger demand for bakery-related goods in the Americas and Europe and higher prices offsetting rising input costs.

Chairman Michael McLintock said: ‘Our outlook for the full year is unchanged. We continue to expect further significant input cost inflation, but the volatility of our input costs has diminished.’

Yet they anticipate the company’s sugar division making greater profits than last year due partly to increased European and world sugar prices.

Associated British Food shares were 0.2 per cent up at £16.51 on early Friday morning, and have recovered by about a third since their October lows.

Russ Mould, investment director at AJ Bell, said ABF’s upholding of guidance ‘is an achievement in itself’ given the well-known problems affecting consumers.

He added: ‘While inflationary pressures remain the simple fact that input costs have become less volatile gives investors more visibility and also makes it lot easier for the business to plan for the future.

‘The company’s conglomerate structure has been a strength in 2022 as the food and ingredients business has proved resilient and that continues to be the case.’