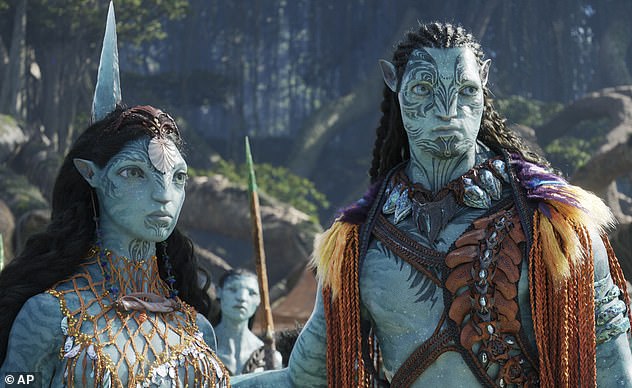 Initial reviews for James Cameron’s ‘Avatar: The Way Of The Water’ are in – and critics are already singing songs of praise for the highly anticipated sequel.

The response – which, for the most part, was glowing – emerged online shortly after the long-awaited blockbuster’s world premiere in London Tuesday, and several press screenings across the United States as well.

Reviewers have since flocked to social media to offer positive reviews for the visually impressive production, remarking on its intricate plot and and meaningful characters – calling it a marked improvement from the first.

Others, however, were less kind, with some declaring that the film was a ‘silly’ and ‘soggy’ mess – despite the astronomical amount of money that went into making it.

Recently confirmed to have a more than three hour runtime, the film – reportedly one of the most costly ever to create – needs to earn a cool $2 billion just to break even.

The films boasts a star-studded cast with A-listers such as Zoe Saldaña, Sigourney Weaver and Kate Winslet, and is set to hit theatres on December 16 in the US.

Initial reviews for James Cameron’s eye-watering Avatar sequel are in – with response, for the most part, coming as glowing praise

The Wrap – ‘Cameron is in top form, especially in the final act’

Despite only premiering this past Tuesday, The Wrap’s Drew Taylor said he has already seen the more than three hour film twice.

The reviewer went on to declare that following the back-to-back viewings, he was left ‘overwhelmed by both its technical mastery and unexpectedly intimate emotional scope.’

He went on to comment on the film’s deeper themes when compared to its predecessor’s, writing that while ‘the world is expanded… the characters are most important.’

He added of the film’s director, a notorious perfectionist: ‘Cameron is in top form, especially in final act. Good to have him back.’

Ian Sandwell of Digital Spy called the film a visual ‘masterpiece,’ while also pointing out some of the yet-to-be released film’s supposed flaws.

He wrote: ‘Unsurprisingly, The Way of Water is a visual masterpiece with rich use of 3D and breathtaking vistas.’

‘It does suffer from a thin story and too many characters to juggle, yet James Cameron pulls it together for an extraordinary final act full of emotion and thrilling action.’

David Sims of The Atlantic offered a much more generous analysis, writing that the movie left him on the edge of his seat.

‘AVATAR: THE WAY OF WATER absolutely owns bones,’ Sims wrote. ‘I was slapping my seat, hooting, screaming for the Na’vi to take out every last one of those dang sky people.

He added that despite a slow start, the film boasts an ‘incredibly involving second act with a ton of world building and cool creatures that blisses you way out,’ which is capped by ‘an hour of screamingly good crystal clear emotionally trenchant action.’

He declared the sequel is sure to send viewers ‘home full and happy’ upon its release December 16.

Entertainment Weekly’s Yolanda Machado, like many of her peers, praised the visual prowess of Cameron’s latest production, but added that ‘it kind of reminded her of a couple other films,’ writing how the director and his team prepackaged old themes for a modern audience.

‘James Cameron is a technology master,’ she wrote, ‘and his direction is at its most precise here.’

She continued: ‘The film as a whole, while a technological marvel with a breathtaking world, is just …. Dances with Wolves and Free Willy for Gen Z! Pee beforehand.’ 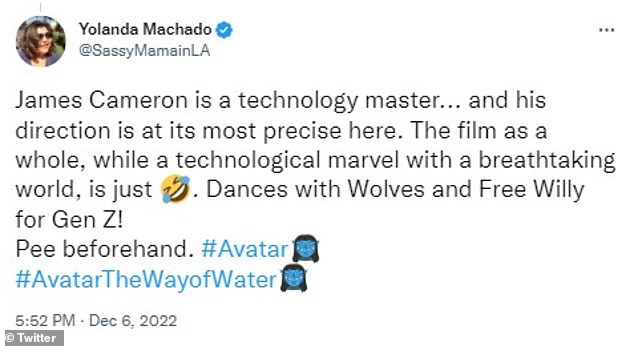 Empire magazine’s Amon Warmann had a more mixed opinion of the film, writing how it was ‘hit or miss’ – but also conceded that it had bested its predecessor, released in 2009.

‘Liked it, didn’t love it,’ Warmann wrote. ‘The good news is that 3D is good again (yay!), and the action is pretty incredible (especially in the final act).’

He added: ‘But many of the storylines feel like they have to stop and start, and the high frame rate was hit & miss for me.’

‘This movie sure is pretty to look at though,’ he continued. ‘On the whole, I liked The Way Of The Water more than Avatar 2009, if for nothing else because it has less in your face white saviorism than the original.’

People – ‘A little long, but worth it for the gorgeous visuals’

People magazine’s Kara Warner prefaced her review by disclaiming that she was ‘Avatar stan’ and ‘had high hopes’ for the movie.

She wrote: ‘And for me it totally delivers.’

Admitting that the film was ‘a little long,’ the reviewer went on to remark the wait was well worth it, citing ‘the gorgeous visuals’ and ‘wonderful’ new characters.

‘A total thrill,’ she declared.

‘Only repeat from the OG is that “never experienced anything like it” awe. Better than 1st? Easily.

‘The 3D water world & creatures are so surreal it is downright moving. There’s a major Titanic homage.’

Brandon Davis from ComicBook.com hailed the film as ‘a never-ending visual spectacle.’

‘It’s a better, more complex story than the first with solid emotion but the characters could grow a bit more,’ he wrote. 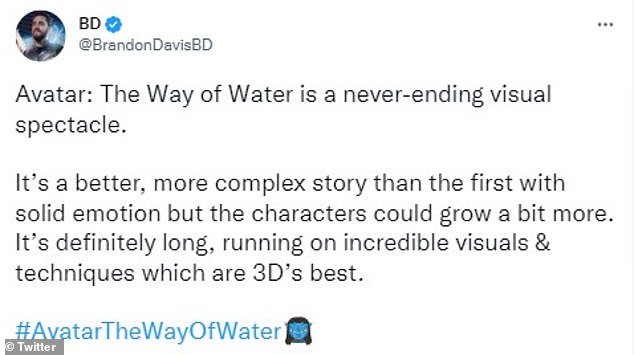 ‘Avatar: The Way of Water,’ reviewer Alex B. wrote. ‘To breathe, cry. To believe in hope again.’

He, like others proceeded to hail Cameron for what likely may be the director’s crowning achievement.

‘What was once lost is found again,’ he wrote. ‘#InCameronWeTrust.’

UPROXX – ‘”the most visually impressive part of the movie?”…”the whole thing honestly”‘

UPROXX reviewer Mike Ryan too thought highly of the movie – which is the second in a planned trilogy – offering an interesting anecdote to illustrate his satisfaction.

‘Someone texted me, “what’s the most visually impressive part of the movie?”‘ Ryan wrote.

‘And I responded, “The whole thing honestly.”‘

‘The story, the spectacle, the spirituality, the beauty – this is moviemaking & storytelling at its absolute finest.’

‘I’ve said it a thousand times. Never doubt him,’ he wrote.

‘Avatar: The Way of Water is how you do epic blockbuster-ing. Emotional, visceral and as big as movies get.’

Collider.com – ‘A LOT of movie’

Perri Nemiroff from Collider called it ‘pretty incredible’ but remarked that the praise should be reserved for Cameron for his world-building, as well as actor Britain Dalton:

‘I had faith James Cameron would raise the bar w/ the effects but these visuals are mind-blowing. One stunning frame after the next. But the thing I dug most is how the technical feats always feel in service of character & world-building.

‘As for the story, it’s A LOT of movie & I’m eager for a 2nd viewing to revisit some details, but on 1st watch, it’s a mighty effective exploration of community & family dynamics. Returning cast is great, but the newcomers are major standouts, particularly Britain Dalton as Lo’ak.’

Reaction in the UK, meanwhile, has been slightly more critical.

The i newspaper – ‘A film to be more admired than loved’

Christina Newland, lead critic of the i newspaper, was similarly unimpressed, writing: ‘Avatar: The Way of Water is a film to be admired more than loved – some remarkable spectacle, some throwback to Titanic set pieces, some really lovely visual flourishes.