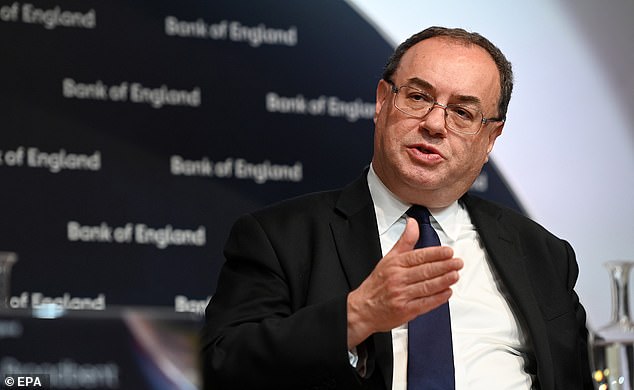 By Luke Barr For The Daily Mail

The Governor of the Bank of England has reiterated his warning to Britons against asking for pay rises as the UK prepares for inflation to hit 10 per cent later this year.

Andrew Bailey said that higher earners should ‘think and reflect’ before asking for salary hikes, that is despite a worsening cost-of-living crisis for workers. In February he also urged restraint on pay.

When grilled by MPs on the Treasury Committee yesterday, Bailey, who earns £570,000 a year, said he had rejected a pay increase for 2022.

Pay squeeze: Bank of England boss Andrew Bailey (pictured) said higher earners should ‘think and reflect’ before asking for salary hikes, despite a worsening cost of living crisis for workers

‘It is a societal question,’ he said. ‘But everybody must make their own judgement.’ Yesterday’s session in front of MPs saw the Governor claim that he was powerless to prevent soaring inflation amid growing accusations that he has been ‘asleep at the wheel’.

Bailey said: ‘To predict and forecast 10 per cent inflation and then say there’s not a lot we can do about 80 per cent of it is an extraordinarily difficult place to be.

‘We have to recognise the reality of the situation that we face.’

Pressure has been mounting on Bailey as the country braces for yet more inflation.

But he and his fellow Monetary Policy Committee members blamed outside forces when asked about the main drivers behind inflation, highlighting soaring energy prices and the war in Ukraine.

He said: ‘It’s notable that 80 per cent of the overshoot over the target is due to energy and tradeable goods.

‘A sequence of shocks like this, which have come one after another with no gaps between, is almost unprecedented.’

Bailey fielded questions just days after the Bank of England was criticised by Cabinet ministers for failing to keep rising inflation at bay.

While refusing to be drawn on the ministers’ political attacks, he did make a staunch defence of the Bank’s independence.

He said: ‘I am always concerned about ensuring the Bank’s defence is preserved and understood.This is the biggest test of the monetary policy framework in its 25 years.’

The Bank recently raised interest rates from 0.1 per cent to a 13-year high of 1 per cent in a bid to put a lid on prices.

But economists have warned that the higher inflation goes in the short-term, then the more likely it will become embedded across the economy.