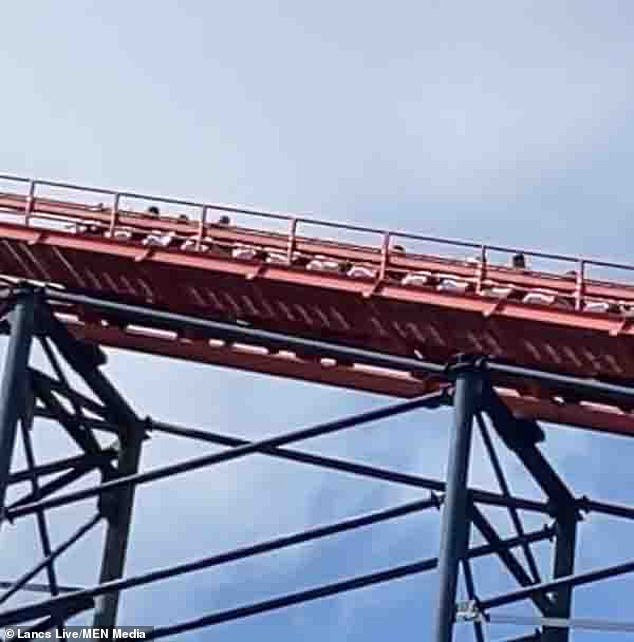 Thrillseekers were left stranded at the top of the Big One ride in Blackpool Pleasure Beach after it seemingly malfunction on its climb up to its very steep drop.

A video shows the moment today when the carriage came to a stop towards the top of the 235ft ride in the seaside town of Blackpool.

It then shows that people are walking up the ride -previously known as the Pepsi Max – using the stairs at the side to get access to the carriage.

An account on Twitter who posted the video had just had their turn on the ride, when they wrote on the social media platform: ‘When you’ve just got off the Big One and the next car gets stuck at the top.’

The Big One can be seen from across the North West coastline, called Flyde, which stretches from above Liverpool to below the Lake District due to its height and prominence on Blackpool’s skyline.

This is not the first time passengers have got stuck on a ride at the park.

On June 2 2021, a father and a five-year-old boy were among a group of people left stranded at the top of the wooden, twin-track Grand National ride.

In a scathing post on social media he slammed the attraction and called the ordeal ‘absolutely farcical’ after being offered free water, the Mirror reported at the time.

Staff at Pleasure Beach attraction had to climb up the ride, which was built in 1935 and stands 62 feet (19m) high, to escort nervous thrill seekers back to the ground.

Blackpool Pleasure Beach has been approached for comment on today’s situation.