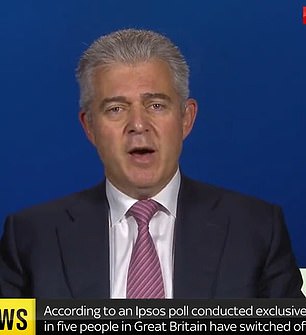 Ministers today swiped at the Bank of England chief after he issued an extraordinary warning about ‘apocalyptic’ food price rises.

Northern Ireland Secretary Brandon Lewis said he was ‘surprised’ Andrew Bailey had chosen to use the stark language as he discussed the inflation threat with MPs yesterday.

Giving evidence to the Treasury Select Committee, Mr Bailey said food prices were  a ‘major worry’ for the central bank, with particular concerns about wheat and cooking oil amid the Ukraine war.

He warned that a ‘very real income shock’ is coming this year as prices spiral at the fastest rate in 30 years and make millions of people poorer in real terms – admitting that the Bank is largely ‘helpless’ and unemployment will rise.

Asked in a round of interviews this morning about the warning of ‘apocalyptic’ pressures, Mr Lewis said: ‘I was surprised to see that particular turn of phrase, I have to say.

‘We do recognise … and as a constituency MP I see the challenges that some of my constituents face, that we all face.’

He told BBC Breakfast: ‘In my part of the world, we are all – the majority of people – on oil fire heating and you see that change in the price which has a big impact on people.

‘That’s why I think it is important as a Government we put in the packages of support we’ve put in and, as the Chancellor said, this is something we will keep under review because of the global pressures, as the Bank of England Governor said yesterday, that we’re seeing on economies around the world.’

Mr Lewis said on Sky News that supermarkets typically hedged against food prices, suggesting that prices could be kept lower for some time as a result. 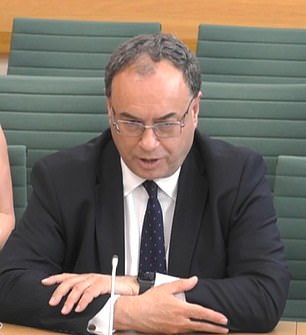 Soaring prices for staples have already had a huge impact on food production around the globe and been a key driver of runaway prices squeezing household budgets.

But Mr Bailey described how the finance minister in Kyiv had told him of Ukraine’s problems in shipping goods out of one of the world’s largest food producing countries as Russia continues its assault on the country.

Ukraine is estimated to supply 10 per cent of the world’s wheat and is also a major producer of sunflower oil.

‘The main driver of inflation and what brings it down is the very big, real income shock which is coming from outside forces and, particularly, energy prices and global goods prices,’ Mr Bailey told MPs.

‘That will have an impact on domestic demand and it will dampen activity, and I’m afraid it looks like it will increase unemployment.’

Asked by MPs if he felt ‘helpless’ to do anything about inflation, Mr Bailey replied ‘yes’.

Appearing before the House of Commons’ Treasury Committee, Mr Bailey warned that problems linked to the Ukraine conflict were ‘getting worse’.

In his exchanges with MPs, the Governor doubled down on his previous claim that workers should not be demanding big pay rises – despite the cost-of-living crisis – in an attempt to dampen rocketing inflation.

Mr Bailey, who earns £570,000 a year as the top boss at Threadneedle Street, told MPs that high earners should ‘think and reflect’ before asking for large salary increases.

The Governor also used the Treasury Committee session to lash back at criticism of the Bank’s handling of sky-high inflation rates.

Mr Bailey told MPs Ukraine’s conflict with Russia was ‘the big risk’ when it came to further rises in prices.

He said: ‘One is the risk of a further energy price shock, which would come from the cutting off of gas and distillates, such as products like diesel.

‘And then, the one which I might sound rather apocalyptic about, is food.

‘Two things the finance minister said is that there is food in store but they can’t get it out.

‘While he was optimistic about crop planting, as a major supplier of wheat and cooking oil, he said we have no way of shipping it out and that is getting worse.

Earlier this year, Mr Bailey provoked a furious backlash over his claim workers should not to ask for big pay rises in order to help stop prices rising out of control.

He did not shy away from those comments in his appearance before MPs today, although he insisted he was not ‘preaching’ on the issue.

‘I spoke in an interview about this,’ he said.

‘I do think people, particularly people who are on higher earnings, should think and reflect on asking for high wage increases.

‘It’s a societal question. But I am not preaching about this. I was asked if I have taken a pay rise myself this year and I said no, I had asked the Bank not to give me one, because I felt that was the right thing for me personally.

‘But everybody must make their own judgement on that. It’s not for me to go around telling people what to do.

‘In that sense I know I may have been interpreted as doing that, but I wasn’t. What I was saying is that maybe people should reflect on it, particularly people in that situation.’

The Governor denied the Bank had been ‘asleep at the wheel’ on inflation as he faced the grilling by MPs.

He lashed out at criticism in ‘hindsight’, but conceded the Bank is facing the biggest challenge to its structures for 25 years.

Threadneedle Street has been urged to admit a ‘mistake’ in holding off earlier action, having insisted for months that inflation was ‘transient’.

In tetchy exchanges, Committee chair Mel Stride asked whether the Bank had been ‘asleep at the wheel’.

But Mr Bailey said the economists had been making ‘fine and hard judgments’ – insisting that there was no way they could have ‘foreseen’ the Ukraine war.

‘As you say, there have been a series of supply shocks and most recently with the impact of the war, Russia’s invasion of Ukraine,’ he said.

‘We can’t predict things like wars – that’s not in anybody’s power.

‘I don’t think we could have done anything differently; we could not have seen a war with Ukraine.’

There have been claims of Cabinet unrest about the performance of the Bank, which has now raised interest rates to 1 per cent and is predicting headline CPI inflation will top 10 per cent this year. 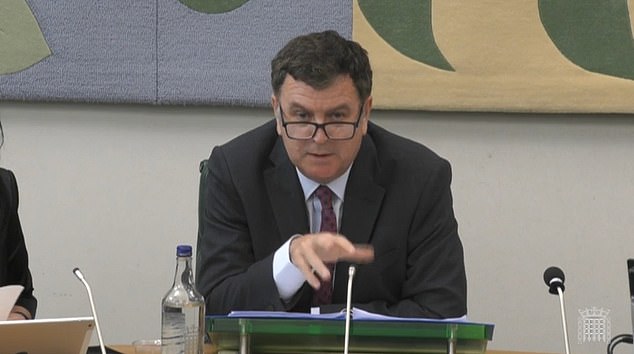 In tetchy exchanges, Treasury Committee chair Mel Stride asked whether the Bank had been ‘asleep at the wheel’ on soaring inflation

Some have even suggested a rethink of its independent status, as Britons are hammered by rampant price rises and Rishi Sunak comes under huge pressure to offer a bigger bailout.

However, the Governor cautioned that could be disastrous, saying independence ‘matter more than ever’ when times are difficult.

Mr Bailey shrugged off criticism from politicians, saying it was ‘not a world that I particularly respond to at all’.

He said he was ‘always’ concerned about ensuring the Bank’s independence.

‘This is the biggest test of the monetary policy framework that we have had in 25 years, no question about that,’ he said.

‘What I would say to these people is that this is when both the independence of the bank and the target framework and the nominal anchor matter more than ever, frankly. More than in the good times, the easy times as it were.’