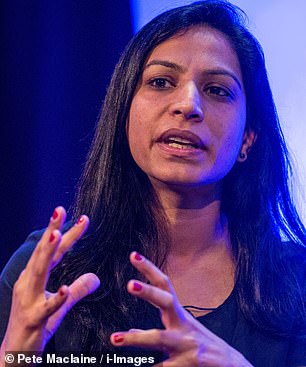 A fierce critic of Brexit has been given one of the most powerful jobs overseeing the economy. International economics expert Swati Dhingra has been appointed to the Bank of England’s Monetary Policy Committee – the nine-strong panel that sets interest rates in the UK.

The appointment – by Chancellor Rishi Sunak – comes a week after the Bank warned inflation will top 10 per cent this year and tip the economy into recession. The MPC is charged with keeping inflation at 2 per cent and is frantically raising interest rates to bring it back under control.

Dhingra, an associate professor of economics at the London School of Economics, will join the MPC in August.

She replaces outgoing member Michael Saunders, who is leaving after six years at the Bank of England.

In the past, Dhingra has said ‘from an economic perspective, the best policy would be to cancel Brexit’.

In a paper earlier this year, she said Brexit was ‘the biggest reversal of deep international economic integration in the modern era’ and warned leaving the EU had ‘a sizeable negative effect on the UK economy’.

Dhingra’s appointment takes the number of women sitting on the committee to three, joining Catherine Mann and Silvana Tenreyro.