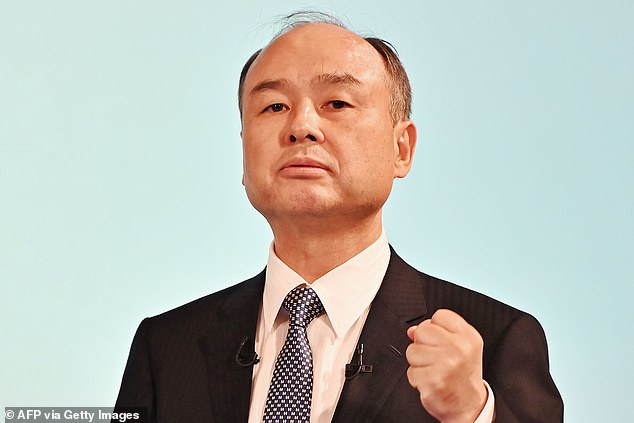 UK investors could have a chance to buy shares in Arm even if it decides not to list in London.

If the Cambridge-based computer chip maker opts instead to list its shares on the US stock market, investors here could still be able to buy shares through a retail offering, according to markets technology platform PrimaryBid.

The firm, which allows retail investors to buy shares in companies during fundraisings and new listings, has proposed the idea to government ministers.

US focused: Softbank founder Masayoshi Son (pictured) is thought to be planning to float Arm on Wall Street with a value of at least £48bn

‘A London listing would be ideal but there’s no reason the British public should miss out,’ he told Bloomberg.

The proposal follows a similar arrangement made by PrimaryBid for the listing of member’s club owner Soho House in the US in 2021.

The pitch comes amid fading hopes Arm’s owner, Japanese conglomerate SoftBank, which coincidentally is PrimaryBid’s largest investor, will opt for a UK listing and instead float the company on Wall Street with a value of at least £48billion.

Prime Minister Rishi Sunak has been lobbying intensely to convince SoftBank founder Masayoshi Son to list Arm’s stock in the UK through a dual listing of the shares in London and New York to boost the City’s competitiveness post-Brexit.

There were also arguments a dual listing would allow Arm to join FTSE stock market indices, meaning it could be bought by tracker funds, as well as increasing the ability of its shares to be traded.

But Son has so far focused on a US listing due to its deep pool of investors and higher valuations.

Arm is a critical player in the global computer chip industry, with its designs used across a range of electronics from phones to cars.

Its processor designs are used in around 95 per cent of mobile phones, according to the group’s website.

Its importance has become even more acute amid a global shortage of computer chips and growing worries that Taiwan, the world’s biggest supplier, could be invaded by China.

A PrimaryBid offering would be something of a consolation prize for UK investors after the battle to keep Arm closer to its roots in Cambridge, where it was set up in the 1970s as Acorn Computers.

Microsoft profit drops 12% to $16.4B as revenue grows at its slowest pace in six years
Man in his 50s is pulled from water after drowning at Crescent Head NSW
Advertisement