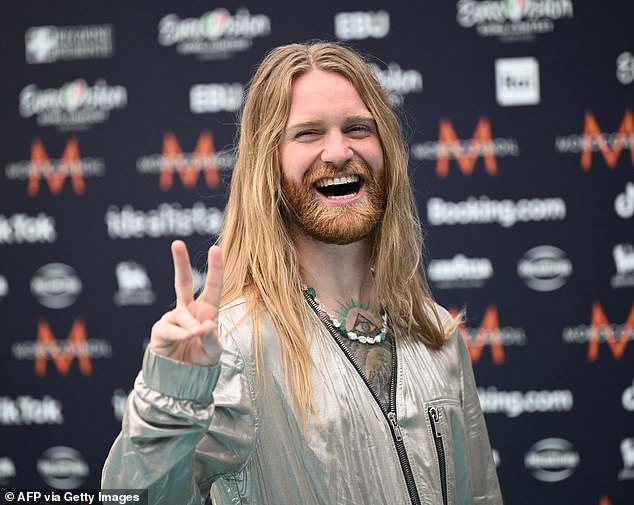 By Maggie Pagano For The Daily Mail

Thank you Sam Ryder. Your Space Man song coming second to Ukraine in the Eurovision Song Contest was just the tonic to cheer us up.

We Brits are simple folk so the catchy song plus douze points from our continental neighbours will go some way to healing post-Brexit rifts and lifting spirits.

Rishi Sunak should take a lesson from Ryder’s win. He must don his space helmet and produce a winning battle plan to lift confidence and help stave off a recession.

Sunak knows the heat is on him to do ‘something’. Writing in a newspaper, the Chancellor promised to do ‘everything in his power’ to help people with the cost of living crisis which is being fuelled by inflation fed by soaring energy and food prices.

The question is what is this ‘something’? Until now, Sunak has taken the hawkish route, hoping to balance the budget at a time of extreme fragility. He resisted calls to drop the national insurance hikes introduced in the Spring Statement and went ahead with freezing tax thresholds.

These are costly moves. A new report estimates that one in five workers will be paying either a higher or top-rate tax by 2024. This suggests 2.5m more taxpayers will be taken into the 40 per cent or 45 per cent tax bracket because of the freeze on thresholds coupled with higher wages.

In total, a record 6.8m workers will be paying higher rates in two years’ time, double the number when the Conservatives came to power 12 years ago. Nor do we need reminding that the tax burden is now the highest it has been for 70 years. Is this the legacy that a decade and more of Conservative government wants to leave behind?

Does the Government want to go down in history as the one that jacked up taxes when we are being hit by rocketing inflation, and for reasons out of our control? Hardly: a reputation for economic competence is not easily won back.

Yet Sunak has the power to make changes. He should start with a broad pick ‘n’ mix package: benefits should be increased, the huge subsidies on energy bills should be cut while the 5 per cent VAT could be dropped.

If the Chancellor were really bold, he would drop the NI rise altogether. Ironically, tax receipts are looking far healthier than expected so the Treasury has more room to manoeuvre than it lets on and could borrow more to finance spending.

But Sunak should resist pressure for a windfall tax on the oil and gas giants. This might be a popular one-off measure yet would do little to encourage those companies to invest in exploration, which will be of greater long-term benefit to customers.

The Chancellor also needs to get tougher with the Bank of England’s Andrew Bailey. The governor’s reputation has been seriously dented by the Bank’s bad judgement in believing inflation to be ‘transitory’ and not raising interest rates earlier to keep target inflation at 2 per cent.

Now the Treasury should put pressure on Bailey and the monetary policy committee to get ahead of the curve by winding down the quantitative easing programme immediately and start communicating better with the markets – after all, central banking is at heart a confidence trick.

And if Sunak wants to win back confidence, he too needs to make a U-turn and present an emergency budget of some kind. It doesn’t have to be an embarrassing U-turn for him, and it’s certainly nowhere near as embarrassing as the disclosure that his wife had non-dom status. He survived that furore so he is surely big enough to admit that when the facts change, you change your mind. That’s what smart people do.