This is the moment that plainclothes NYPD officers shot and killed a man who allegedly fired an airsoft gun at them in the Bronx Friday night.

Surveillance footage shows the unidentified man, 51, walking down the sidewalk with a weapon in his hand at about 7pm.

A plainclothes officer approaches him from behind an outdoor seating area and appears to yell something while pointing his gun, according to video obtained by the New York Post.

The man, who seems to have been startled by someone off camera, runs toward the officer and quickly collapses on the ground. He pushes his weapon away from him as two other cops swarm in.

He was shot five times in the torso.

Eyewitnesses say police tried resuscitating the man on the scene. He was taken to Lincoln Hospital, where he died of his injuries.

Crime in New York City is up 41.26 percent from this time last year. Last week, Mayor Eric Adams admitted that, ‘The bad guys are outpacing us,’ as he called for the Biden administration to revoke the federal firearms license of a manufacturer that sells parts and kits for ghost guns.

The unidentified man, 51, is seen walking onto the sidewalk at Seneca Avenue and Hunts Point Avenue with a black weapon in his hand 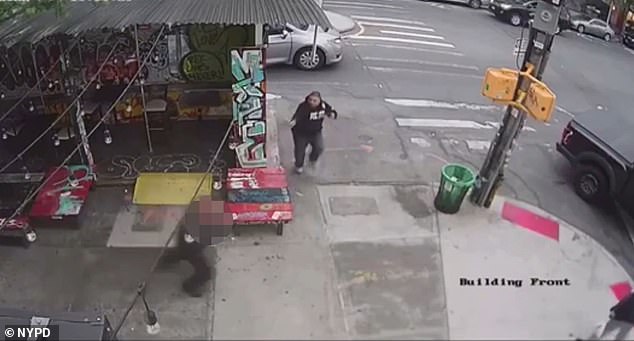 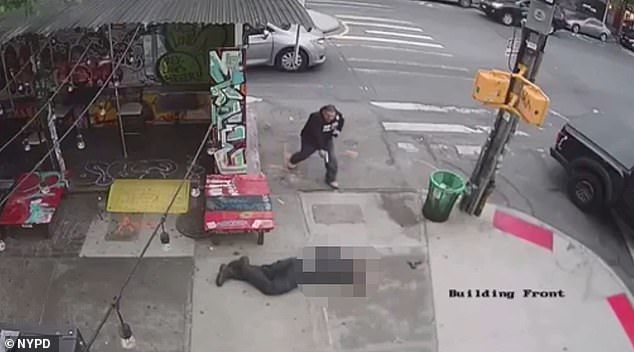 The man quickly collapses and pushes his airsoft gun away. He was shot five times in the torso and later died from his injuries at a nearby hospital 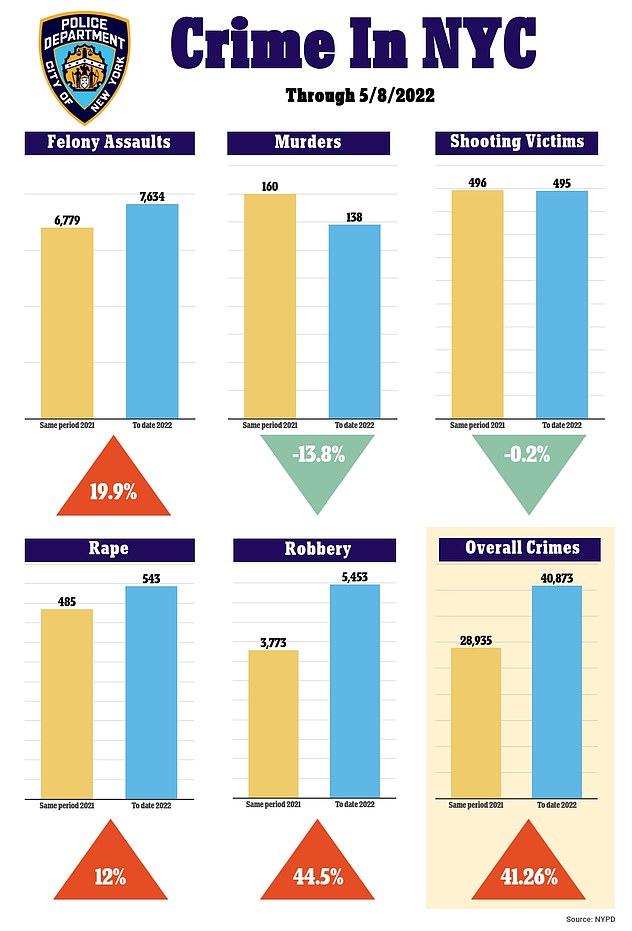 Critics say the arrest is the wrong approach to reduce crime in New York City, which is up by 41.26 percent from last year

Police said they were carrying out an unrelated narcotics investigation near Seneca Avenue and Hunts Point Avenue when an officer overheard the man arguing and saying he was going to get a gun from his car.

The officer passed the information over to other detectives, who later spotted the man leaving a black Ford pickup truck at the intersection.

He was allegedly given the verbal command, ‘Police, don’t move!’

The NYPD says at least one officer was wearing a vest with a visible NYPD shield on it.

Assistant Chief Philip Rivera added that the suspect raised his gun and fired at a detective, barely missing his head.

Officers fired 10 rounds, shooting him five times in the torso.

The father of an eyewitness told the Post that his daughter saw police try to resuscitate him on the scene.

‘The police – they were pumping his chest. When one was tired the other came and was pumping him,’ the man said.

The man was carrying an airsoft pistol, which fire plastic pellets using a gas, spring or electrical system and are usually used for sport, target practice or paintball gaming.

The nonlethal weapons have been at the center of other officer-involved shootings, such as the killing of 14-year-old Antonio Arce in Tempe, Arizona. 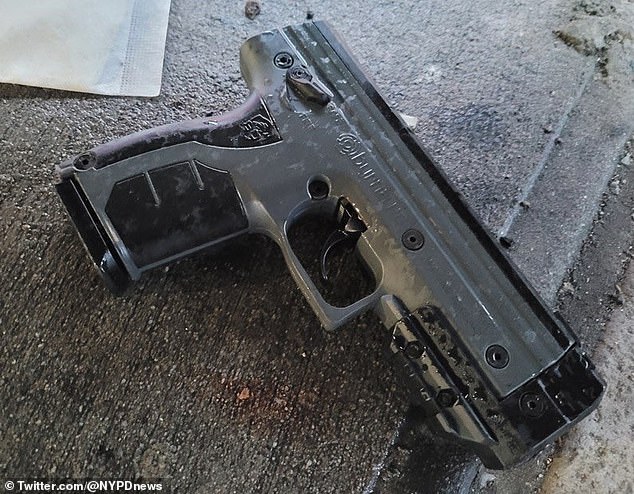 The man was wielding an airsoft weapon. The guns fire plastic pellets using a gas, spring or electrical system and are usually used for sport, target practice or paintball gaming 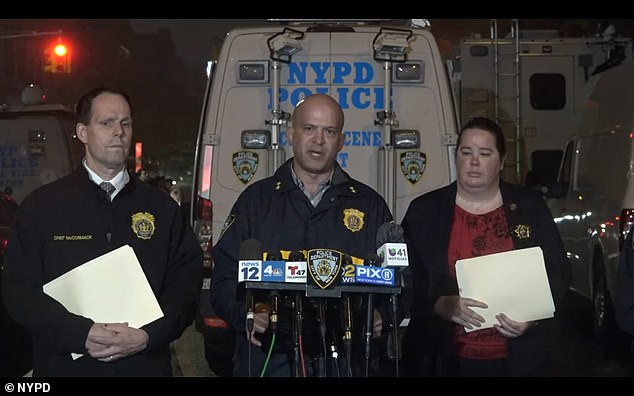 At a press conference on Friday, police said the man was overheard threatening to get a gun from his car while police dealt with an unrelated narcotics investigation

The teenager ran from an officer while holding an airsoft gun in 2019.

The officer who shot Arce was not criminally charged. The Tempe City Council later approved a $2 million settlement for his family, the Arizona Republic reports.

In New York City, crime continues an upward trend that began in the early days of the COVID-19 pandemic.

Mayor Eric Adams is blaming ghost guns for a lot of the gun-fueled crime.

Since January alone, the NYPD has already taken approximately 200 ghost guns off the streets, up from 148 in 2020. NYPD also reports that approximately 90 percent of ghost guns year after year include Polymer80 parts.

He joined gun control group Everytown for Gun Safety on Wednesday to publicly call for the Bureau of Alcohol, Tobacco, Firearms and Explosives to revoke the license of Polymer80, Inc., alleging the company has violated federal gun laws requiring background checks of purchasers and serial numbers, among other measures. 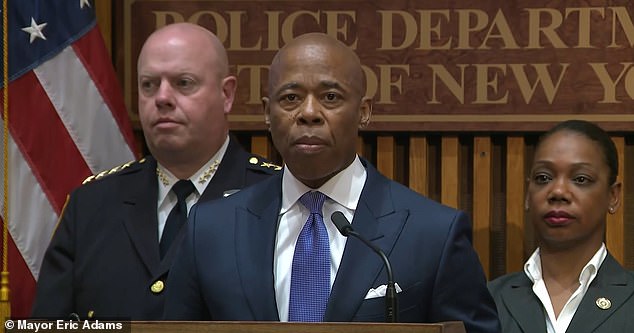 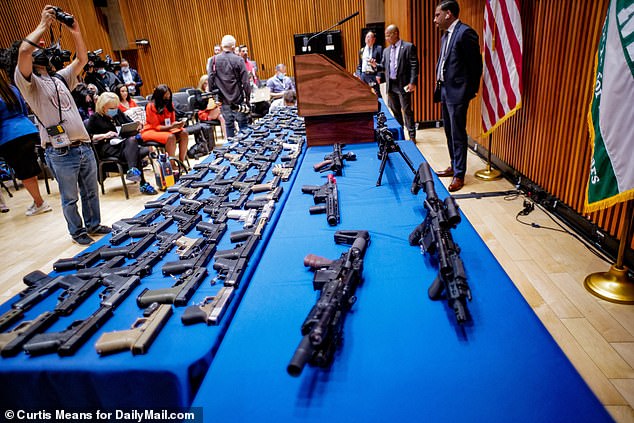 ‘We must get ghost guns out of our communities, and those that manufacture them must be shut down,’ said Mayor Adams.

‘The bad guys are outpacing us,’ he continued. ‘We are too slow to identify and correct the loopholes in violence.’

Adams has also warned New Yorkers that they should be ‘very afraid’ of what will happen in their city if the Supreme Court strikes down a long-held state law requiring gun owners to have a license in order to carry a firearm.

America’s highest court – which has come under fire in recent weeks for a leaked draft that would overturn women’s federal abortion rights – is expected to issue a decision in the case, brought by a New York gun group that wants the permit law repealed, in the coming weeks.

The law the group seeks to repeal took effect in 1911, and requires licenses for New Yorkers to possess firearms small enough to be concealed.

During a press conference in Harlem on Thursday, Adams told reporters that he suspects the court will toss the century-old gun guidance.

‘After what we saw the Supreme Court did on abortion,’ Adams said, ‘we should be very afraid.’