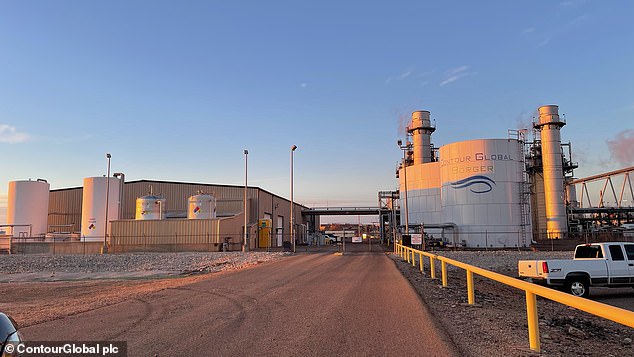 ContourGlobal has announced a dividend hike after reporting an above-forecast performance during the opening quarter of the year.

Shareholders in the power generation business are set to receive the equivalent of $32.2million between them through a 4.92 cents per share dividend payout, a 10 per cent rise on the same period last year, in four weeks’ time.

The company’s chief executive Joseph Brandt said this reward was supported by high operating cash flows and adjusted underlying earnings surging by $28million to $208.3million in the first three months of 2022.

Gas boost: ContourGlobal revealed its revenues jumped by more than half to $652.2million on the back of its thermal arm producing just over 4,700 gigawatt-hours of power

Most of the growth in earnings came from the firm’s thermal division, with its acquisitions of gas-fired plants from US-based Western Energy Group and Mexican chemical manufacturer Alpek each delivering a boost of $11million.

Another $8million boost came from its Austrian wind turbine arm, although it lost the same amount of money from an unfavourable foreign exchange swing.

The considerable expansion in underlying profits helped total funds from operations grow by 9 per cent to $112million despite lower interest gains and a $20million cost from larger distributions to minority investors.

It also achieved greater income from its operations even though the amount of time during the first quarter that electricity was produced by its renewable and thermal fleets declined.

This was due to power outages at its hydropower complex in Armenia and its natural gas-fired plants in Trinidad and Tobago and Arrubal, Spain, none of which the firm claims had any ‘meaningful financial impacts.’

ContourGlobal revealed its revenues jumped by more than half to $652.2million on the back of its thermal arm producing just over 4,700 gigawatt-hours of power, a 40 per cent increase on last year.

The FTSE 250 company’s results come amidst soaring energy costs across the world and calls among campaigners and opposition politicians in the UK for a windfall tax on the profits of oil and gas giants like BP and Shell.

Much of the rise in gas prices has been down to the global economic recovery from the Covid-19 pandemic and weak supply in Europe, following a cold European winter in 2020/21, and a summer of low winds that led to less renewable electricity being generated.

However, it has also been exacerbated by strong demand from Asia, and Russia’s recent full-scale invasion of Ukraine, while prices in Britain have been additionally affected by a fire which broke out at an electricity interconnector in Kent.

Nonethless, the London-listed firm has a positive financial outlook, thanks to what it said was a ‘business model is highly resilient with stable and predictable cashflows.’

It added: ‘The current financial year has started positively and overall trading across the Group is ahead of the Board’s expectation and continues to underpin the Board’s confidence in the continued growth in dividends to shareholders.’

Amidst a broader upturn on the London markets, ContourGlobal shares closed trading 1.3 per cent up at £1.92 on Friday.