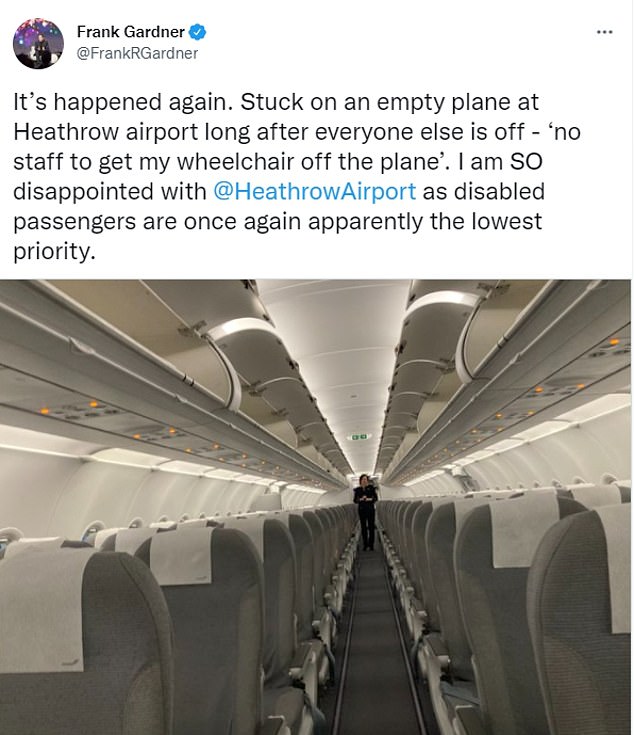 A BBC journalist in a wheelchair slammed Heathrow today after being left on an empty plane – accusing the treating disabled passengers as ‘lowest priority’.

Security correspondent Frank Gardner was left on the empty British Airways flight from Estonia last night and says he was told that no staff were available to help him get off the plane.

This is the fourth time he says this has happened to him since he began using a wheelchair in 2004 – after being shot six times by militants while reporting in Saudi Arabia. 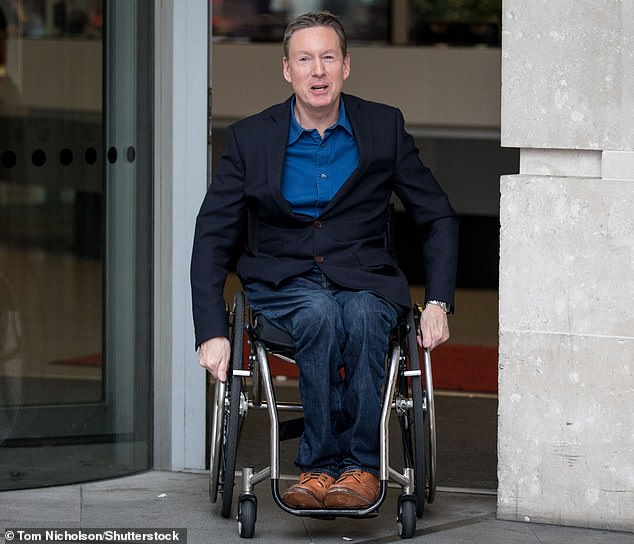 The veteran journalist, 60, tweeted this morning: ‘It’s happened again. Stuck on an empty plane at Heathrow airport long after everyone else is off — ‘no staff to get my wheelchair off the plane’.

‘I am SO disappointed with @HeathrowAirport as disabled passengers are once again apparently the lowest priority.’

Around 22 minutes after his original tweet, he confirmed he was ‘in the terminal while I’m guessing all other passengers are on their way home’.

In 2018, Mr Gardner said he had been left on planes twice in six months – with Heathrow pledging to investigate after apologising.

At the time, he said Heathrow had a ‘casual disregard for disabled people’ after staff lost his wheelchair and left him stuck on his plane.

He said he was left stranded for ‘100 minutes’ before he could get off his flight from Ethiopia on March 24, 2018. 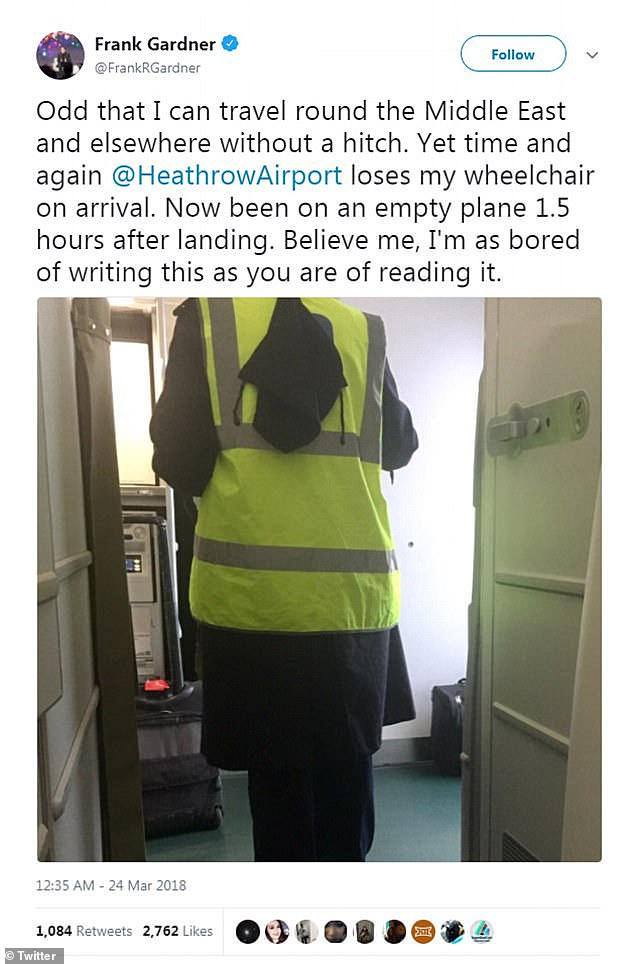 Staff delivered Mr Gardner wheelchair to the terminal building instead of the plane door, leaving him stuck.

Mr Gardner said his latest issues are ‘incredibly minor’ when the humanitarian situation in Ukraine is considered but that it was ‘objectionable’ how frequent ‘cr*p* treatment’ is given to disabled people.

Heathrow apologised at the time. He was also left on an easyJet flight at Gatwick in 2017. The airline and airport both pledged to investigate.

In 2004, Mr Gardner and his cameraman Simon Cumbers were working in Saudi Arabia, finishing a piece for television.

They were shot six times at close range by a group of Al Qaeda sympathisers and Cumbers was killed while Gardner was left for dead.

His legs have minimal sensation from the knees down, while above the knee he can feel them but can ‘barely move them’.

Despite his injuries, Mr Gardner returned to work and was awarded an OBE for services to journalism in 2005.

He continued to cover stories in danger zones around the world, including Afghanistan and Colombia.

Mr Garden was the BBC Middle East Correspondent at the time of the 9/11 terrorist attacks and covered the aftermath – including the beginning of the War on Terror for the Corporation.

Adel Al-Dhubaiti, the man who murdered his colleague, was later caught and sentenced to death, and executed in Saudi Arabia in January 2016.