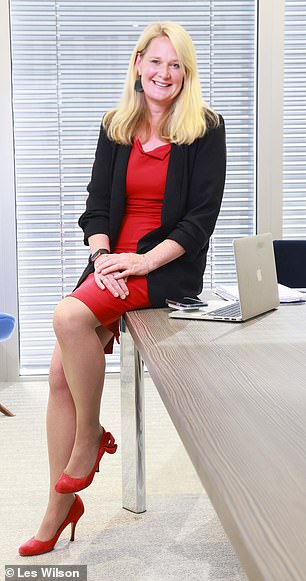 Ambition: Sam Smith believes that FinnCap is on the cusp of breaking into the City’s big league

The world of stockbroking is notorious for testosterone-fuelled decisions, fast money and heavy boozing. In short, it has for many years been the preserve of the alpha male. And Sam Smith, founder and chief executive at FinnCap – one of the City’s most renowned mid-cap brokers – has spent her career navigating her way through it all.

‘There was no senior female person to have as a role model 15 years ago, certainly in financial services,’ she says when she found herself at the top of her industry.

Despite being supremely confident in person, at first she aped the manner of the male bosses she had encountered along the way.

‘My style was quite masculine. I began to wear different clothes and people would say, ‘You’re getting more cold’ despite me being a warm and friendly person.’

It was a leadership approach she now deeply regrets. And she reveals how she had a life-changing epiphany when one of her colleagues pulled her up on her behaviour.

‘There was a moment when someone said to me, ‘You’re scary’,’ she says. ‘I had to do a double take.

‘That’s when I thought, ‘I’ve tried to do this copying thing without realising.’ I had become short and sharp. The chatting and laughing and joking had disappeared.

‘I had a sense check. I thought, ‘No, I want this firm to be different.’ That’s the moment when the trouser suits went in the bin. A chief executive does not have to be an aggressive ball-breaker.’

Smith, a single mother, understands how much pressure women are under. Of the company’s 149 employees, 38 per cent are women – an impressive ratio compared to some other City firms. She says FinnCap attracts women to the industry by putting in place policies that focus on quality of work, rather than the amount of hours put in. Women (and men) in her office are encouraged to leave at 5pm and managers do not pressure them to attend dinners or late business functions.

‘There’s none of this watching when you walk out the door at 5pm and people making comments about not attending after-work events,’ she says. ‘That’s the thing I have a real problem with.

‘The reason we are winning clients is because there is something different about us.’

But, at the same time, she is not troubled by the drinking culture in the City. Recently, insurance broker Atrium was fined £1million for regular ‘boys’ nights out’ where heavy drinking and inappropriate comments were made to female staff. Lloyd’s of London said the nights out were ‘unacceptable’.

Smith says she has never witnessed that particular brand of rowdy culture. ‘In my 20s I would definitely have been out [socialising],’ she says. ‘This is a very sociable industry. Going out with your clients, having boozy nights. That was definitely a thing. And my team still does that.’

But she adds: ‘I was never aware of the whole strip club scene.’ It’s a reference to countless stories of City drinking sessions that ended up in seedy night spots.

Smith is dressed immaculately in a stylish red dress and heels, as she sits in her new office in the heart of the City which has recently been refurbished. She admits that looking after an eight-year-old daughter and living in Clapham, South West London, she does not have much spare time.

She plays tennis and enjoys cooking. But, like most entrepreneurs, her main focus is on growing her business.

In recent years, FinnCap has sold up-market swimwear company Orlebar Brown to Chanel and advised on Pimlico Plumbers’ acquisition by US firm Neighborly.

Last year alone it helped its clients raise £700million to secure funding during the pandemic and advised on almost 30 merger and acquisition transactions worth around £2billion.

Smith, who owns 10 per cent of the firm, was aged just 33 when she took the reins at FinnCap – newly formed after a management buyout. Now 47, she says the move felt natural to her. ‘I didn’t see it as a risk at the time,’ she says.

‘My friends said why have you not taken a big job in a big bank where your career is sorted. They thought I was mad. I could only see risk in working for a big bank where I have no control over my life or time.’

But she admits the journey has been far from easy. Two weeks after completing the management buy-out of FinnCap in 2007, Northern Rock collapsed. The financial crisis years were ‘hairy’ and Smith would wake up in the middle of the night worried that the company was running out of cash. ‘My head of compliance and I would look at the cash situation ten times a day,’ she adds. But the sweat and hard work have paid off and the company has grown rapidly.

Revenues for the firm were up 12 per cent on the previous year to £52million. Smith is worried about inflation and the cost-of-living crisis – the effect of which has not yet been fully felt.

And she believes company results are set to get ugly in the year ahead and warns investors are not prepared. But despite these choppy waters she reckons FinnCap is on the cusp of breaking into the City’s big league.

‘I hate football but I tell my team we’re now in Project Premiership.

‘We are like Bournemouth [this month promoted to the Premier League ahead of next season]. We’ve got some momentum. Now it is about competing with the big guys.’

One Mile, Ipswich: Suspected gunman shot dead by police after bursting out of home holding a firearm
Police launch hunt for missing girl, 15, who was last seen at McDonald’s in Manchester city centre
Advertisement