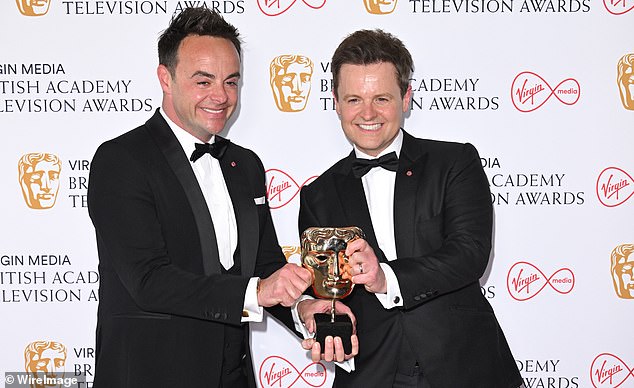 By Farah Khalique For The Daily Mail

ITV is bracing for a tough summer as advertising revenues dry up following a robust start to the year.

The broadcaster behind Coronation Street, Ant and Dec’s shows and Love Island said revenues in the first quarter were 16 per cent higher than 12 months earlier.

But the summer will be ‘much tougher’ after it received a boost last year from the Euro 2020 football tournament.

ITV, which makes the Coronation Street and Ant and Dec’s shows (pictured) said revenues in the first quarter were 16% higher than 12 months earlier

Traditional advertising revenues are harder to come by in the digital age.

Second-quarter revenue is expected to be down around 6 per cent on a year ago. Even though it rose 9 per cent in April, ITV forecasts an 8 per cent drop in May and a 15 per cent fall in June.

ITV said: ‘As expected, advertising comparatives get much tougher in the second and third quarter and we are mindful of the macro-economic and geopolitical uncertainty.’

Chief executive Dame Carolyn McCall said it was on track to launch the on-demand platform ITVX in the final three months of the year.

It will replace the ITV Hub and will give subscribers the choice of watching ad-funded content free or buy ad-free content, such as Britbox.

McCall says it will deliver at least £750million in digital revenue by 2026 but analysts are sceptical.

Streamers are battling for market share as households tighten their belts in anticipation of a recession.

Netflix lost 200,000 subscribers in the first quarter and expects to lose another 2m this quarter.

Sophie Lund-Yates, analyst at Hargreaves Lansdown, said: ‘As Netflix has shown, streaming is an incredibly competitive place to be, and even the industry stalwarts are struggling.

The true final scale of ITV’s digital business is hard to predict, but any market share will be very hard-won.’

Overall, it is faring better than a year ago. Total revenue topped £1billion in the first three months of the year, up from £856million a year prior.

Advertising pushed external revenues up 18 per cent to £834million, while ITV Studios – the production arm – saw revenues climb by 23 per cent to £458million.

Amber Heard says she met Elon Musk at the Met Gala in 2016 after Johnny Depp ‘stood her up’
Blackpool’s Jake Daniels, 17, is first active male pro footballer in England to come out as gay
Advertisement