Joe Biden, who has faced criticism over the 40-year high rates which hit 8.3 percent, tweeted on Friday that taxing corporations more would help ease the economic strain impacting Americans.

‘You want to bring down inflation? Let’s make sure the wealthiest corporations pay their fair share,’ Biden tweeted.

Bezos responded within hours, claiming the president was conflating two seperate issues that only amounted to misdirection, and should be held accountable by the Department of Homeland Security’s Disinformation Board.

‘The newly created Disinformation Board should review this tweet, or maybe they need to form a new Non Sequitur Board instead,’ Bezos tweeted.

‘Raising corp taxes is fine to discuss. Taming inflation is critical to discuss. Mushing them together is just misdirection.’

The Disinformation Board was established last month to combat the spread of disinformation in minority communities and to provides communities with resources and tools to help prevent individuals from radicalizing to violence.

The board, however, has drawn much criticism as it was estblished ahead of the 2022 midterms, where the president’s party is expected to suffer major losses, and appears hypocritcal as the Biden administration has been slammed for trying to spin issues in their favor.

The administration had previously claimed that the war in Ukraine was causing inflation and gas prices to soar despite both already being significantly high prior to Russia’s invasion.

Rather than corporate taxes, interest rates have been sighted as the key figure to reign in to bring down inflation.

The Federal Reserve has begun raising interest rates to slow borrowing and spending enough to cool inflation following the height of the pandemic.

‘Inflation is much too high, and we understand the hardship it is causing, and we are moving expeditiously to bring it back down,’ Fed Chairman Jerome Powell said on earlier this week. 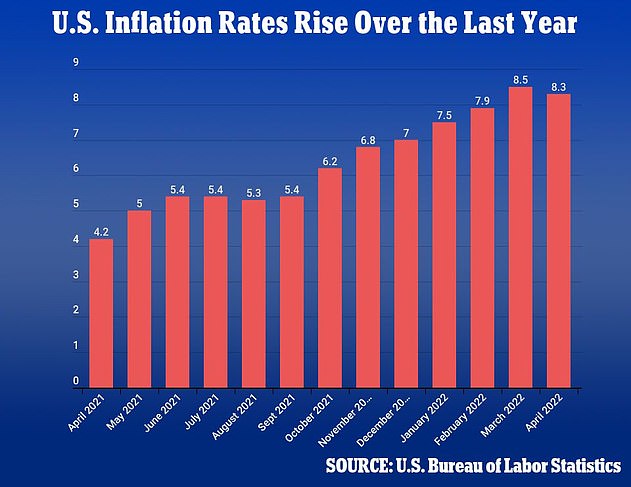 Inflation began to soar in April 2021, meaning that annual increases are now starting from a higher base level

In an interview with Marketplace on Thursday, he was asked what he would say to someone who will lose their job or miss out on a pay rise as the Fed tried to choke off inflationary spending.

‘So I would say that we fully understand and appreciate how painful inflation is, and that we have the tools and the resolve to get it down to two percent, and that we’re going to do that.

‘I will also say that the process of getting inflation down to two percent will also include some pain, but ultimately the most painful thing would be if we were to fail to deal with it and inflation were to get entrenched in the economy at high levels, and we know what that’s like.

‘And that’s just people losing the value of their paycheck to high inflation and, ultimately, we’d have to go through a much deeper downturn. And so we really need to avoid that.’

The Labor Department’s report on Wednesday said that the consumer price index increased 0.3 percent in April from the month before, for a 8.3 percent gain from a year ago, compared to March’s 8.5 percent increase.

The food index increased 9.4 percent from last year, the largest 12-month increase since 1981, and the energy index soared 30.3 percent from a year ago.

However, in a troubling sign inflation is becoming more entrenched, core prices jumped 0.6 percent from March to April – twice the 0.3 percent rise from February to March.

Along with inflation, Biden has come underfire for establishing the Disinformation Board, which opponents ‘Orwellian’ and ‘un-American.’

Republican House leader Kevin McCarthy said on Wednesday that Democrats want to control the information that Americans’ are able to access through the new board.

‘Do they not trust Americans enough that they want to control that much of our lives?’ the Republican House leader questioned during a press briefing on the new Homeland Security board.

‘We watched it time and again,’ McCarthy continued. ‘Why would they want to control the information? Because they don’t want you to know the truth.’

He claimed that Democrats are trying to conceal information pushed by the right, which leftists deem are likely all conspiracies. McCarthy says this includes distracting from record-high inflation and the facts surrounding COVID-19.

‘The president’s Ministry of truth is an un-American abuse of power,’ McCarthy said during a press briefing with other GOP lawmakers, including pro-MAGA Representatives Lauren Boebert of Colorado and Jim Jordan of Ohio.

Boebert said at the press briefing at the Capitol on Wednesday: ‘Make no mistake, free speech is under attack here in America.’

The board’s head, Nina Jankowicz, was also slammed by Republicans for a slew of previous comments that clearly show her bias against Donald Trump and her pushing now debunked claims about ties between the former president’s campaign and Russia.

‘She actively promoted information that was false,’ McCarthy said of Jankowicz, claiming her new ‘role’ is to ‘monitor information’ and decide what Americans should believe is true.

June 2016 – Shared a linked to a now-deleted Medium post featuring a mural of Donald Trump kissing Russian President Vladimir Putin. ‘Putin’s Russia is not a country that any American voter would seek to emulate. The United States should not elect a demagogue who intends to do exactly that,’ she wrote at the time.

July 2016 –  Jankowicz linked to a Foer piece titled ‘Putin’s Puppet,’ and tweeted: ‘But do we want a president that has so many shady and cozy ties with Russia? No. So yeah, this piece is a must-read.’

– She also shared a link to a Clinton campaign article along with the comment’: ‘Trump’s bizarre relationship with Russia … Foreign policy matters.’

September 2016 – ‘Trump’s Kremlin ties don’t end at Manafort. This is serious people,’ she warned in a tweet.

November 1, 2016 – ‘Husband texted me ‘you have news to wake up to.’ Never thought it would be this. Confirms our worst fears about Trump. I am horrified, Jankowicz tweeted. Came in response to a tweet from Hillary Clinton’s campaign claiming Trump has a ‘secret server’ he uses to ‘communicate privately with a Putin-tied Russian bank called Alfa Bank.’

November 6, 2016 – Jankowicz said that ‘what started months ago as me making jokes about Donald Trump’s ‘bromance’ with Putin has actually become an existential threat to our country’.

December 2016 – Called Trump ‘Pinocchio’ in response to a Biden official writing ‘it is not at all far-fetched to ask whether Trump is indeed the ‘puppet’ Secretary Clinton mockingly named him.’

March 2017 – Months after Trump took office, Jankowicz tweeted ‘Preach’ in response to a screenshot from a Washington Post article titled ‘The Clinton campaign warned you about Russia. But nobody listened to us’ and written by Clinton campaign communication director Jennifer Palmieri.

June 2020 – Jankowicz directly cited Steele  Dossier claims in her book How to Lose the Information War: Russia, Fake News, and the Future of Conflict

October 15, 2020 – Jankowicz told the Associated Press that there were questions about whether the infamous laptop belonged to Hunter Biden.

‘We should view it as a Trump campaign product,’ Jankowicz said at the time of the interview and pointed to involvement from former New York Mayor Rudy Giuliani and Trump associate Steve Bannon.

Putin warns Finland ‘made a mistake’ and Lavrov says ‘total hybrid war’ has been declared on Russia
Woman dog walker, 41, and three dogs are killed in Chelsea road crash
Advertisement