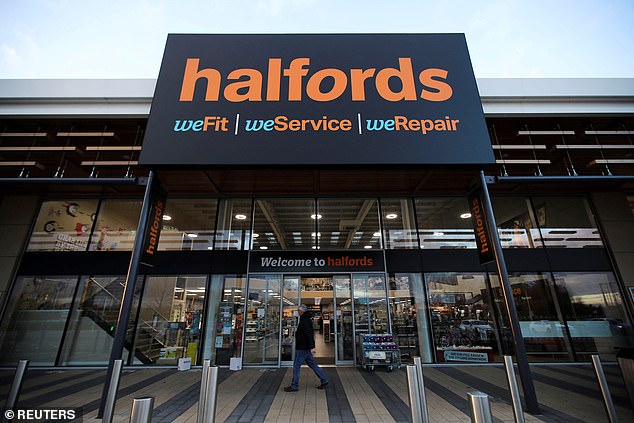 Halfords shares slammed into reverse after it warned profits would be hit by higher costs and lower spending on bikes by customers feeling the pinch.

The cycling and motoring retailer reported profits of £29million for the six months to the end of September – half what it made in the same period last year.

As such, it warned profits for the full year would be at the bottom end of its £65million to £75million range.

But while revenues at its autocentres – which specialise in car servicing, MOTs and repairs – jumped 70 per cent to £265.2million, the retail business saw a 7.1 per cent decline to £500.5million.

Within its retail arm, sales of motoring products from windscreen wipers to engine oil fell 2.4 per cent. But cycling revenues were down nearly 12 per cent as demand for bikes and bike parts eased.

With sales in the cycling division cooling following a boom during the pandemic, the group is now focusing on building its revenue stream from servicing bikes and cars.

Service-related sales account for 42.6 per cent of group revenues and are expected to rise to more than 50 per cent next year after its acquisition of tyre dealer Lodge Tyre.

The proposed tie-up between two of the country’s biggest newspaper publishers has been scrapped as The Scotsman’s owner decided against a bid for its larger rival Reach, which owns the Mirror and Express. 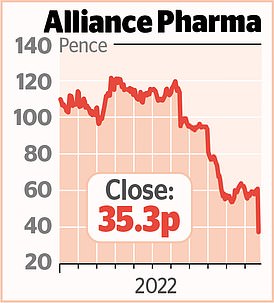 The boss of Alliance Pharma is to step down temporarily for personal reasons.

Peter Butterfield, who became chief executive in 2018, will be replaced by finance boss Andrew Franklin before returning in January.

The healthcare group, whose products range from lotions and mouthwash to tablets, suffered a further blow after several orders expected in the final three months of the year fell through.

National World – run by newspaper tycoon David Montgomery – said the ‘circumstances are not aligned’ having previously said it was exploring a potential bid for its larger rival three weeks ago.

The deal would have combined two major publishers of local and regional newspapers in the UK.

Reach, formerly known as the Mirror Group, owns more than 130 titles across the UK.

They include the Liverpool Echo, the Daily Record, the Manchester Evening News, the Star and OK! Magazine, as well as many more local publications.

National World, which owns the Yorkshire Post, said there would have been ‘considerable industrial and financial advantages to combining the newspaper portfolios of the two companies’, but concluded the circumstances were not right.

Boohoo was forced to respond to claims of poor working conditions at its site in Burnley following newspaper reports.

The fast fashion brand said making sure ‘people are safe and comfortable in their workplace is our highest priority’. Shares sank 1.1 per cent, or 0.43p, to 38.38p.

Britvic rose 2 per cent, or 15.5p, to 784.5p as it enjoyed rising sales and profits following warmer weather and the easing of Covid restrictions.

Johnson Matthey received a thumbs up from investors after the chemicals group revealed how it would make savings by streamlining the business.

Thread maker Coats saw sales rise by 6 per cent in the four months to October, beating the 5 per cent figure analysts expected.

Coats flagged foreign exchange headwinds of 5pc compared with 3 per cent to 4 per cent in the previous update. Shares slid 0.7 per cent, or 0.5p, to 68p.