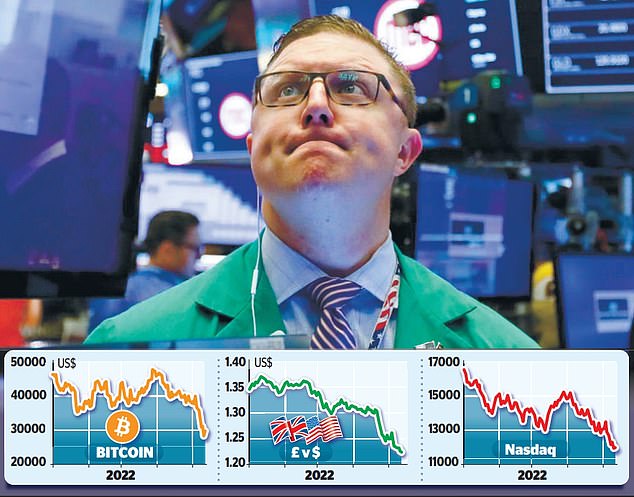 Pound tumbles to two-year low on fears of a UK recession: Panic in the markets as inflation stalks the global economy

The pound crashed to a two-year low and shares tumbled amid mounting fears sky-high inflation will tip Britain into recession.

As bleak figures showed the economy contracted in March – before a sharp rise in energy bills and taxes in April – sterling fell as low as $1.2166.

That was the lowest level since May 2020, during the depths of the first Covid lockdown.

Panic also tore through crypto-currency markets as soaring inflation, rising interest rates and the war in Ukraine cast a shadow over the global economy.

Victoria Scholar, head of investment at Interactive Investor, added: ‘March’s monthly data provides the first indication of economic contraction in the UK, raising concerns that a recession is looming.’

The Office for National Statistics said output fell 0.1 per cent in March. That brought growth for the first quarter of 2022 to just 0.8 per cent, missing expectations of 1 per cent and propped up by January’s performance.

Despite the slump, a senior Bank of England official warned that interest rates will have to rise further to bring inflation back under control.

The Bank has already raised rates to a 13-year high of 1per cent. But with inflation set to top 10 per cent – five times the 2 per cent target – deputy governor Dave Ramsden said: ‘I don’t think we’ve gone far enough yet.’

It is feared, however, that higher borrowing costs will further slow a fragile economy already reeling from an inflation shock.

An oil giant has overtaken Apple to become the world’s most valuable company.

State-backed Saudi Aramco has cashed in on soaring energy prices while tech stocks, including Apple, take a hit.

As the world’s biggest oil exporter, Aramco made £83.5billion last year – more than double the level it generated in 2020 – even before Russia’s invasion of Ukraine sent the cost of oil spiralling.

Aramco’s shares have risen 25 per cent this year valuing it £2trillion.

Mortgage holders and other borrowers already feeling the squeeze from rising prices will also see the cost of their debt jump.

Analysts warned of worse to come following a sharp rise in energy bills in April and Chancellor Rishi Sunak’s hike in National Insurance.

The Bank of England has been hiking rates since last December, in an effort to cool red-hot inflation.

In theory, higher rates should help keep a lid on prices by encouraging households to save rather than spend. But they also have the effect of dampening activity, threatening to throw the Covid recovery into reverse.

The Bank has been trying to toe a fine line, hoping to keep inflation under control without slowing the economy down too much.

But with inflation expected to hit 40-year highs, it has been spurred into more drastic action.

Charles Goodhart, a former member of the rate-setting Monetary Policy Committee (MPC), told Parliament’s Treasury committee this week that officials would probably have to lift rates at each meeting in the immediate future.

He admitted that this would be likely to push the economy into a recession, but that getting inflation under control was key.