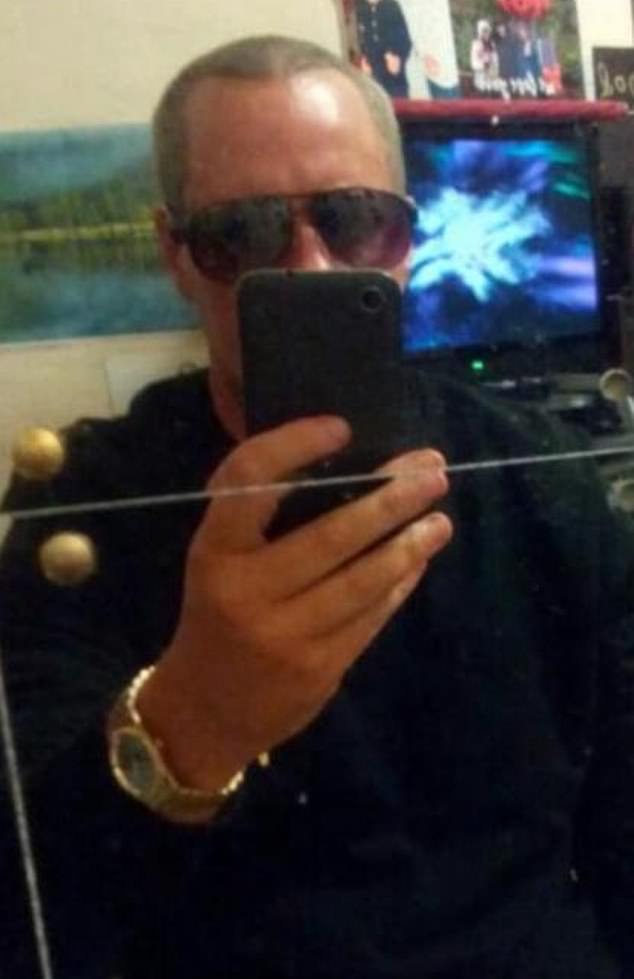 The smartphone used illegally by one of Stephen Lawrence’s killers in his prison cell has been found inside his body after he was X-rayed at Dartmoor prison.

Officials discovered the device after investigating the Daily Mail’s bombshell revelations that David Norris, 46, had used it to send messages and selfies to friends outside.

Specialist scanning equipment located the black smartphone in an intimate place after this newspaper tipped off the Ministry of Justice that Norris had been flouting strict prison rules.

Staff raided Norris’s cell on Tuesday evening while he was elsewhere. After failing to find the phone, they X-rayed him and the scanner revealed a ‘large rectangle object’ – later confirmed to be a smartphone.

Hours later, the phone was seized and is set to be examined by the Prison Service’s digital investigations unit to establish who the foul-mouthed racist had secretly been in contact with from his cell on E Wing at Dartmoor, a category C prison.

David Norris, 46, posted an extraordinary picture of himself wearing Top Gun-style Aviator sunglasses with his TV and Xbox games console in the background in his cell at Dartmoor Prison in Devon

Investigators want to establish whether Norris was in communication with active criminals outside prison, including those suspected of being involved in Stephen’s murder in 1993.

They will also want to find out who supplied the phone, and how it was funded. There are fears that a corrupt member of prison staff may have been paid to provide the device.

Sources have confirmed that the discovery of the mobile, which according to Whitehall sources was an HTC smartphone, will almost certainly result in the racist killer being denied parole when he is eligible to apply for release.

They said experience suggested the offence will ‘decrease his likelihood of being released from prison’.

It is also likely to end Norris’s hopes of being transferred to a cushy category D open prison in the coming years.

Last night Norris was being held in a segregation unit – effectively in solitary confinement – as inquiries continue.

The Mail has learned that he is set to be stripped of several privileges and could be transferred to a tougher, higher-security prison in the coming days.

Asked to comment on the extraordinary developments, which followed a major Mail investigation, a Prison Service spokesman said: ‘A phone has been recovered and we continue to investigate.’ Yesterday this paper revealed how Norris was facing a criminal probe after sending sickening selfies from his cell. 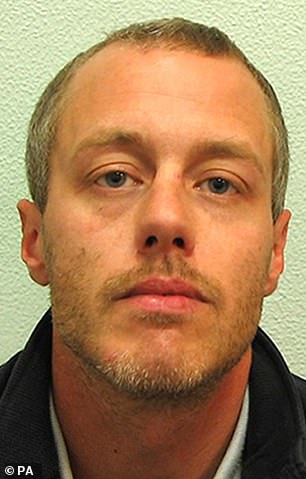 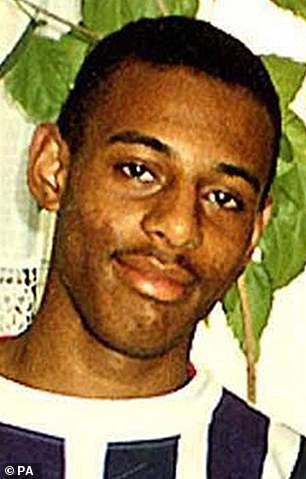 Snarling brute Norris (left), 46, was one of two men convicted of 18-year-old Stephen’s (right) murder at a bus stop in Eltham, south-east London, in April 1993 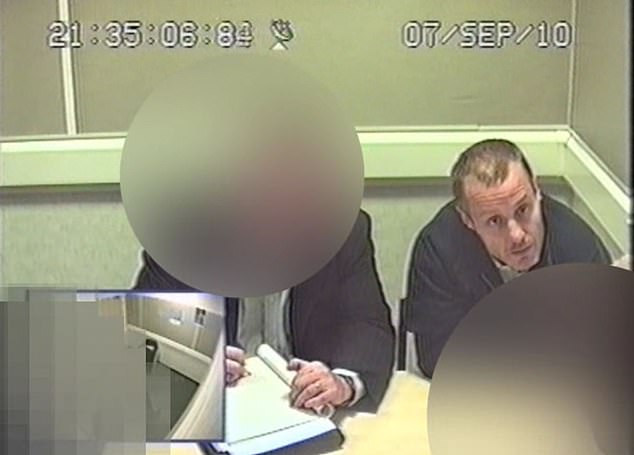 Police video of their interview with David Norris on September 7, 2010, following the murder of Stephen Lawrence 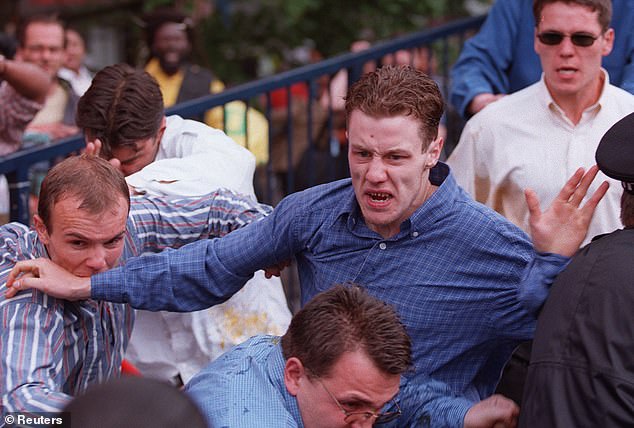 Norris, centre, runs for cover as he and some of the others are pelted with eggs after leaving a Public Inquiry into police handling of the case in London on June 30, 1998

The killer – one of two men convicted of murdering 18-year-old Stephen in Eltham, south London – was using a smartphone to call and text friends, log on to Facebook and watch YouTube videos.

In a foul-mouthed WhatsApp rant this month, the unrepentant murderer launched a vile attack on former justice secretary Dominic Raab, who blocked his bid to move to an open prison in May.

He brazenly posted a picture of himself behind bars wearing Top Gun-style aviator sunglasses and with his TV and Xbox games console in the background.

A whistleblower said Norris bragged to fellow inmates that he was the gang member who stabbed Stephen to death. If true, this is a significant revelation because police are still uncertain who wielded the knife. 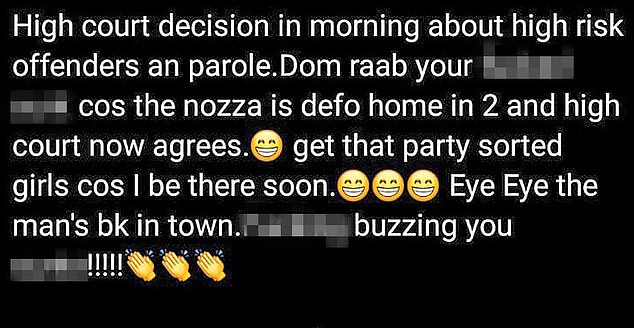 In a foul-mouthed rant on messaging service WhatsApp, the unrepentant murderer – nicknamed ‘Nozza’ by fellow inmates – launched a vile attack on former justice secretary Dominic Raab, who blocked his bid to move to an open prison earlier this year 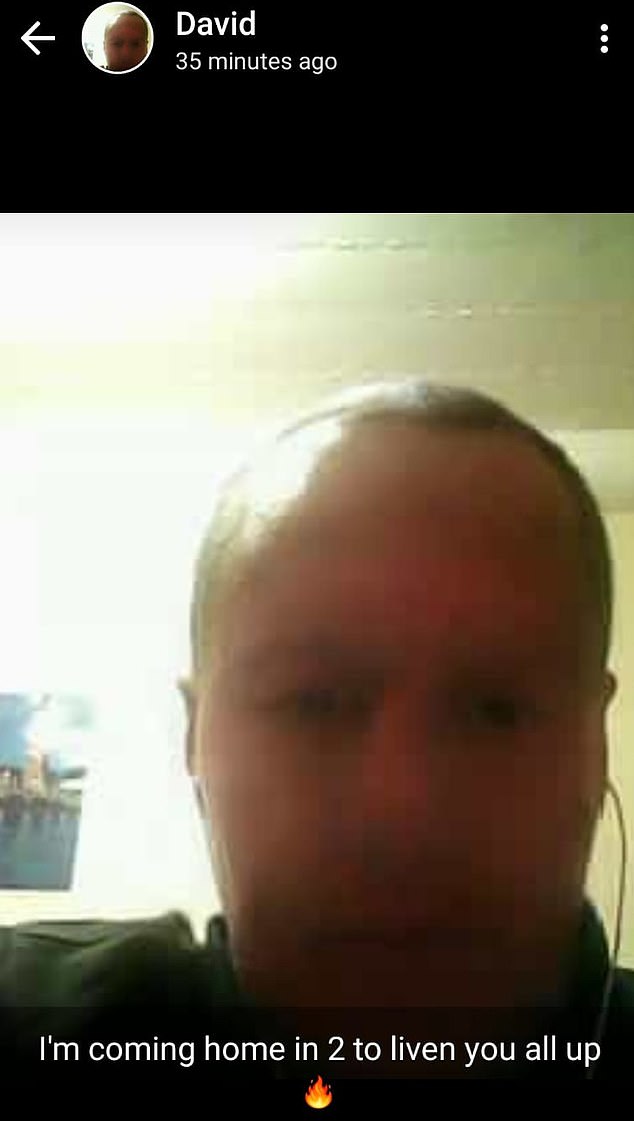 Five men were initially arrested over the racist murder of the A-level student.

After an acclaimed campaign for justice by the Mail, Norris and Gary Dobson, 47, were jailed for life for murder in 2012.

Former Metropolitan Police detective chief inspector Clive Driscoll, who led the investigation which resulted in the pair being convicted, praised the Mail’s investigation, including the revelation about the alleged cell confession by Norris.

In a statement, he said: ‘I hope all opportunities are explored after these articles. It could be useful to review what is already known against the comments if substantiated. I thank the Daily Mail for its continuous work in highlighting some of the weaknesses in our system. We can only move forward if mistakes or loopholes are exposed and then professionally dealt with.’ 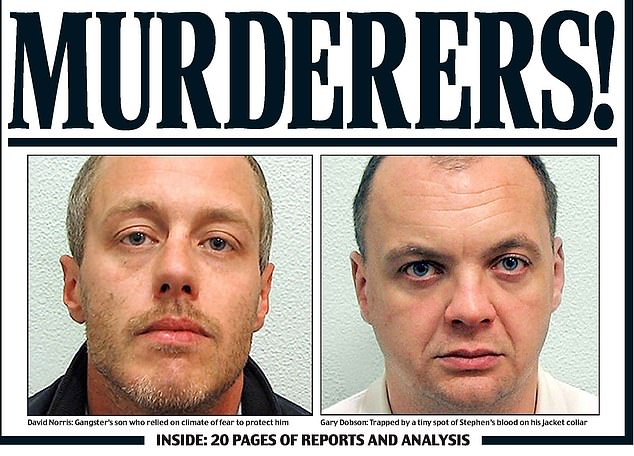 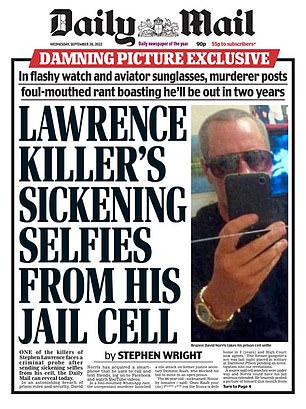 Opposition parties backed the probe into how Norris came to acquire the phone and called for the Government to crack down on contraband to avoid similar situations in the future. Steve Reed, Labour’s shadow justice secretary, said: ‘More prisoners are abusing drugs and getting access to mobile phones than ever before.

‘It’s time the Government listened to victims and cracked down hard on the flood of illegal items pouring into jails.’

Liberal Democrats home affairs spokesman Alistair Carmichel added: ‘This revelation is shocking and it’s clear what we are seeing here is a wider issue in our prisons. Inmates should not be allowed to get a hold of banned phones. We need to see an urgent inquiry into the use of contraband phones in our prison system.’ In May, it emerged that Norris had been denied a move to an open prison. Mr Raab blocked the request amid fears he still posed a risk to the public.

A Prison Service spokesman said: ‘New technology poses challenges to our prisons, yet it is also a crucial part of the solution.

‘Over the past two years, we have invested £125 million in transforming the way prisons prevent drugs and mobile phones from getting in, and expanding their capability to detect and seize contraband from the prison wings. From additional phone detection and blocking technology to the rollout of 75 high-resolution X-ray body scanners covering all male prisons in the last two years, our prisons are more secure than ever before.

‘We are also investing in a new digital forensics unit which will work alongside our digital investigation team to interrogate devices smuggled into jails to produce improved evidence more likely to bring a successful prosecution in court.

‘This in turn will support the work of the corruption crime and policing investigation unit which works with police to tackle the organised criminal gangs and small minority of corrupt officers responsible. 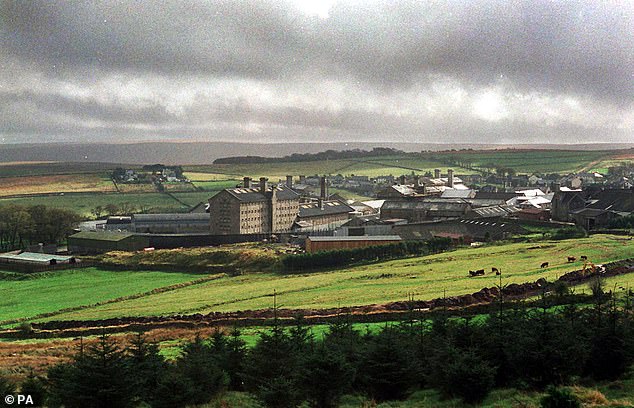 Investigators want to establish whether Norris was in communication with active criminals outside prison, including those suspected of being involved in Stephen’s murder in 1993

‘And statistics show this is working – in the past two years, more 20,000 attempts to smuggle contraband have been intercepted by scanners and the number of incidents where drugs were found in prisons fell by 13 per cent in the year to April 2022, with intelligence suggesting more drugs were found before they could get on to the prison wings. ‘

The judge in the Stephen Lawrence murder trial suggested he would have doubled Dobson and Norris’s minimum sentence of had the law allowed.

Mr Justice Treacy told the killer pair in 2012 they would each have faced at least 30 years if they had been adults committing the same crime on a ‘blameless and helpless’ victim in modern times.

In the event, Dobson was given at least 15 years and two months behind bars while Norris was told he must serve at least 14 years and three months before being considered for release.

Neither man, said the judge, had shown the ‘slightest regret or remorse’. He added: ‘The high level of public interest in this case is at least in part a reflection of the abhorrence felt by right-thinking people at the nature of this crime.’