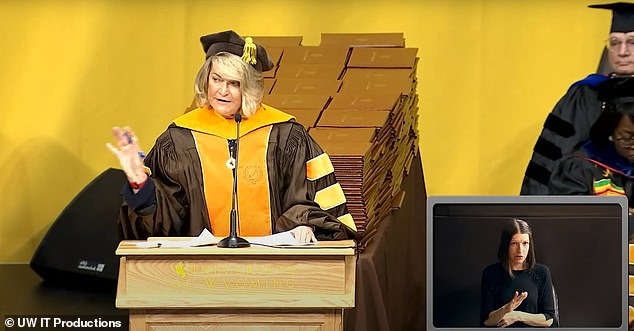 Republican Sen. Cynthia Lummis apologized on Monday after being jeered and booed by students for using a University of Wyoming graduation speech to declare that it was a ‘fundamental scientific truth’ that there were only two sexes.

Dozens of people took to social media to accuse her of delivering a political tirade rather than the sort of uplifting comments expected.

‘My reference to the existence of two sexes was intended to highlight the times in which we find ourselves, times in which the metric of biological sex is under debate with potential implications for the shared Wyoming value of equality,’ her statement read.

‘I share the fundamental belief that women and men are equal, but also acknowledge that there are biological differences and circumstances in which these differences need to be recognized.

‘That being said, it was never my intention to make anyone feel unwelcomed or disrespected, and for that I apologize.’

During her address on Sunday, Lummis, 67, said fundamental freedoms were under attack in the United States.

Republican Sen. Cynthia Lummis angered her audience at the University of Wyoming on Sunday by saying: ‘Even fundamental scientific truths, such as the existence of two sexes – male and female – are subject to challenge these days’ 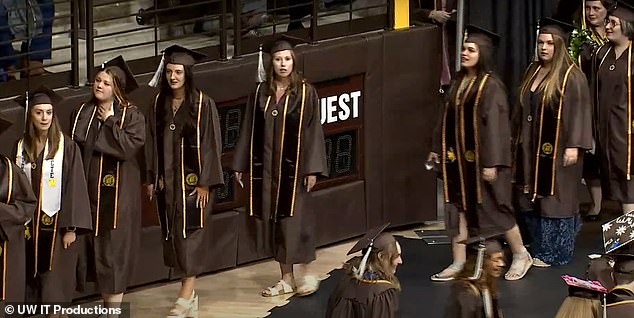 Lummis was jeered and heckled after she made the remarks. On Monday she issued an apology saying she had not meant to make anyone feel ‘unwelcomed or disrespected’

‘There are those in government who believe, not that the Creator endowed us within alienable rights as the founders of our nation acknowledged in the Declaration of Independence,’ she said, ‘but that government created those rights, and that government should redefine those rights, including our rights to freedom of speech, religion, property assembly and to keep and bear arms.

‘Even fundamental scientific truths, such as the existence of two sexes – male and female – are subject to challenge these days…’

At that point she was halted by a chorus of heckles, shouts and jeers from her audience.

‘You know, I …’ she said, before halting again, and trying to dig herself out of a hole.

‘I challenge those of you … I’m not making a comment on the fact that there are people who transition between sexes.’

Wyoming is a predominantly Republican state and Lummis is its first female senator.

She is a former student of the University of Wyoming, with degrees in animal science, biology and law.

‘I was at the University of Wyoming graduation today for my awesome niece,’ wrote user @remdold.

‘One of the speakers was WY senator Cynthia Lummis who thought that was a good time for a political agenda speech instead of an inspirational speech for the graduates. Self serving politician!’ 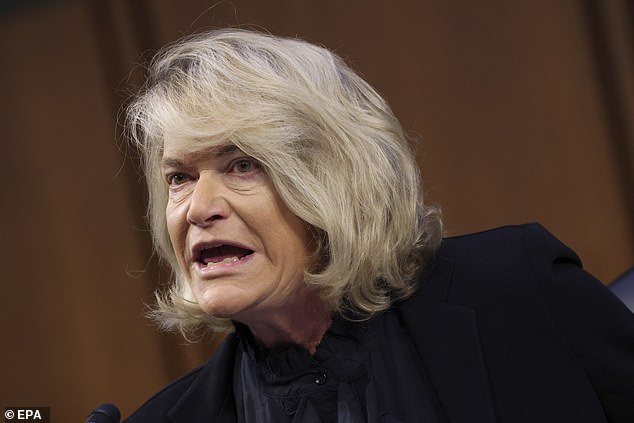 Lummis is Wyoming’s first female senator and hold three degrees from the University of Wyoming in animal science, biology and law

Others made reference to the murder of Matthew Stewart, a gay student who was beaten and tortured in 1998.

After the event, the university’s president put out a statement about the remarks without naming the Wyoming senator.

‘One of our speakers made remarks regarding biological sex that many on campus take issue with,’ said Ed Seidel.

‘While we respect the right of all to express their views, from students to elected officials, we unequivocally state that UW is an institution that supports and celebrates its diverse communities that collectively make us the wonderful place that we are.’

That further enflamed some critics.

But the university’s Inclusion Council, which includes the dean of students and other staff offered a stronger statement describing the words as ‘harmful.’

‘We are committed to creating a campus where ALL members can safely live as their authentic selves as they navigate their educational experience and contribute to campus and community,’ it said in a statement, according to the Casper Star-Tribune.

‘All sexes and genders are welcome at the University of Wyoming, and we deeply regret the harmful impact these words at our graduation ceremony may have had on those graduating as well as their families and friends.’