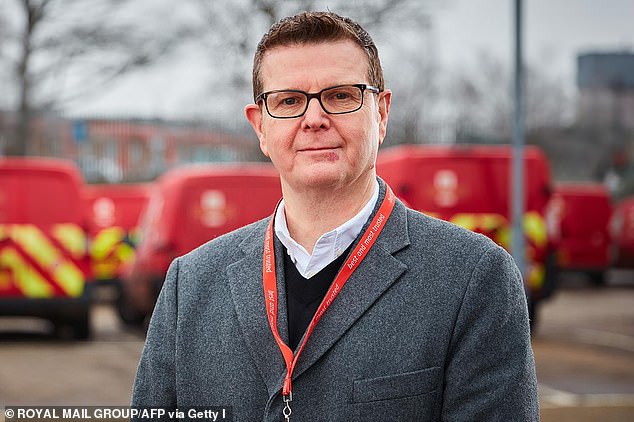 The future of Royal Mail’s boss has been thrown into doubt after he was recalled by MPs to face a further grilling.

Simon Thompson will be hauled in front of the Commons business select committee for a second time after its chairman Darren Jones claimed in a letter that answers he gave at a previous session might not have been ‘wholly accurate’.

Analysts warned the embattled chief executive faced ‘serious questions about his leadership’ if he was found to have misled Parliament.

Questions: Royal Mail boss Simon Thompson (pictured) was told answers he gave at a previous session before the Commons business select committee might not have been wholly accurate

The decision followed a bruising appearance at the committee last week when Jones said Thompson’s responses raised ‘grave concerns’ about the business and reminded him it would ‘not be appreciated’ if his responses were proven untruthful.

Royal Mail chairman Keith Williams, who was not at the previous hearing, has also been called in.

‘This is yet another negative headline facing Royal Mail which is already struggling under the weight of industrial action,’ said Victoria Scholar, head of investment at investment platform Interactive Investor.

‘There will be serious questions about [Thompson’s] leadership if it transpires that his answers in Parliament last week were inaccurate.

‘Drastic change is needed at Royal Mail to re-invigorate its finances whether that be a spin-off, new leadership or the abolition of its Saturday delivery services.’

A Royal Mail spokesman said the firm welcomed the opportunity to ‘expand on any points on which the committee would like clarification’ but claimed it was seeing ‘an increasingly false narrative’ about an ongoing dispute over pay that it said was ‘designed to create fear and uncertainty amongst our employees’.

The recall comes amid growing signs Thompson’s authority is starting to crumble as Royal Mail remains consumed by a bitter and long-running industrial dispute that has paralysed the business and left it facing estimated losses of over £2million per day.

Matters were made worse earlier this month after a cyber-attack knocked out its overseas delivery operations.

On Monday, representatives of around 20 major shareholders met with trade union bosses to try and find a solution to the disruption which has caused shares in Royal Mail’s parent company International Distributions Services (IDS) to sink nearly 50 per cent over the last 12 months.

News of Thompson’s recall was quickly seized upon by the Communication Workers Union (CWU), which represents around 115,000 postal workers, who said they ‘wholeheartedly’ welcomed the decision.

Thompson has come under attack from his predecessor Rico Back, who earlier this month blasted the company’s management for its ‘confrontational’ approach to the strikes.

There are also lingering concerns about the motives of Daniel Kretinsky, a Czech billionaire who owns 23 per cent of the business through his vehicle Vesa Equity.

Kretinsky is thought to still be supporting Thompson, with rumours he could be advising him to help resolve the problems facing the business.