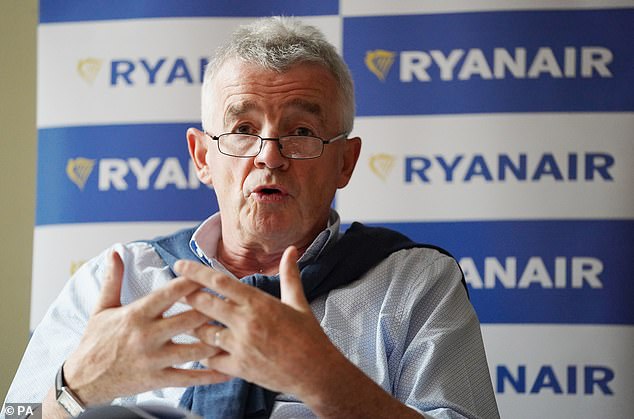 Ryanair boss Michael O’Leary has claimed he would welcome an economic downturn because it would boost his business.

The extraordinary admission comes despite the airline giant posting a £300million loss for the 12 months to the end of March.

O’Leary said Ryanair is recession-proof ‘because people don’t stop flying’ during a slump and his airline is affordable.

His claims come as recession fears grow in the UK, and with soaring inflation set to spark higher air fares this summer.

‘I would look forward with some optimism to an economic downturn because I think it would be better for Ryanair’s business,’ he told Bloomberg.

‘In every past recession, we have grown stronger and faster because people don’t stop flying in a recession, they get more price-sensitive.

‘Ikea, Lidl, Ryanair will be the beneficiaries of a downturn.’

He boasted that Ryanair continues to take ‘huge swathes of market share from competitors’.

Ryanair remained unprofitable despite passenger numbers rising from 27.5million to 97.1million in 2022.

The Irish carrier’s capacity will grow to roughly 115 per cent of pre-pandemic levels this summer, but it expects ‘to fill these flights with lower fares and at higher fuel costs’.

Next year’s forecasts predict passenger traffic will hit a record 165million, and O’Leary is targeting ‘reasonable profitability’ in 2023 thanks to ‘pent-up demand’.

But O’Leary remained cautious and said its recovery ‘remains fragile’ due to war in Ukraine and the prospect of a new Covid variant. He said it plans to slash its net debt from £1.23billion to zero over the next two years.