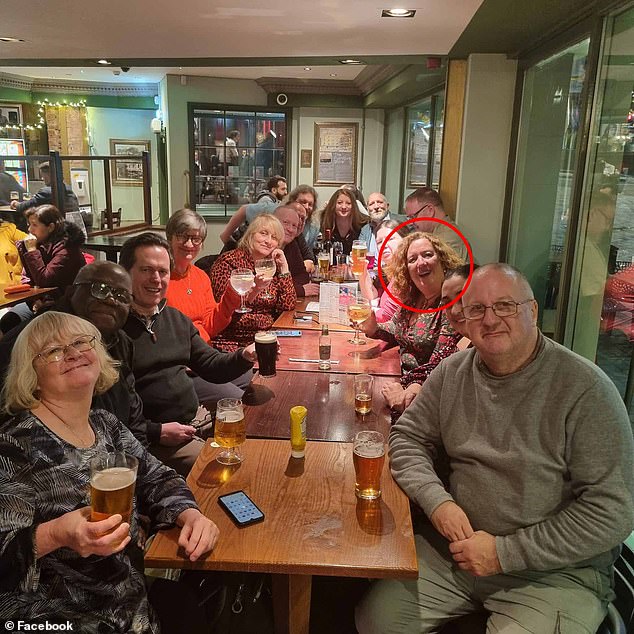 A union boss and her ‘comrades’ were seen enjoying a ‘celebratory’ meal out together hours after announcing Border Force strikes that could ruin Christmas getaways for millions of Britons.

Fran Heathcote, the elected national president for the Public and Commercial Services (PCS) union which represents civil servants, was seen raising her glass at a pub in Clapham, south London , just hours after the union announced 1,000 Border Force staff would stage a walkout.

Meanwhile, a landlord has banned railway strikers from holding a Christmas bash at his pub due to the impact walkouts have had on his business.

Andy Shaw, who runs the Portwall Tavern in Redcliffe, Bristol, denied a booking by the Bristol Rail Workers’ Social and Welfare Fund to hold their Christmas do there on Saturday. 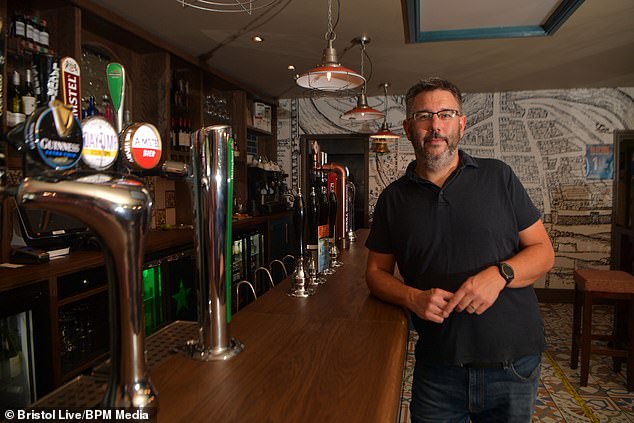 Andy Shaw, who runs the Portwall Tavern in Redcliffe, Bristol, denied a booking by the Bristol Rail Workers’ Social and Welfare Fund to hold their Christmas do there on Saturday

The publican said it would have been ‘hypocritical’ to accept their custom ‘given I’ve lost a lot of money because of this strike’, adding it was ‘affecting my staff’ and ‘trade’ due to the pub’s proximity to the Bristol Meads railway station.

Britons are bracing for a strike every day before Christmas as staff from different industries seek better pay and working conditions.

Rail unions have already said they will wreak havoc on the train network over Christmas, while postal staff will join picket lines instead of delivering last-minute presents and cards.

NHS nurses and paramedics are also due to walk out for several days, with fears that soldiers will have to be drafted in to cover gaps in care.

And on Wednesday, the PCS announced passport officials would strike on eight days over Christmas at six airports including Heathrow and Gatwick.

Hours later, PCS union officials posted a picture on Facebook of themselves raising a glass at a pub in Clapham, south London, with the caption: : ‘Good comrades, lovely meal and lots to celebrate’.

The do at The London and South Western pub at Clapham Junction on December 7 reportedly cost hundreds of pounds, according to the Sun.

That same day, Ms Heathcote appeared on TalkTV to say that is is ‘very true that what we are going to be seeing in weeks and months ahead is mass coordinated action’ between the PCS and other unions who have disputes with the government. 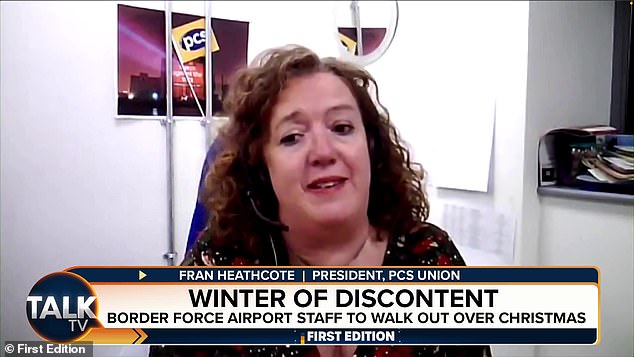 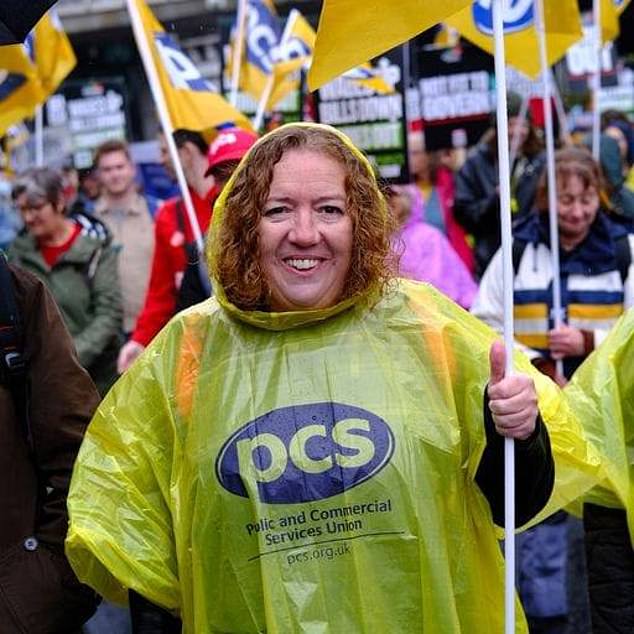 She said: ‘We are talking to other unions, we are coordinating with other unions and it would make sense wouldn’t it, if our dispute and other disputes, that we would see to coordinate that action to have the maximum impact’.

Yesterday, Home Secretary Suella Braverman urged Britons ‘think carefully’ before attempting to leave the country this Christmas, ahead of ‘undeniable, serious disruption’ due to border staff going on strike.

She cautioned that despite plans for the Army to take some of the strain travel will inevitably be ‘impacted’, amid mass walkouts on the railways over the festive period too.

The wave of planned strikes over conditions and pay this month have extended from nurses, paramedics and rail workers to Border Force officials.

Staff at Gatwick, Heathrow, Manchester, Birmingham and Cardiff airports will strike for eight days from December 23 to New Year’s Eve.

Ms Braverman told broadcasters: ‘It’s very regrettable that they have made this decision to potentially strike over critical times in the run up and following Christmas and New Year.

‘If they go ahead with those strikes there will be undeniable, serious disruption caused to many thousands of people who have holiday plans.’

However, one landlord decided to put his foot down over striking railway workers by turning away a Christmas party booking they made at his pub.

The row began back in August when the Bristol Rail Workers’ Social and Welfare Fund asked to book out the entire pub for their party on December 10.

The committee has booked out the pub for the past five years for its Christmas bash, but this time Mr Shaw said he did not feel comfortable accepting the booking. 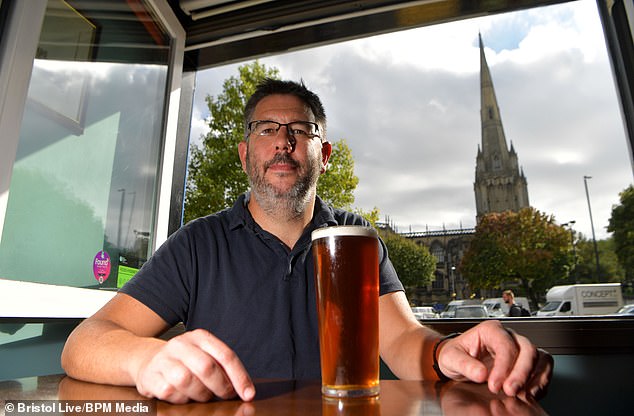 Andy Shaw, of the Portwall Tavern in Bristol, decided to put his foot down over striking railway workers by turning away a Christmas party booking they made at his pub

Mr Shaw asked the rail workers if they had been involved in the ongoing strikes involving GWR staff on the railways around Bristol, and when they confirmed they had, he said he couldn’t accept their booking.

‘I wrote back a very polite email, saying that while I wished them well in their action and hoped it would be sorted soon, I couldn’t accept the booking,’ he told Bristol Live.

He continued: ‘It would be hypocritical of me to do so, given I’ve lost a lot of money because of this strike.

In response, the Bristol Trades Union Council passed a motion at the end of November calling on union members from across the city not to visit the Portwall Tavern because of the issue over the booking, calling it an ‘anti-worker establishment’. 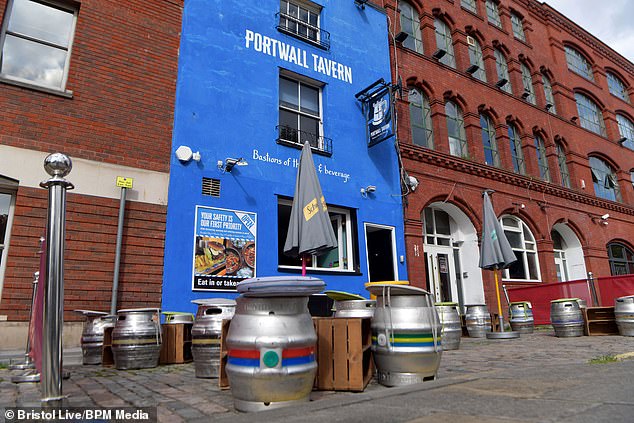 The rail workers social fund committee decided to take their business elsewhere, but rail workers union ASLEF were not happy that the pub had denied their custom because of the rail strike.

ASLEF submitted a motion to the Bristol Trades Council to call for trade unionists to boycott the pub.

The motion, which was passed by the Bristol TUC at the end of November, read: ‘ASLEF calls on Bristol Trades Council to call for trade unionists to boycott the Portwall Tavern, informing affiliated unions that this is an anti-worker establishment and that trade unionists should avoid drinking here in both personal and professional capacities.

‘ASLEF calls on Bristol Trades Council to encourage trade unionists to seek out independent, trade union-friendly pubs in Bristol, of which there are a significant number.’

The motion added: ‘We endeavour to support the establishments that share the aims and ideals of the trade union movement.’

After hearing about the boycott call, Mr Shaw called their response ‘bullying behaviour’.

The PCS union have been contacted for a comment.