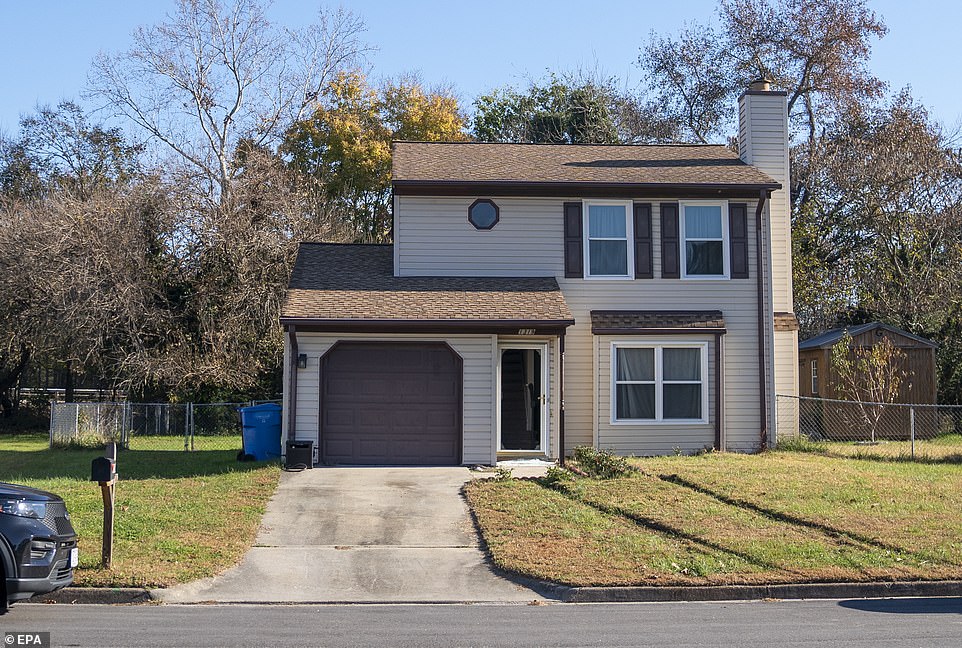 The Walmart gunman who opened fire in the break room of the Chesapeake store where he worked last night, killing six people before committing suicide, ‘always had a problem with staff’ and had worked at the store for 12 years.

The gunman was identified today as Andre Bing, a 31-year-old team leader, who opened fire in the breakroom of the Walmart in Sam’s Circuit, Chesapeake, at 10.12pm last night, where 14 employees had gathered for a pre-shift meeting.

By 10.16pm, when the first cops entered the store, the gunman had killed himself and two others.

A third victim was dead at the front of the store, near the entrance.

Three others who were taken to the hospital died of their injuries. Four others remain in the hospital today.  Among those killed is 22-year-old Tyneka Johnson, who was named by her family on Wednesday.

Andre had no social media accounts, and police are yet to release a photo of him. He does not appear to have had a criminal record.

A Walmart spokesman told DailyMail.com: ‘The alleged shooter has been identified as Andre Bing. We can confirm that he was a Walmart associate. Andre’s position with the company was overnight team lead and he’s been employed with us since 2010.’

The shooter’s home in Chesapeake. It was raided on Wednesday morning as cops continued to investigate his motive 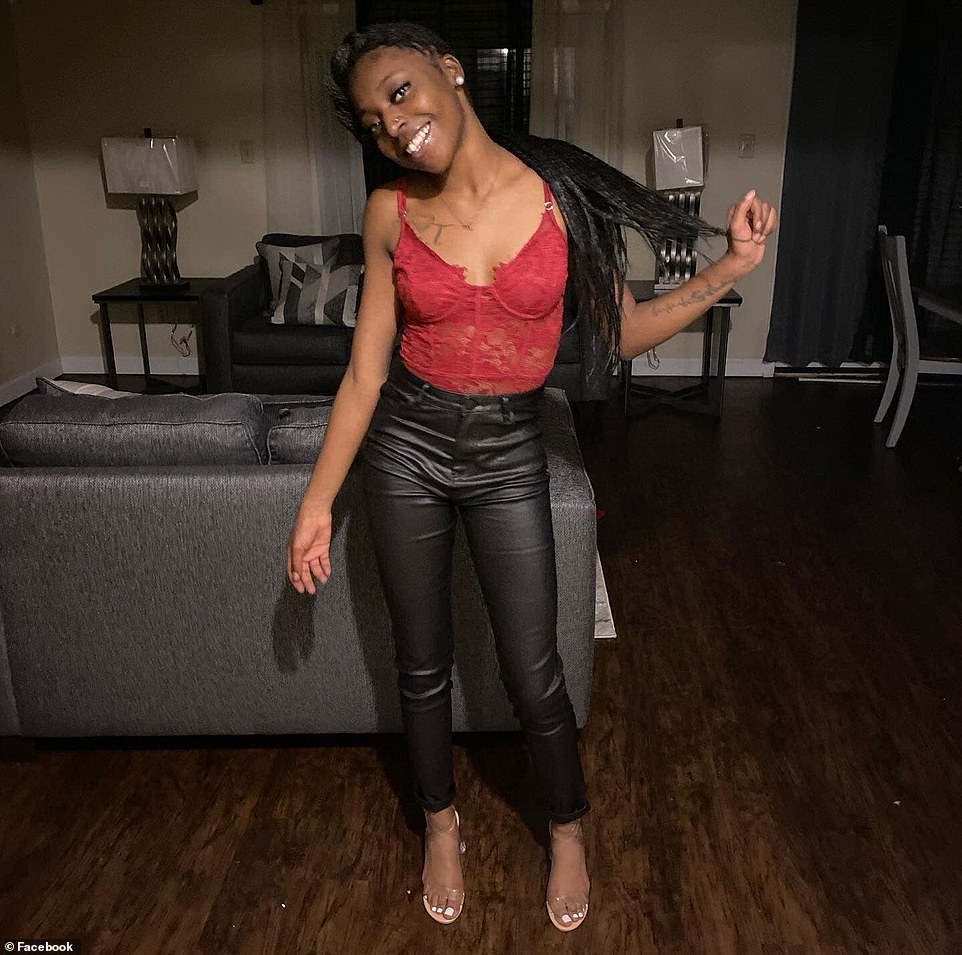 Tyneka Johnson, 22, is among the six people shot dead by a Walmart gunman in Chesapeake last night At 10.10pm last night, the shooter opened fire in a break room of the store. It’s unclear if the rampage was contained to the break room or if he ventured into the store 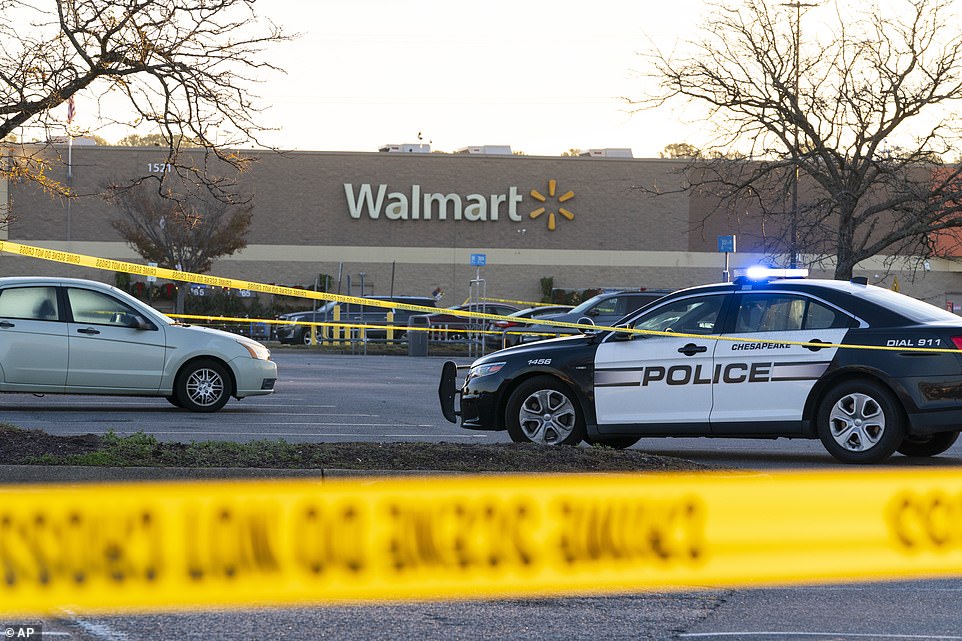 Law enforcement work the scene of a mass shooting at a Walmart, Wednesday, Nov. 23, 2022, in Chesapeake, Va. A store employee shot six people dead then killed himself last night in a pre-Thanksgiving rampage 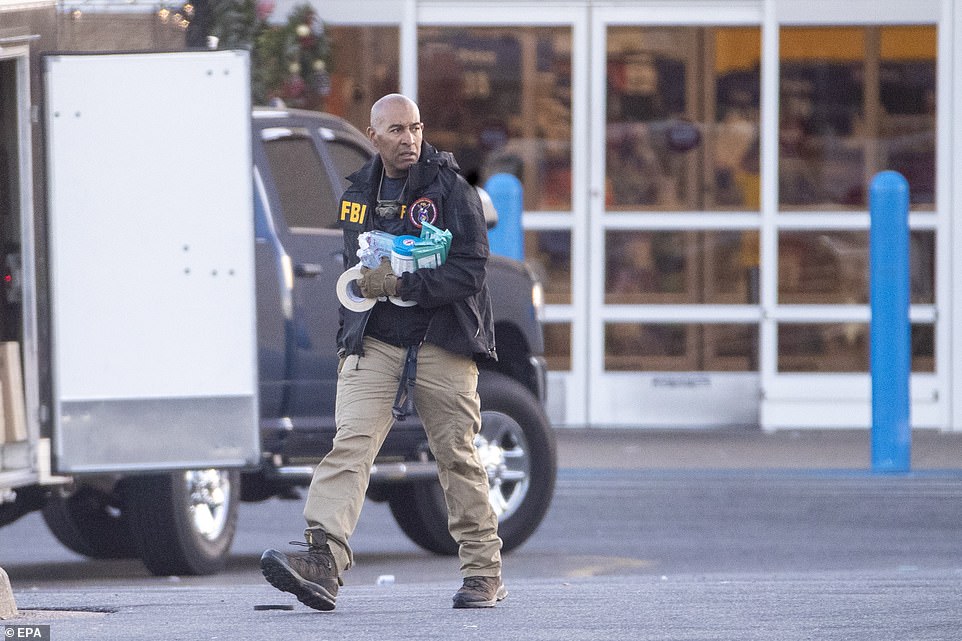 A member of the FBI works at the scene of a mass shooting at the Walmart Supercenter in Chesapeake, Virginia, USA, 23 November 2022 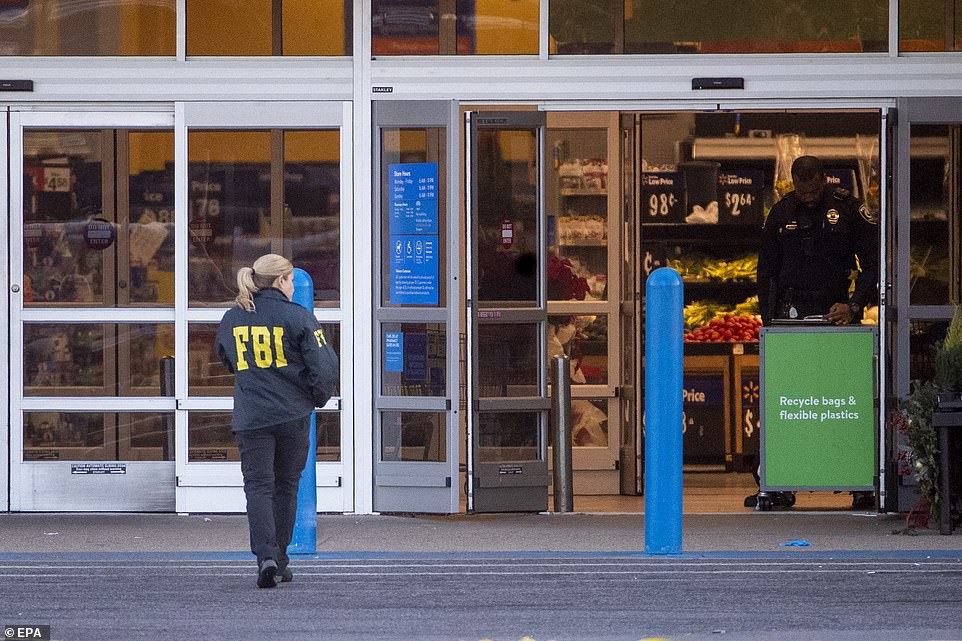 A member of the FBI works at the scene of a mass shooting at the Walmart Supercenter in Chesapeake, Virginia, USA, 23 November 2022

Walmart CEO Doug McMillon said in a LinkedIn statement of his own: ‘The devastating news of last night’s shooting at our Chesapeake, VA store at the hands of one of our associates has hit our Walmart family hard. My heart hurts for our associates and the Chesapeake community who have lost or injured loved ones. We are here for them today and in the challenging days ahead they will have our support.

‘We appreciate all of our associates, first responders, and local officials who are already on site helping offer support as we work together to navigate this tragedy.’

Survivors on Wednesday shared harrowing details of how the gunman was known to be problematic among staff.

Briana Tyler, who had worked at the store for two months, told Good Morning America that he was the one to ‘look out for’.

He wasn’t aiming at anybody specifically. He just literally started shooting throughout the entire break room

‘There was always something going on with him just having an issue with someone but I never expected it would get to this level. He was the manager that everybody had something to say about.’ Witnesses also described seeing some bodies being carried out in shopping carts.

Jeromy Basham, who had been shopping, told The New York Times he saw at least one body being carried out in a cart. Two of the victims died in the hospital.

‘As soon as my team lead said, ‘”all right, we have a light night tonight,” I looked up and my manager just opened the door and he just opened fire.’

‘He wasn’t aiming at anybody specifically. He just literally started shooting throughout the entire break room and I watched multiple people just drop down to the floor, whether they were trying to duck for cover or they were hit.

Others tell a different story of a targeted, planned attack in which the gunman deliberately killed other managers.

Employee Jessie Wilczewski said she was hiding under a table when the gunman looked ‘right at her’ and told her to go home.

‘It didn’t even look real until you could feel the … ‘pow-pow-pow,’ you can feel it.

‘I couldn’t hear it at first because I guess it was so loud, I could feel it.’

One witness who survived the shooting told local Virginia outlet WAVY that the shooter had ‘issues’ with other managers in the store, which led her to believe the attack was ‘planned’. 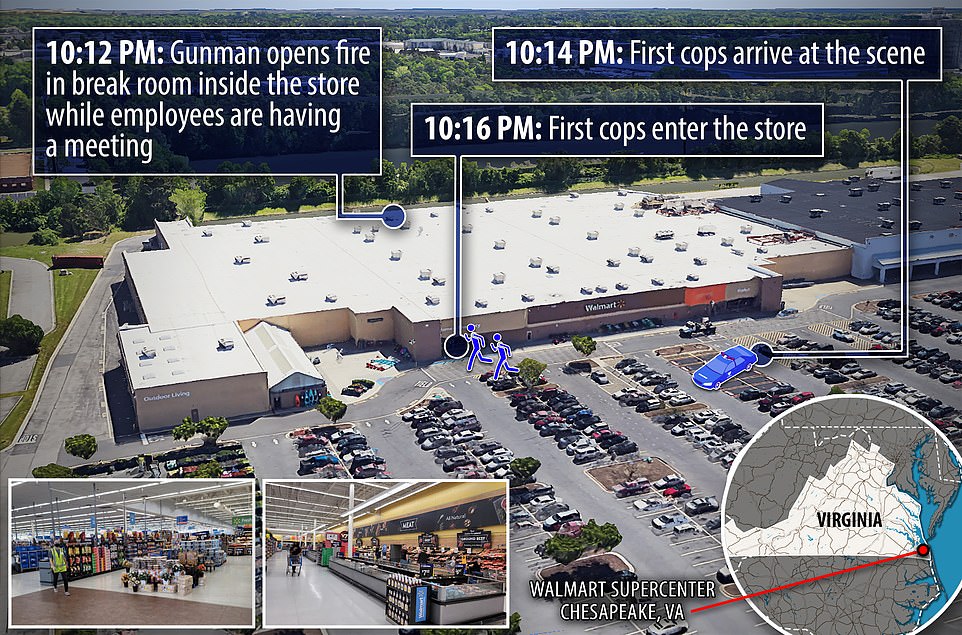 The gunman opened fire in the break room which is in the back of the store at around 10.12pm. The first 911 calls came in at 10.12pm and cops were at the scene at 10.14pm. They entered the store at 10.16pm, by which time the gunman had killed himself 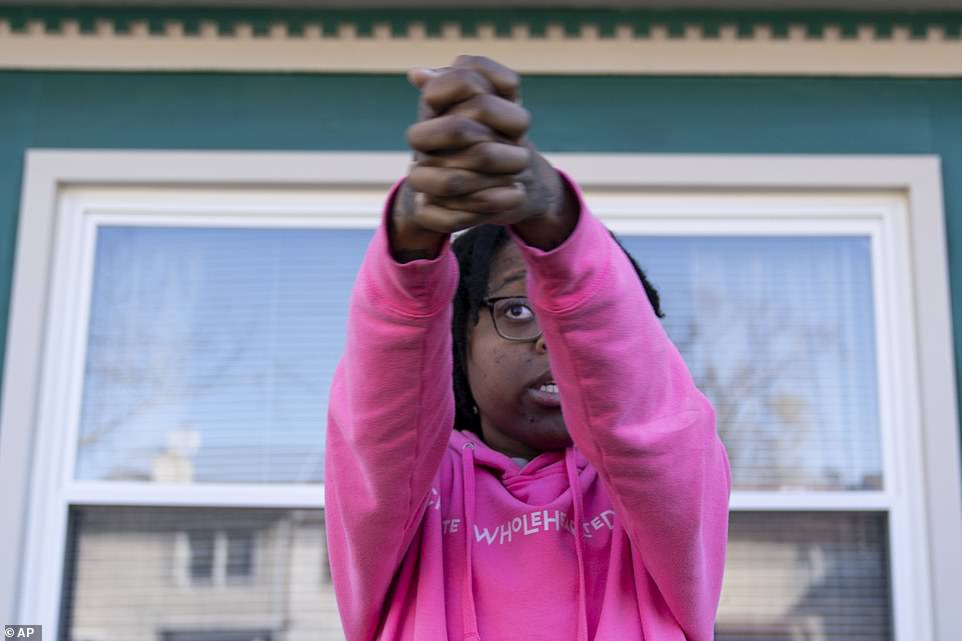 Briana Tyler, who survived the shooting, describes how the gunman opened fire within minutes of the night team turning up for their shift 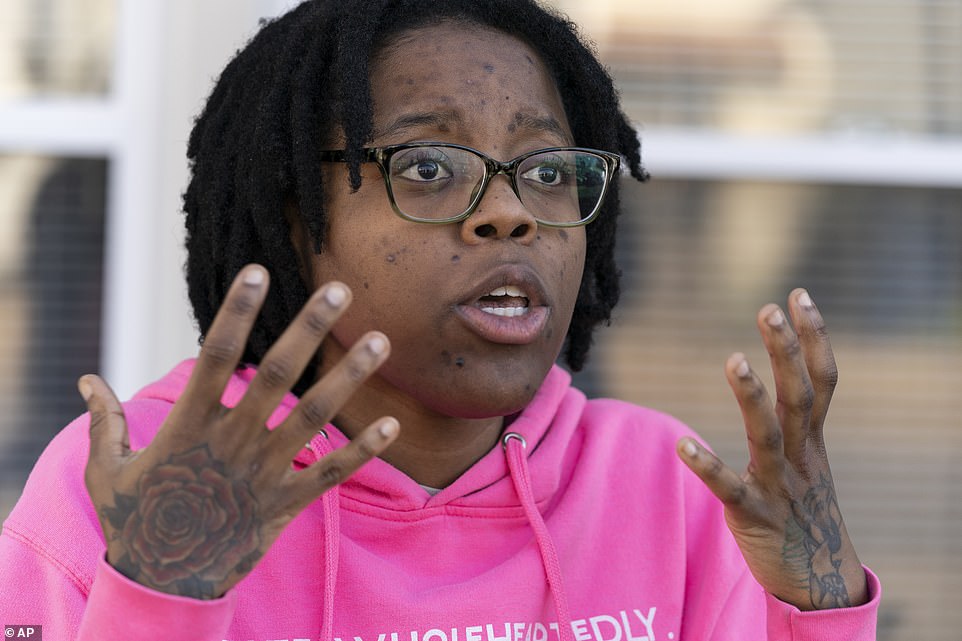 Tyler said she narrowly avoided being shot, and that the gunman’s bullet missed her head by an ‘inch’ 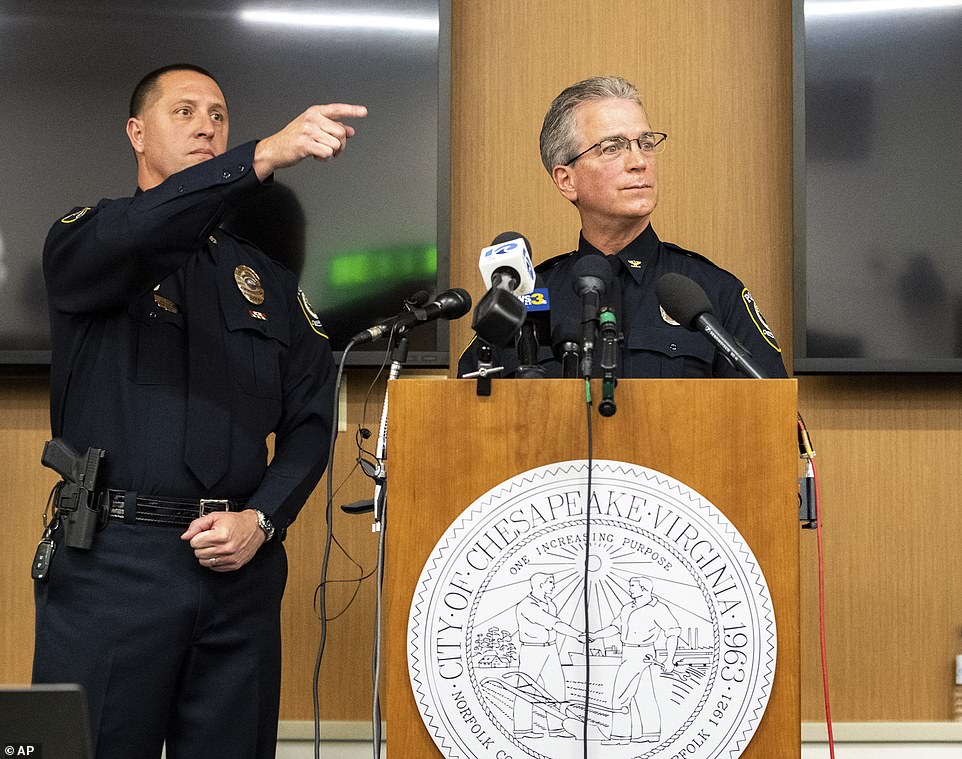 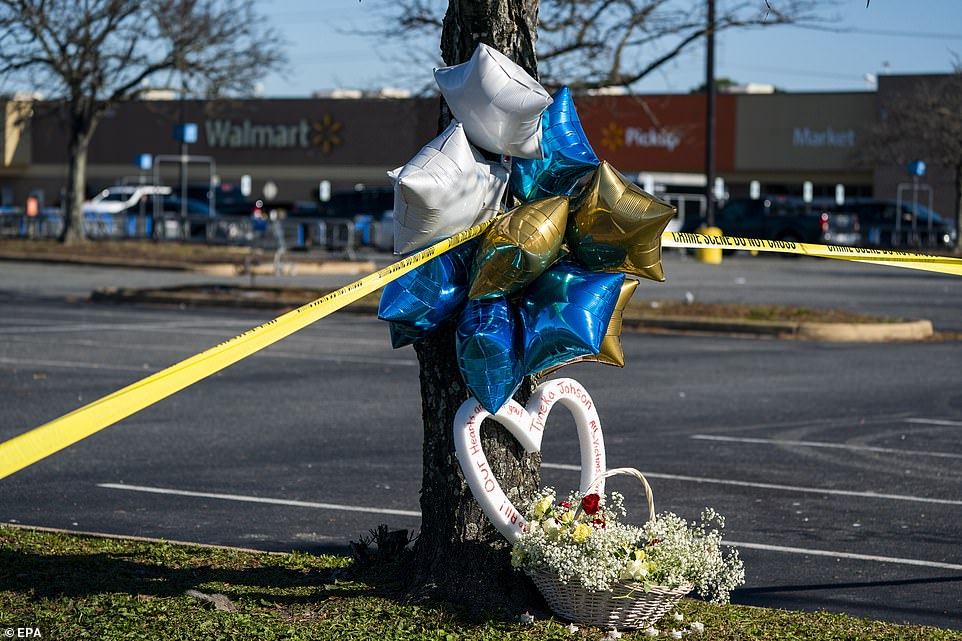 A makeshift memorial in the parking lot of the Walmart Supercenter where a mass shooting took place in Chesapeake, Virginia, USA, 23 November 2022

President Biden issued a statement on Wednesday morning, condemning the shooting and repeating his call for stricter gun laws. He has repeatedly called for a ban on assault rifles.

On Wednesday morning, police raided the shooter’s three-bedroom home in Chesapeake, which is around three miles from the store.

10.16pm: Cops enter the store and find the gunman dead

‘Tomorrow is Thanksgiving, one of our most cherished holidays that brings us together as Americans and as families, when we hug our loved ones and count our blessings.

‘But because of yet another horrific and senseless act of violence, there are now even more tables across the country that will have empty seats this Thanksgiving.

‘There are now more families who know the worst kind of loss and pain imaginable. Jill and I grieve for those families, for the Chesapeake community, and for the Commonwealth of Virginia, which just suffered a terrible shooting at the University of Virginia this month,’ he said, referring to the shooting on November 13.

The supercenter was open to the public at the time of the shooting – and cops said the Walmart may have been busy as shoppers were preparing for Thanksgiving. It was due to close at 11pm on Tuesday night.

Virginia Governor Glenn Youngkin said in a tweet: ‘Our hearts break with the community of Chesapeake this morning.

‘I remain in contact with law enforcement officials throughout this morning and have made available any resources as this investigation moves forward. 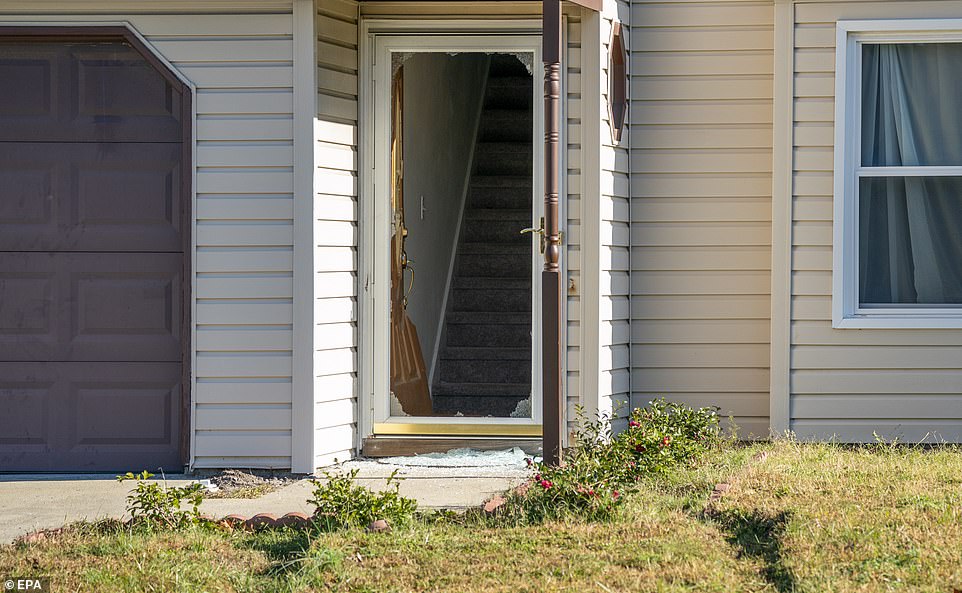 Shattered glass on the front door of the home in Chesapeake where the shooter lived. SWAT teams raided the property this morning

Walmart’s statement after the shooting on Tuesday night. The company has not released any other information. Governor Glenn Youngkin also released a statement

The gunman, believed to be a manager at the store, started shooting people in a Walmart in Chesapeake, Virginia 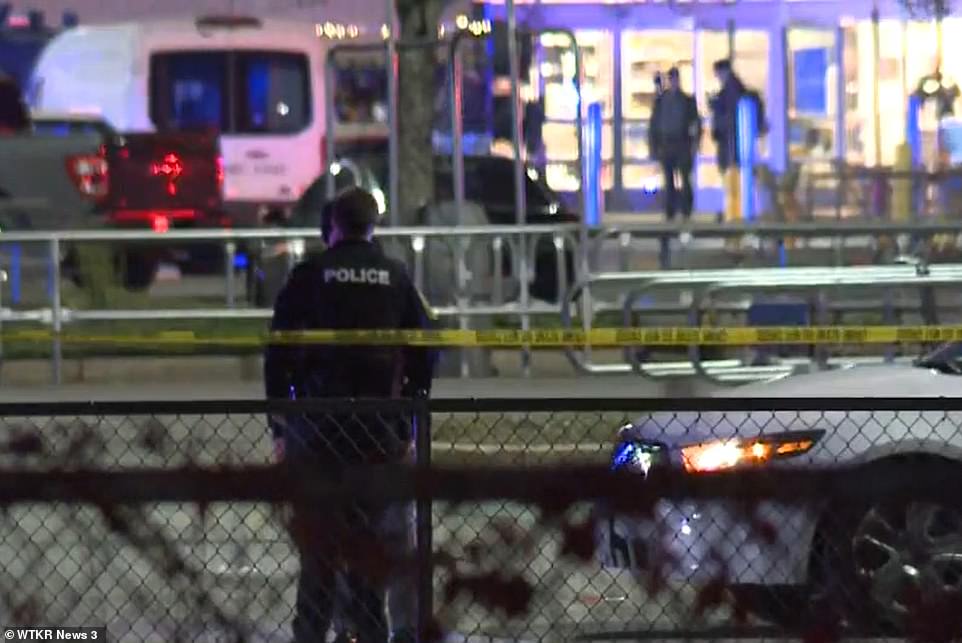 The shooter is understood to be dead, police said. Cops also confirmed that there were seven dead following the tragic ordeal in Walmart 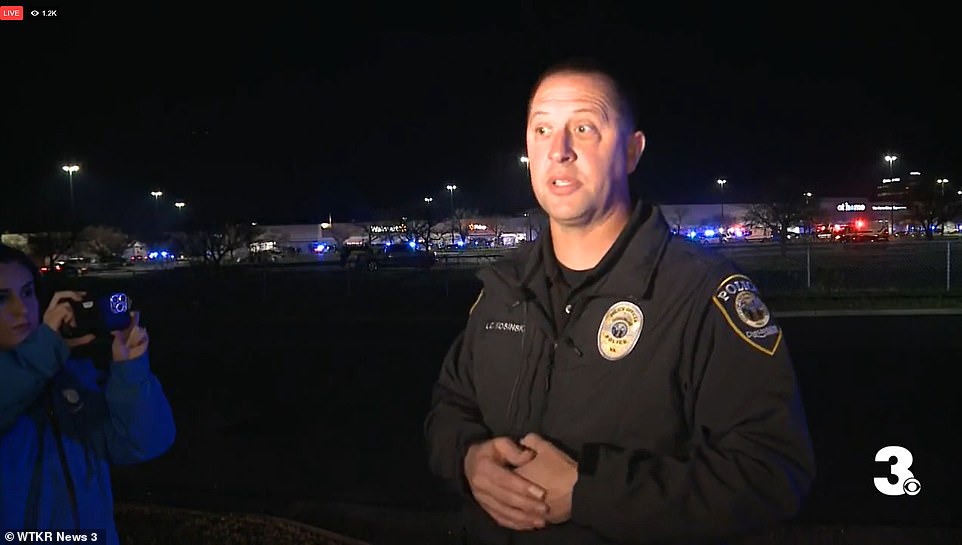 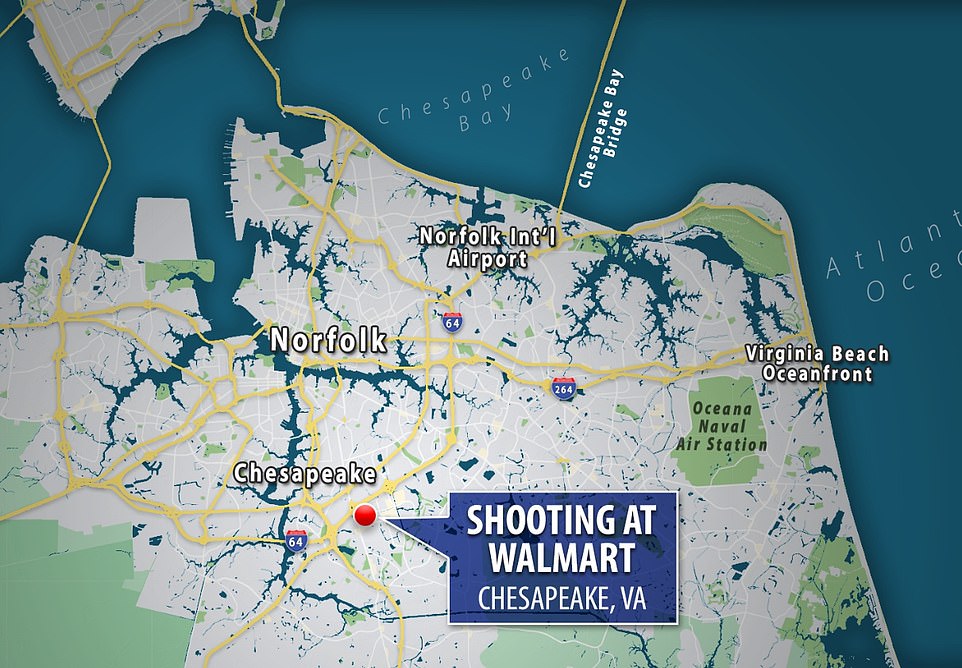 ‘Heinous acts of violence have no place in our communities.’

Virginia state Senator Louise Lucas, who represents that portion of Chesapeake was among the first to release a statement on the shooting. 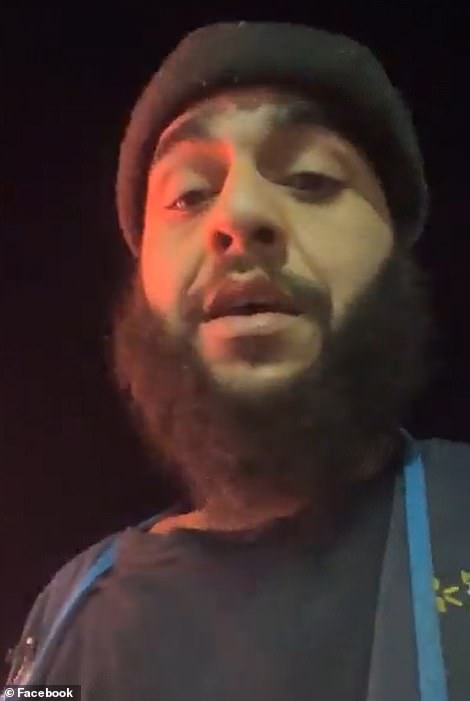 She said: ‘I am absolutely heartbroken that America’s latest mass shooting took place in a Walmart in my district in Chesapeake, Virginia tonight.

‘I will not rest until we find the solutions to end this gun violence epidemic in our country that has taken so many lives.’

Representative Elaine Luria posted to Twitter: ‘Enough is enough’, while Virginia senator Mark Warner said: ‘Sickened by reports of yet another mass shooting, this time at a Walmart in Chesapeake.’

Prosecutors told the court that Devin Chandler was sleeping when he was shot dead.

The students were returning from a field trip last Sunday when the terror unfolded.

Jones faces second-degree murder and other charges stemming from the shooting, which set off a manhunt and 12-hour campus lockdown before he was apprehended in suburban Richmond.

Jones was remanded in custody without bond and will next appear in court in December at 9.30am.

Police officer who can’t swim jumps into lake, pulls baby from water and saves child’s life
Shamima Begum would be HANGED if she went to her parents’ homeland Bangladesh, her lawyers say
Advertisement