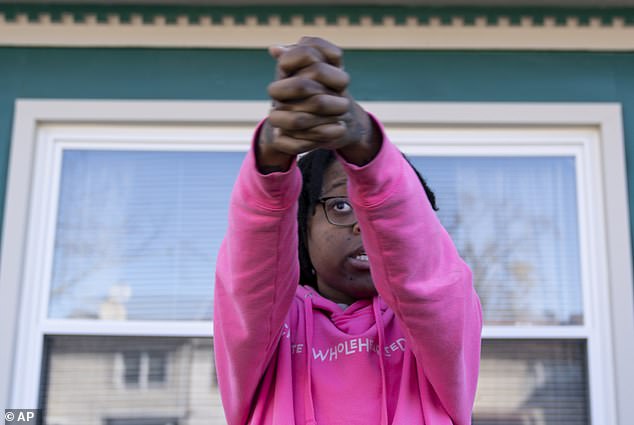 Walmart employees who survived a mass shooting carried out by their store manager have recounted in horrific detail how he silently strolled into a packed breakroom and began shooting at will, killing six people before turning the gun on himself.

In highly-distressing accounts of the shooting in Chesapeake, Virginia, the late shift workers told how Andre Bing, 31, walked into the room – where staff were planning their duties for the night – and ‘just opened fire’ .

Customers on last-minute Thanksgiving shopping trips described hearing the gunshots ring out – before body after body was carried out of the store.

Bing, a paranoid loner who was described a ‘nasty’ by coworkers, killed six people with a handgun then shot himself, police have said. Several more victims were rushed to hospital with serious injuries.

Walmart worker Briana Tyler demonstrated the moment Bing raised his pistol and began shooting at will in the breakroom, killing at least six people 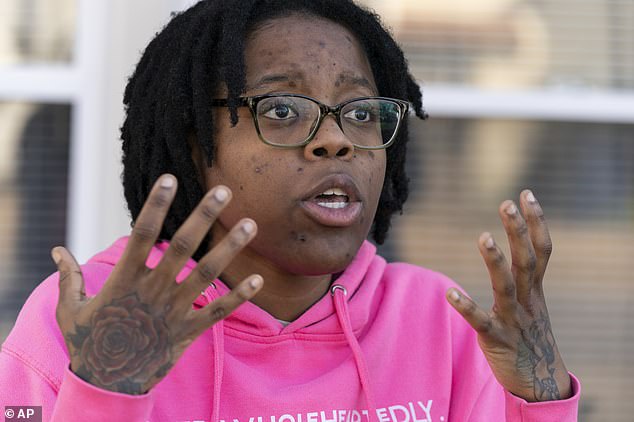 Tyler said she narrowly avoided being shot, and that the gunman’s bullet missed her head by an ‘inch’. ‘He didn’t say a word, he didn’t say anything at all,’ Tyler said. ‘I literally hadn’t even seen him before that point. He just came around the corner and started shooting. 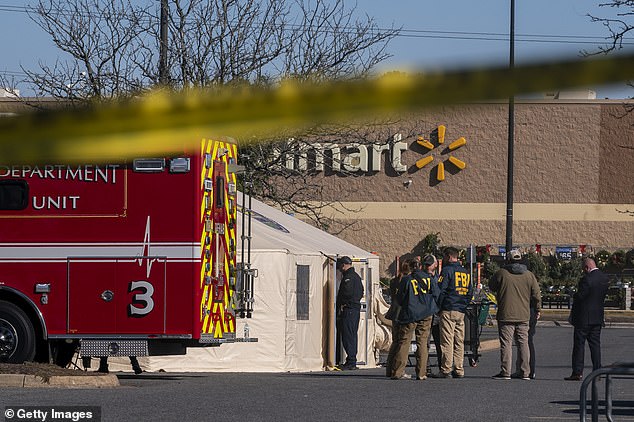 Police at the scene of the shooting on Wednesday morning. The FBI has joined the investigation 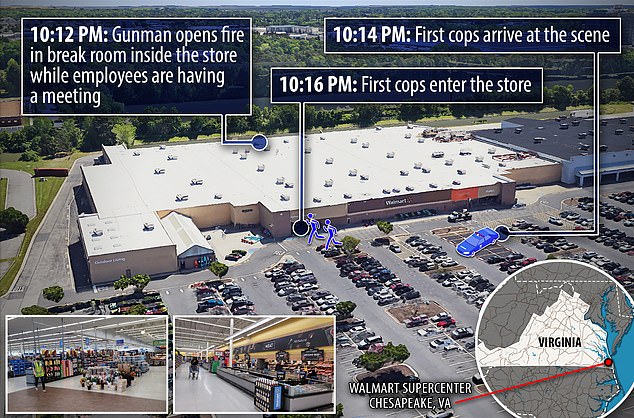 The gunman opened fire in the break room which is in the back of the store at around 10.12pm. The first 911 calls came in at 10.12pm and cops were at the scene at 10.14pm. They entered the store at 10.16pm, by which time the gunman had killed himself

Walmart employee Briana Tyler recalled the moment Bing walked into the breakroom and aimed the handgun at colleagues – mimicking his gesture as she gave a powerful account of the shooting.

‘He didn’t say a word, he didn’t say anything at all,’ Tyler said. ‘I literally hadn’t even seen him before that point. He just came around the corner and started shooting.

‘The first person that was in his eyesight, he shot him down and the next thing you know, he just started rigging throughout the entire break room but he did not say a word.’

Tyler said the gunman looked ‘directly at’ her and fired but ‘luckily missed’ her head by ‘an inch or two’.

She added: ‘As soon as my team said, “All right, we have a light night tonight,” I looked up and my manager just opened the door and he just opened fire.

‘He wasn’t aiming at anybody specifically. He just literally started shooting throughout the entire break room and I watched multiple people just drop down to the floor, whether they were trying to duck for cover or they were hit.’ 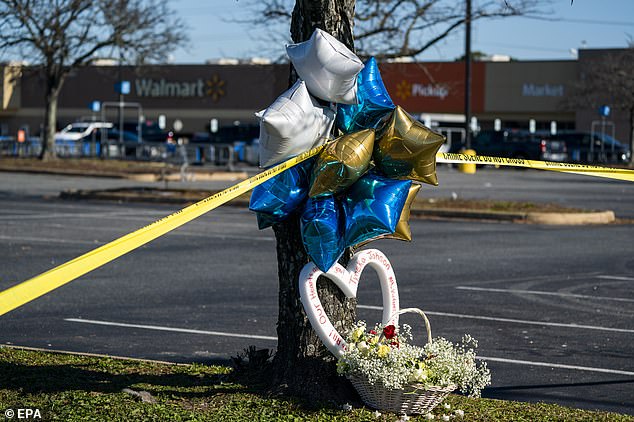 A makeshift memorial in the parking lot of the Walmart Supercenter where a mass shooting took place in Chesapeake, Virginia, USA, 23 November 2022

Donya Prioleau, another staff member who was in the breakroom, said she watched three friends ‘killed in front of me’.

In a Facebook post about the massacre, she said Bing began shooting ‘without saying anything’ and added: ‘I just watched 3 of my coworkers/friends be killed in front of me.’ 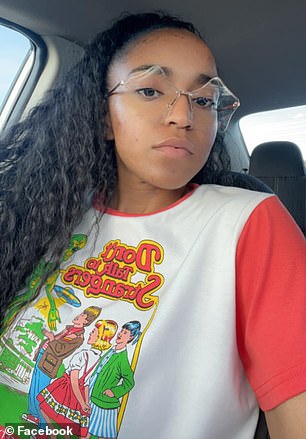 Donya Prioleau, another staff member who was in the breakroom, said she watched three friends ‘killed in front of me’.

Prioleau described her team at Walmart as ‘like a family’.

‘Andre killed them in cold blood,’ she said. ‘Thanksgiving is a holiday we celebrate with friends and family….there are those who cannot. I cannot unsee what happened in that breakroom.’

She added: ‘To answer some short questions: yes I was in the breakroom and yes I’m okay. Please just give me my time and space. I never thought I’d have to witness a tragedy first hand. I witnessed a lot that I cannot say or fully talk about but thank you all for checking in on me.’

Jessie Wilczewski described how she was spared by the killer store manager when he paused the rampage to send her home.

Wilczewski, who had only worked at the store for five days, described how she took cover under a table as the gunman ‘laughed’ while several of her co-workers were shot.

She said the manager then briefly stopped shooting, turned and pointed the gun at her. He reportedly told her to get out from under the table and said: ‘Jessie, go home.’

In the moments before the shooting, about 14 employees had gathered in a meeting room to learn about their duties for the night, she told WAVY.

Bing entered and began ‘firing shots from left to right’ while laughing. 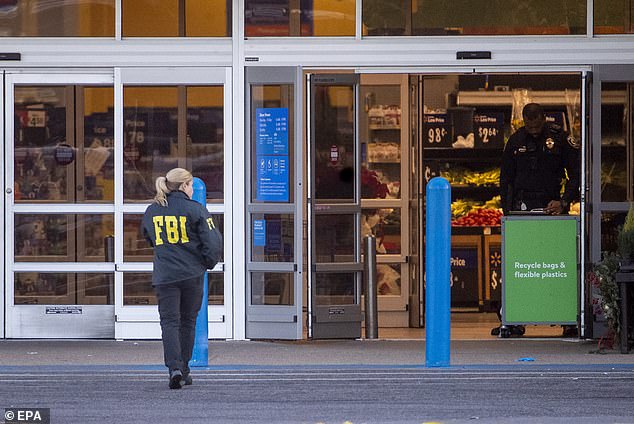 Law enforcement work the scene of a mass shooting at a Walmart, Wednesday, Nov. 23, 2022, in Chesapeake, Va. A store employee shot six people dead then killed himself last night in a pre-Thanksgiving rampage

She said she believes the attack was planned and victims were targeted. A motive is yet to be confirmed by police.

Another employee, who hasn’t been named, said he narrowly avoided being caught up in the shooting because he was a few minutes late for work.

Employee Kevin Harper recorded a Facebook Live video from outside the store after the shooting broke out.

As he films the heavy police presence, a woman with Harper appears to say she ‘played dead’ in the breakroom while Bing fired on her coworkers.

Harper adds: ‘I just left out the breakroom… he starts capping people up in there. He came in there and just started spraying. I’m sorry for the victims.’

Walmart customer Jeromy Basham was picking up last-minute items for a Thanksgiving celebration when he heard loud pops.

‘I thought someone had knocked over some huge shelf or something,’ Mr. Basham, 47, told the New York Times.

‘It was a group of several really, really, loud identical noises, followed with no noise.’

Moments later, someone yelled: ‘It’s a gun, get out.’

Basham fled with several others through an emergency back door. As he took cover behind some containers outside of the building, he watched for around an hour as around two or three bodies were carried out of the store.

One body, believed to be Bing, was brought out in a shopping cart. 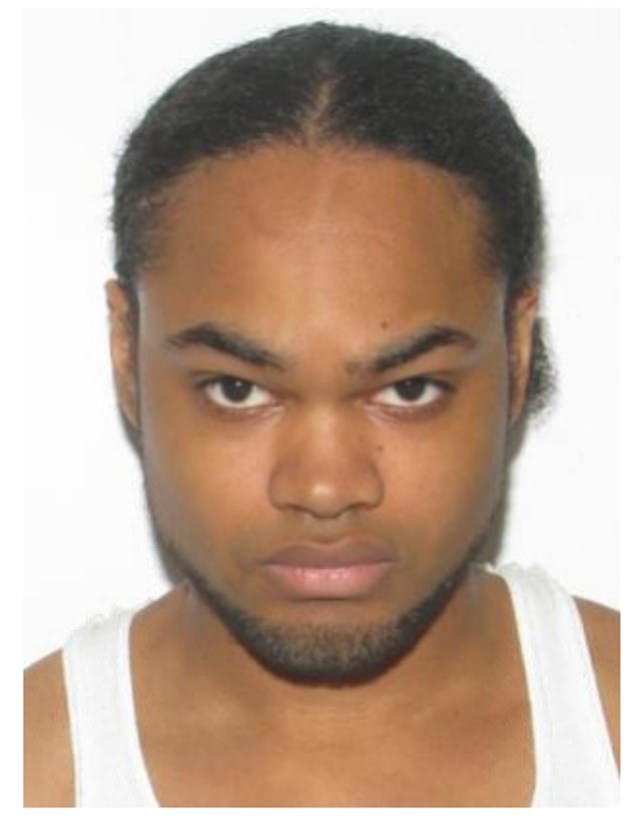 Andre Bing, 31, is the shooter from yesterday’s Walmart rampage. Police released this photo on Wednesday. They have not confirmed whether he had a criminal record 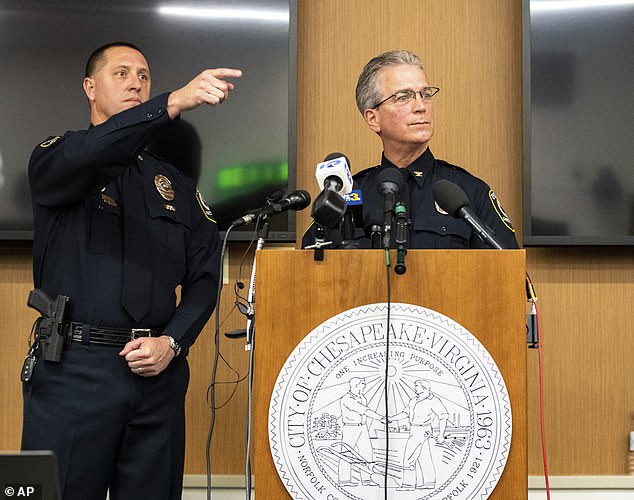