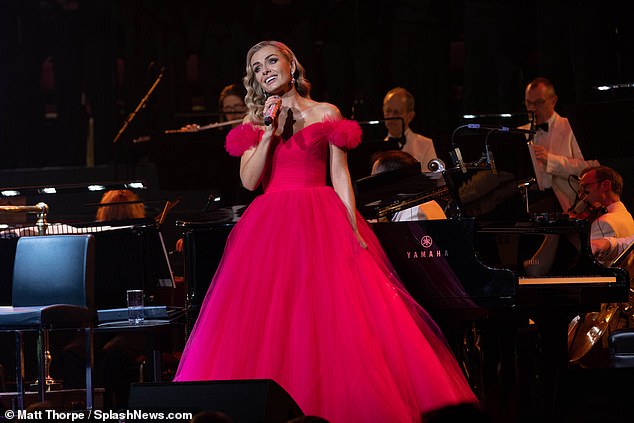 Katherine Jenkins wore two stylish outfits as she marked her 50th performance at the Royal Albert Hall with friends including Sir Cliff Richard and Andy Serkis on Thursday night.

The opera singer, 42, donned a glittering white gown for one part of her show, called Christmas with Katherine.

She later changed into an off-the-shoulder red ball dress with puffed sleeves for her concert which was part of the Christmas at the Royal Albert Hall season.

Glamourous: She later changed into an off-the-shoulder red ball dress with puffed sleeves for her concert which was part of the Christmas at the Royal Albert Hall season

Both of her frocks cinched in at the waist and tumbled down to the floor in beautiful ballgown style.

The mezzo-soprano, who is married to artist and director Andrew Levitas, 45, wore her golden locks in a side parting.

Her hair tumbled into loose waves over her shoulders and she kept her makeup simple.

Katherine opted for golden eyeshadow with a sweep of pale pink lipstick while she accessorised with beautiful dangling silver earrings. 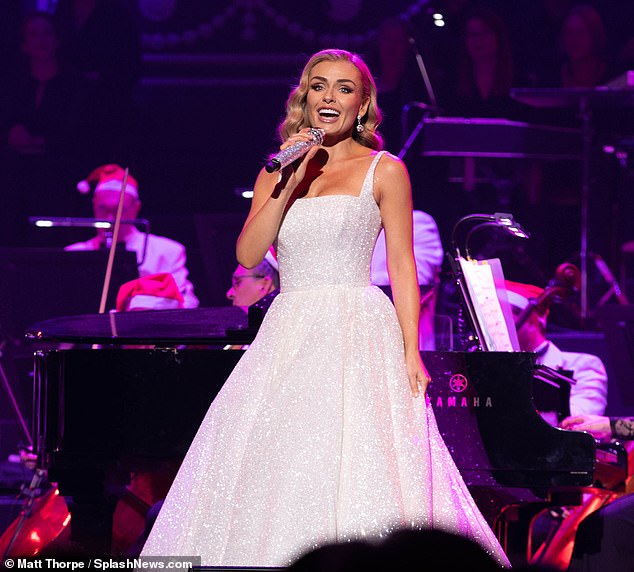 Effortless: The opera singer, 42, donned a glittering white gown. She was at the Royal Albert Hall to mark her 50th concert at the venue and performed with friends including Sir Cliff Richard 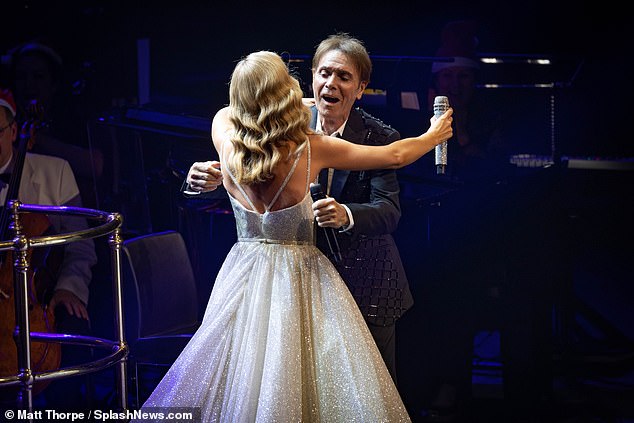 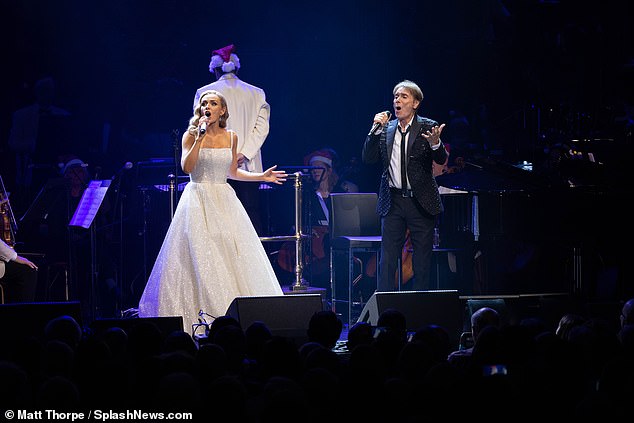 Duo: Sir Cliff and Katherine sang some of his classics including Saviour’s Day live on stage for the excited fans in the audience 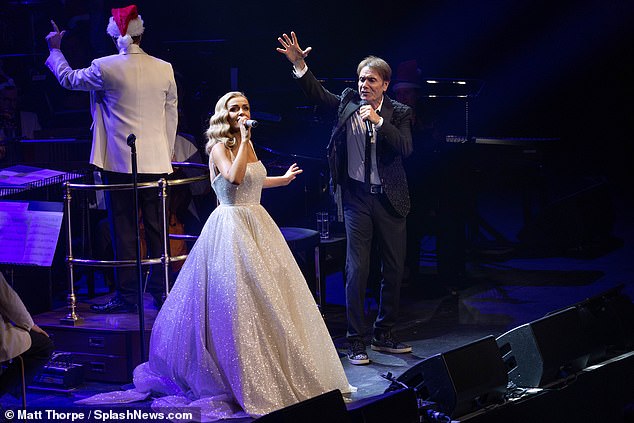 Singers: The pair smiled as they performed on the Royal Albert Hall stage on Thursday night as part of the festive evening

The 42-year-old sang festive favourites including Joy to the World, I Wish You Christmas and White Christmas.

Later, Katherine embraced Sir Cliff, 82, and smiled before they duetted some of his classics including Saviour’s Day.

The 82-year-old wore a glittery black tie and jacket paired with dark trousers.

She was also seen grinning as Andy Serkis, 58, played the saxophone for her.

The 58-year-old opted for a shiny jacket, black shirt and red tie for the event. 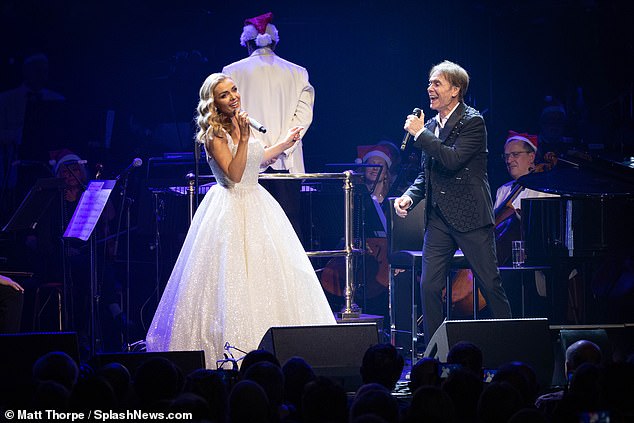 Grins: Katherine and Sir Cliff were celebrating her 50th concert at the Royal Albert Hall 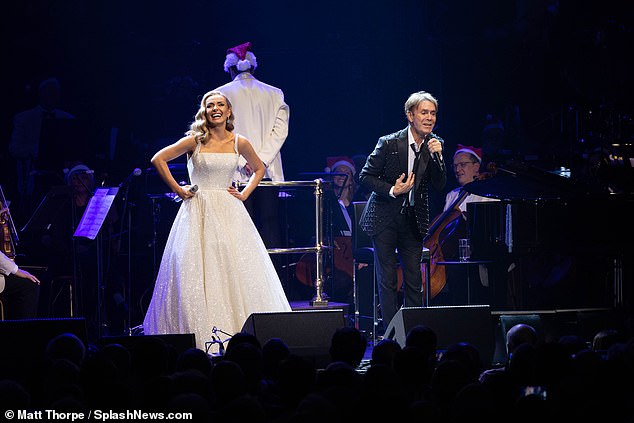 Laughs: The 42-year-old smiled as she looked out at the audience last night while Sir Cliff sang

She has been singing at the Royal Albert Hall since 2004, and has since released 13 albums and won two Classical Brit Awards.

Her Christmas celebration at the venue came just days after she stepped out with her husband for the 10th annual Tusk Conservation Awards on Tuesday. 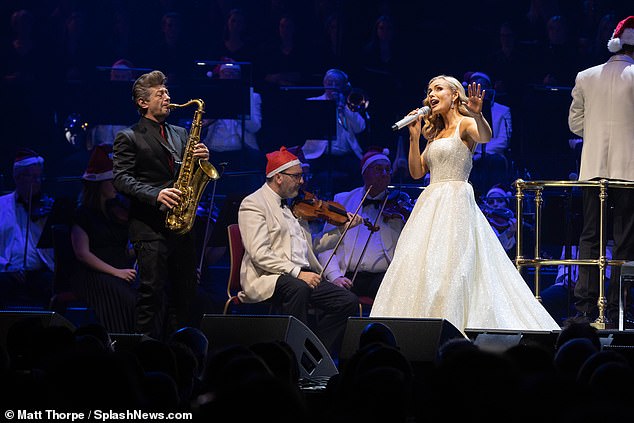 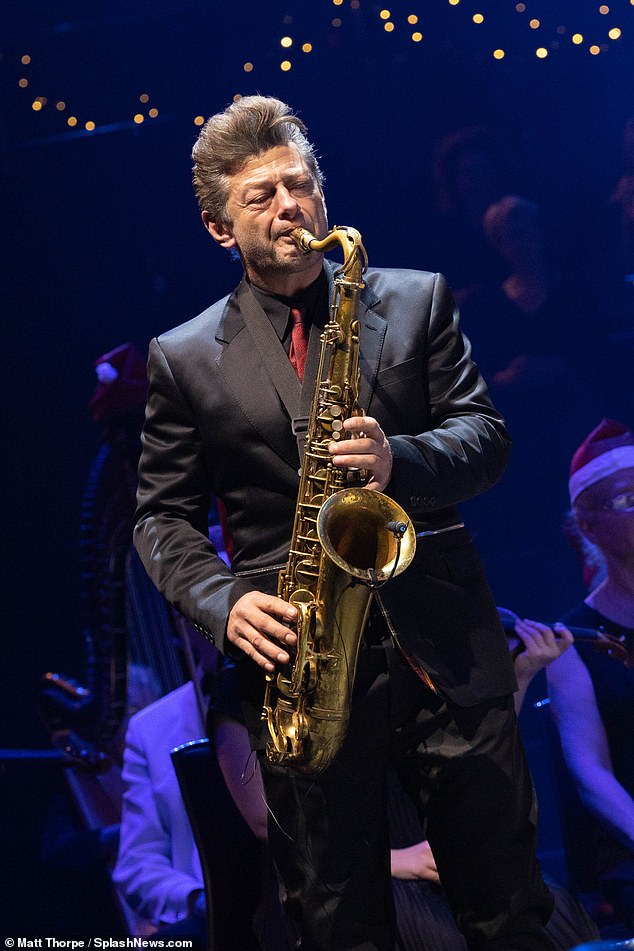 For the event, which took place at Hampton Court Palace, she stunned in a powder blue tulle ball gown.

Katherine wore her blonde locks in a centre part straightened down her back, and makeup including a winged eye and a glossy pink lip.

The 42-year-old has a connection with the Royal Family, as she was selected to record the first version of the new national anthem, God Save the King. 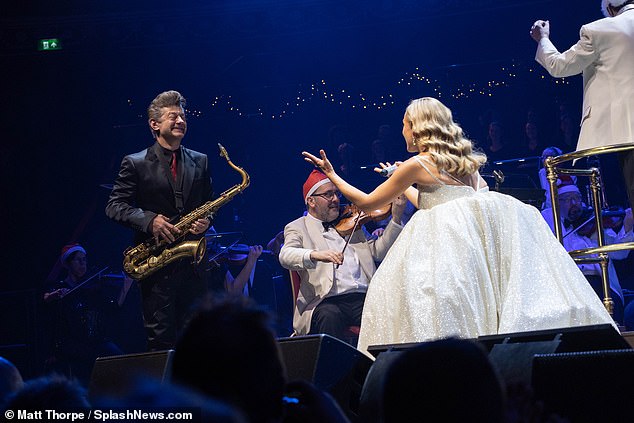 Praise: The 42-year-old put her arms up in the air as she appreciated Andy’s saxophone skills last night

The Welsh opera singer, 42, told Good Morning Britain hosts Susanna Reid and Ben Shepherd she had actually been recording something for the Queen after receiving the news Her Majesty had died at the age of 96.

‘At first we stopped what we were doing. We had a moment of silence,’ she said.

From a small church in a rural part of Sussex, Katherine was called by BBC Radio 4 asking her to close the World at One programme with God Save the King.

Katherine, who was one of the Queen’s favourite singers and who has performed for the Royal Family several times, said she had to ‘really think’ about the lyrics, which have changed to reflect King Charles III. 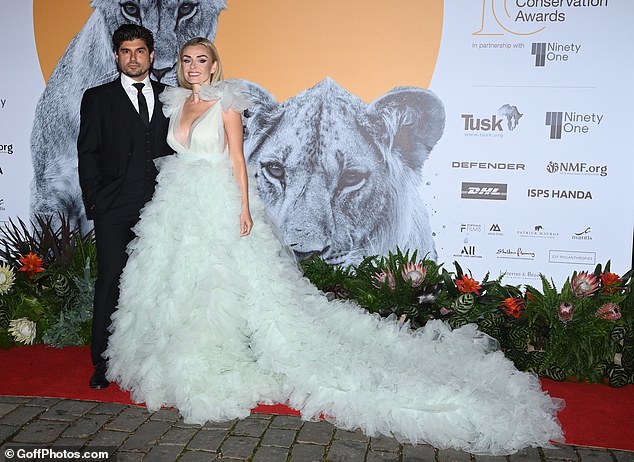 Date night: The mezzo-soprano, 42, stepped out at the event with her artist and director husband Andrew Levitas, 45