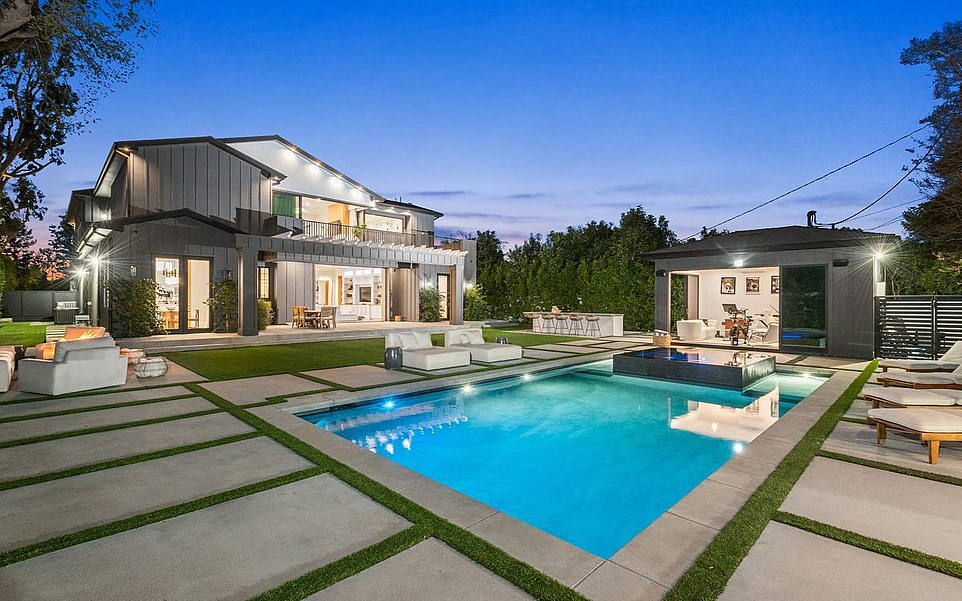 The 23-year-old pop singer sold her mansion in the up-scale suburban Encino area for $7million.

The Dear Society hitmaker bought the house when it was brand new nearly two years ago for $5.6 million through an off-market sale. It was sold without listing the property publicly.

The new homeowners will have a lot of room in which to roam in this San Fernando Valley property.

The 6,484 square foot dwelling was built in a modern farmhouse style and boasts five bedrooms and six bathrooms.

Inside comforts found in the two-story estate include a roomy chef’s kitchen, a dry bar and a state-of-the-art movie theater.

Outside, there’s a zero-edge pool and spa, as well as a stylish and large poolside cabana. 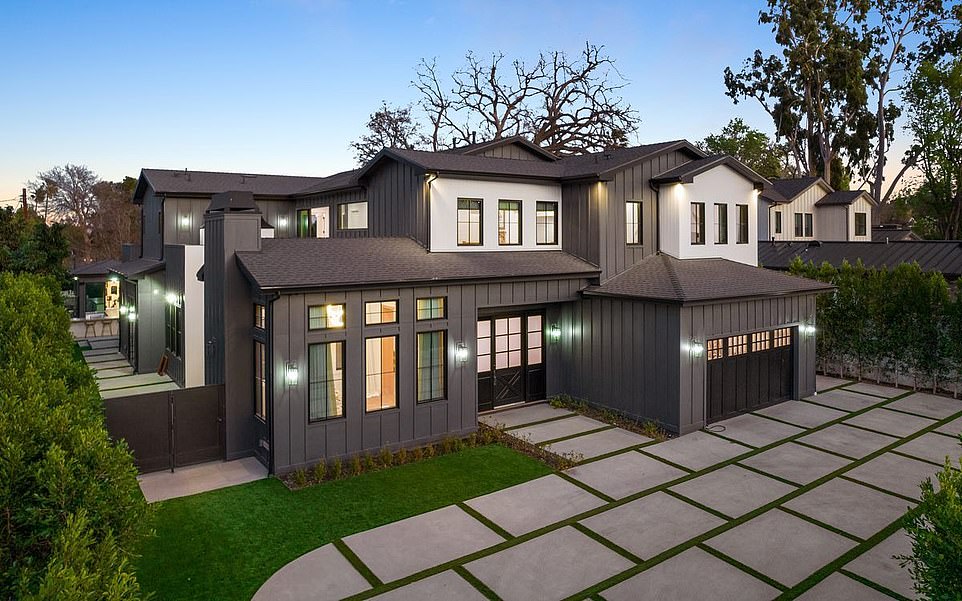 Leaving this place: The 23-year-old pop singer sold her mansion in the up-scale Encino area for $7million 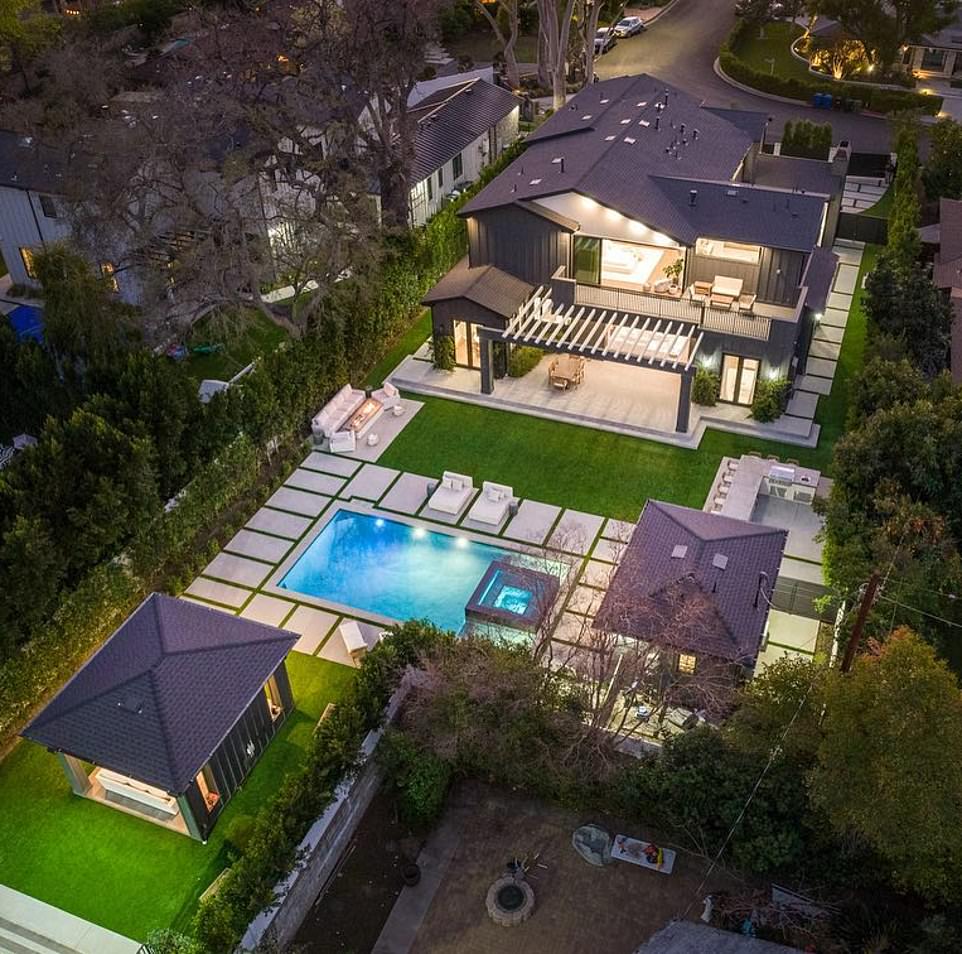 So much to look at: The new homeowners will have a lot of room in which to roam in this San Fernando Valley property. The 6,484 square foot dwelling was built in a modern farmhouse style and boasts five bedrooms and six bathrooms

And if they’re not swimming, the new residents can get their exercise using the in-ground trampoline or full-sized basketball court.

The luxurious home comes with a two car garage, but can support multiple vehicles in the driveway as well.

The entire property is protected by a sophisticated security system.

The Homesick singer has just returned from performing in sold-out shows in England, Germany, France, Belgium, Italy and Spain. 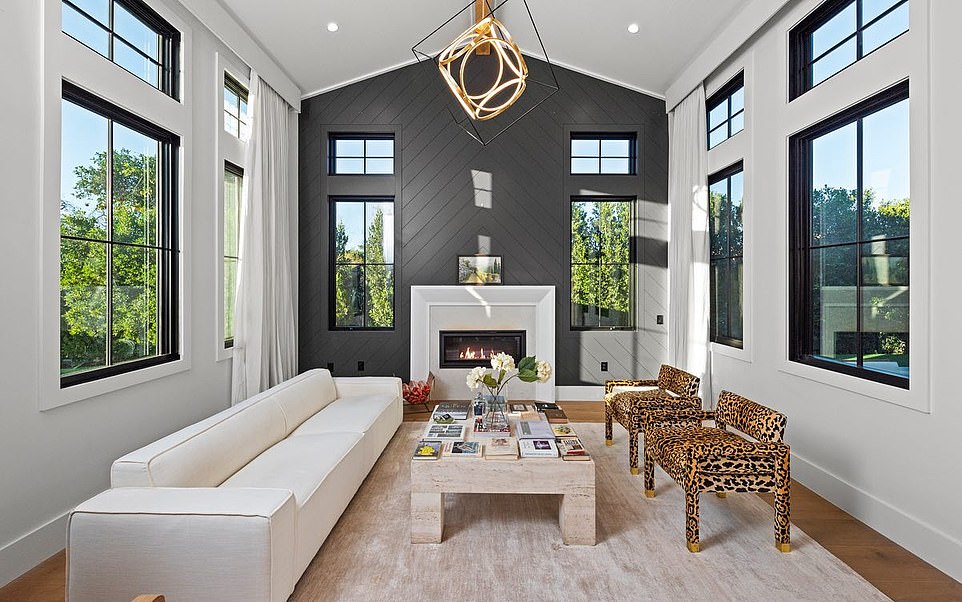 Modern charm: Inside comforts found in the two-story estate include a roomy chef’s kitchen, a dry bar and a state-of-the-art movie theater 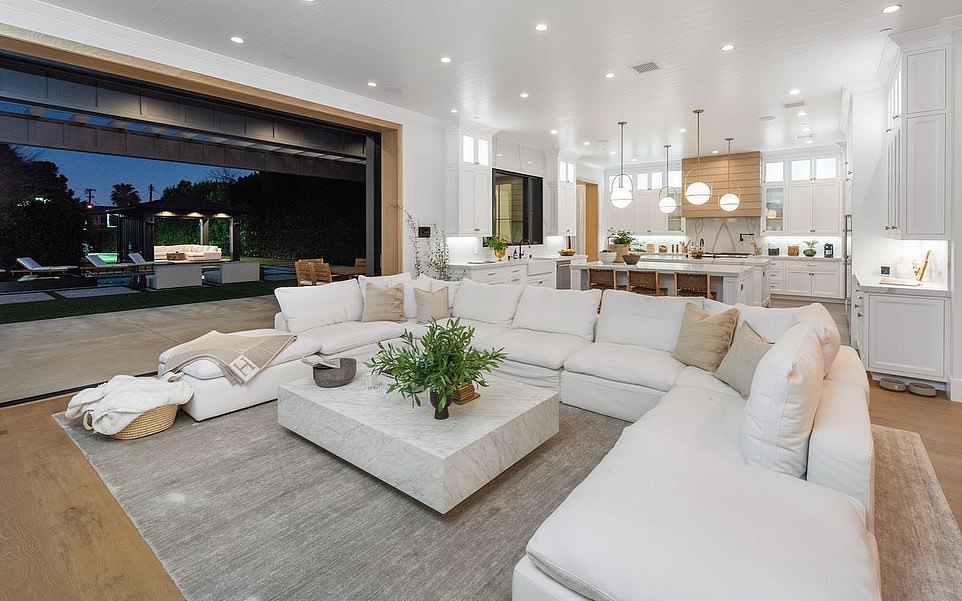 An indoor and outdoor feel: The wall opens up with a view of the back yard with zero edge pool

According to her website, the Good in Goodbye crooner will be heading out on the road again in August for some more overseas dates.

Madison’s recording career was kicked off with the help of Justin Bieber who shared a video of her belting out Etta James’ At Last back in 2012, when she was only 13.

Since then, the young performer has not only crafted a successful music career, but has created a powerful social media presence as an influencer with some 31 million followers.

This comes after Beer told DailyMail.com last year that her album Life Support – which she wrote and sang on – covers her struggle with mental health – specifically anxiety – while she touches on prescription drugs and delves into past toxic relationships. 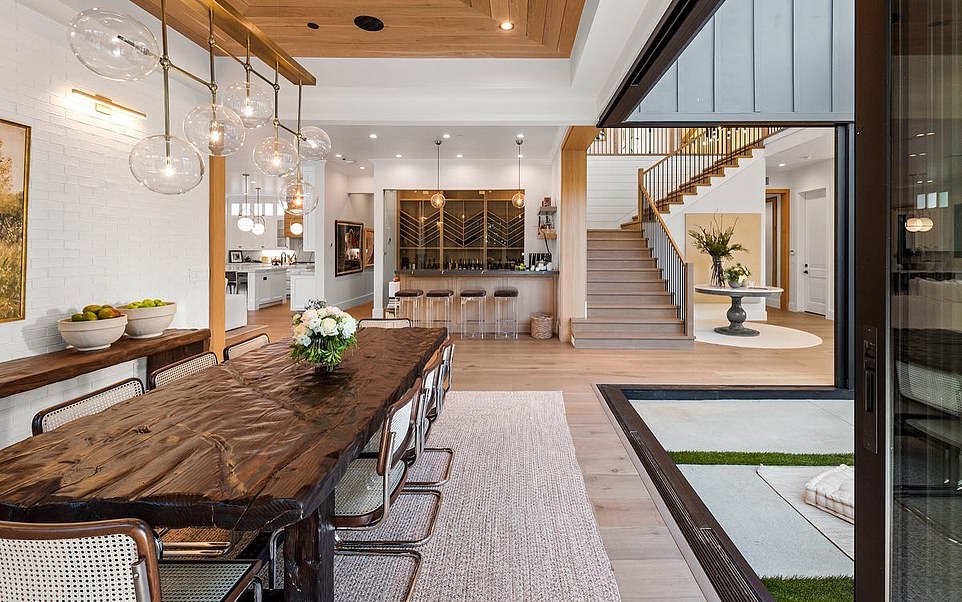 A nice place to party with pals: The dining room is large with a full bar behind it and an inviting entry way

‘Writing songs is like therapy for me,’ the star told DailyMail.com.

‘That’s why this album is called Life Support. It helped me get rid of the darkness and see the light.’ She added, ‘My inspirations sonically are really diverse. I guess I’m not an easy artist to pigeonhole, and a lot of these songs are like nothing I’ve ever attempted before.’

‘All of me is laid bare on this album; it’s been a really fulfilling experience to create something that feels so true to myself,’ said the New York native.

She has been romantically linked to Blake Griffin, Zack Bia, and Jack Gilinsky. She has also reportedly been close to Brooklyn Beckham. 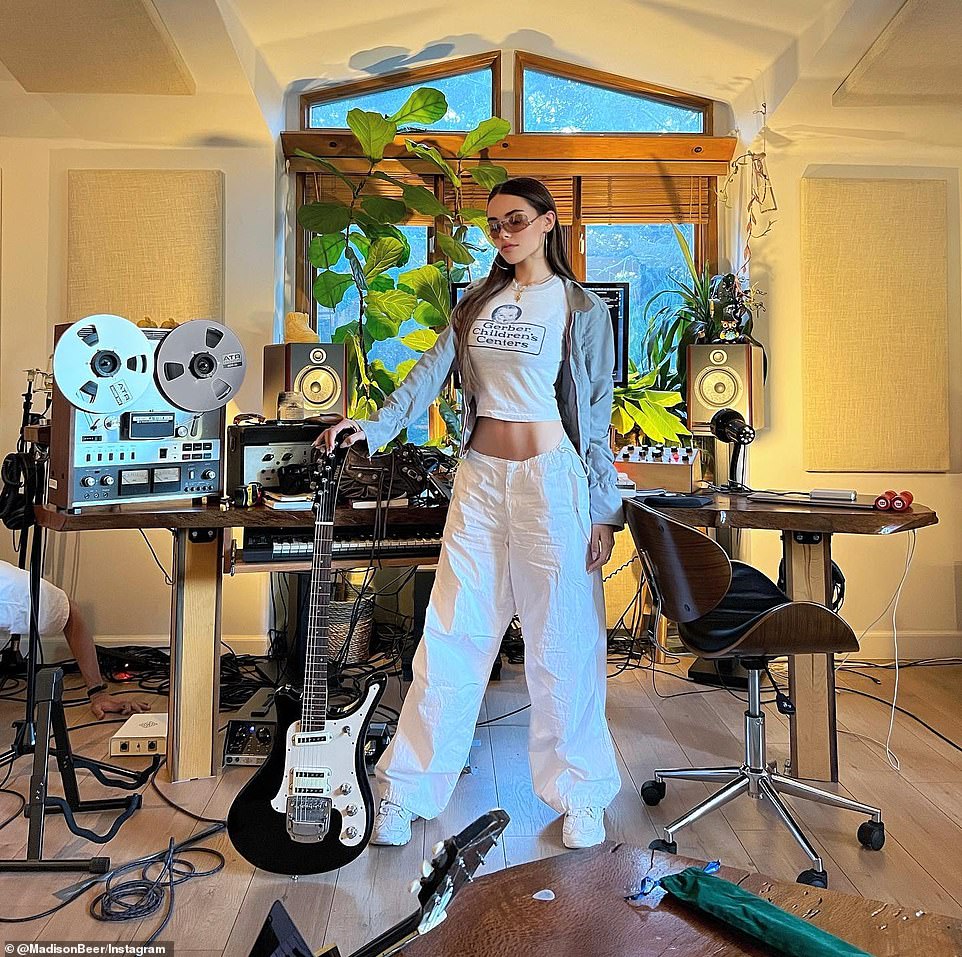 Madison at work: She has worked on music at her house but is now looking for another address to call home

Sonically Life Support is reflective of Madison’s eclectic musical tastes, while lyrically it pushes the boundaries of accepted norms from female singer songwriters in pop in the same way as Rina Sawayama’s SAWAYAMA or Hayley Williams’ Petals For Armor do.

There are references to mental health and prescription drugs,toxic relationships and to the atypical life that Madison has led since famously being discovered by Justin Bieber on YouTube aged just 13. An album written as catharsis, Life Support is delivered as a document of all Madison has experienced and a self-care guide to coming out the other side.

Madison Beer’s Life Support is a strong personal and artistic statement as she wrote her own songs, producing and creating her own visuals.

Beer broke down each song and the meaning behind it exclusively for DailyMail.com

She said Good In Goodbye that she was inspired by her real life loves. ‘At my age, when you break up with someone, you tend to get back together at least a few times,’ she told DailyMail.com.

‘This captures the weird, purgatory place you’re in. You know you’re not with the right person, but you can’t bear to sever the ties. The song starts with someone diving in to water – that’s me pushing myself to take the plunge and end it.’

In Follow The White Rabbit – part inspired by The Matrix, part Alice in Wonderland, ‘There’s a raw undertone to this song, a cool, grungey sound that took it to a different place. It’s a genre of music I’ve always liked but never felt able to tap in to before.’

Effortlessly is one of her favorites. ‘It is one of the most vulnerable songs on the album. It’s about me and my mental health—the struggles I’ve been through that led me to therapy and medication and what they forced me to confront,’ she shared with DailyMail.com. ‘My mental health journey is not something I’ve spoken about before in my music.’

Stay Numb and Carry On is a continuation of her mental health story, but more poetic than personal. 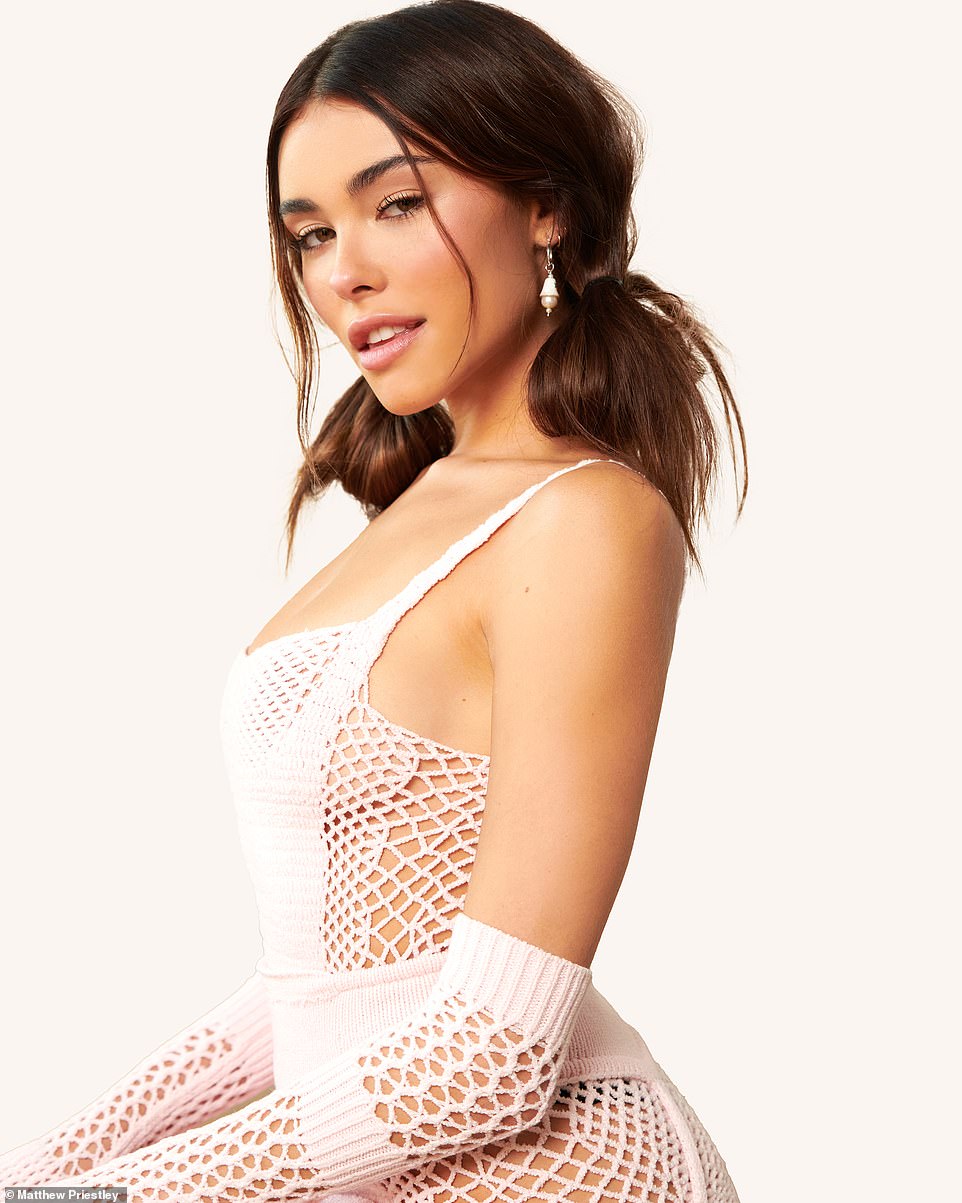 New tunes: Beer released her debut album Life Support from Epic Records. And the star told to DailyMail.com that the album – which she wrote and sang on – covers her struggle with mental health and prescription drugs while also talking about her past relationships

‘I tend not to react to situations. I used to think it was negative to not always stay calm, but I was wrong. You end up locked inside yourself, convinced that the whole world is against you or that you’re the only sane person and everyone else has gone mad.’

Blue is one of the oldest tracks on the album. It’s about knowing when to quit a relationship. ‘I know when to run/When my make-up runs.’ ‘I’m excited with that lyric. It’s the perfect analogy, when the mascara runs, it’s time to get out,’ she said.

Regarding The Interlude: ‘I’m a huge fan of Daft Punk – who were the key inspirations behind this interlude. The song has a beautiful melody and the lyric was built around that. It’s saying that you should feel like the most special person when you’re in a relationship, not just someone in your partner’s world.’

Homesick is one of the album’s oldest songs.

‘It’s a fantasy/fiction story about how I’ve felt my whole life – homesick for a planet which I’ve never been to. I know it sounds strange, but growing up, I felt like I was in some sort of Truman Show. I grew up in a peculiar way that not many people experience – recognition at 12, being signed so young and having to fend for myself in the world of social media. It was hard. I felt super isolated. I didn’t fit in to the world in a regular way and I still don’t. The song closes with a sample of Rick and Morty, my favorite cartoon.’

Selfish was one of the hardest for her to record. ‘There were a lot of tears in the studio that day. The song started off about my ex and evolved to include my dad too. They’re both Geminis and I realized at the time of writing that I was dating someone who reminded me of my dad. That was overwhelming.’ 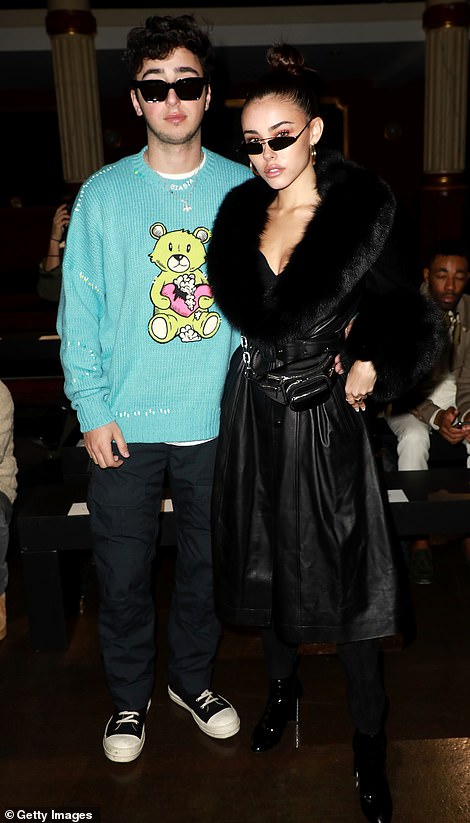 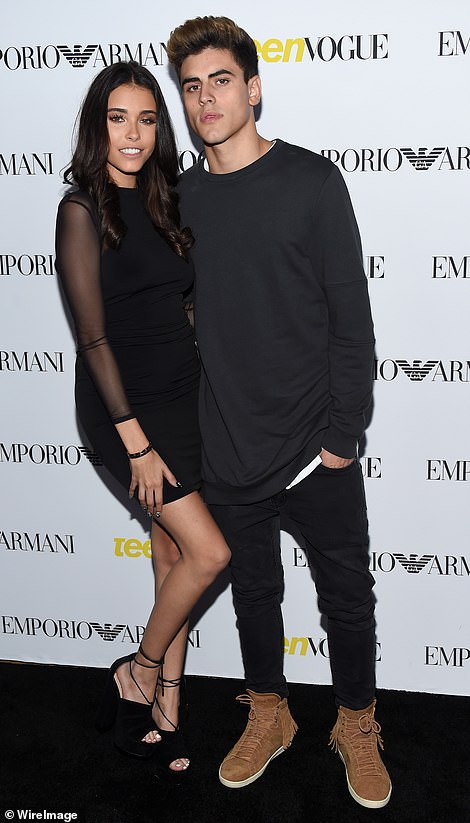 The men in her past: She has been romantically linked to Zack Bia, and Jack Gilinsky. She has also been reportedly close to Brooklyn Beckham