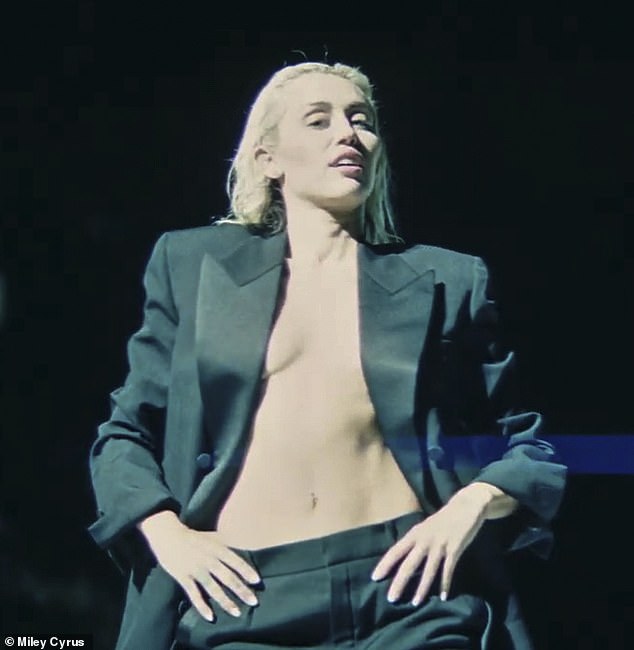 From January 13 to January 19, the singer’s newest track was streamed over 96 million times on the service alone.

The single is reportedly about how Miley, 30, is doing after her divorce from Australian actor Liam Hemsworth, 33, and was also released on his birthday, January 13.

Flowers soared to the top of the Billboard Hot 100 songs in its debut week after Taylor Swift’s Anti-Hero had eight weeks at number one.

The former Disney star sold an impressive 70,000 of the track in its first full week which continues to grow. 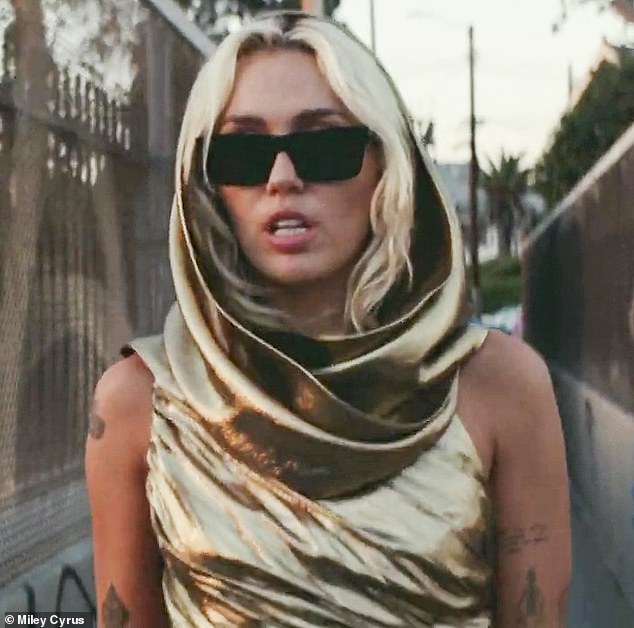 Congrats: From January 13 to January 19, the singer’s newest track was streamed over 96 million times on the service alone

The pop song’s lyrics allude to her failed relationship with the actor including a double entendre about Miley watching her marriage and the Malibu home they once shared ‘burn’ to the ground.

‘We were right / til we weren’t / built a home and watched it burn,’ she sings.

In November 2018, their home was completely destroyed as a result of the devastating Woolsey Fire.

They wed a month later but split after less than a year in August 2019. 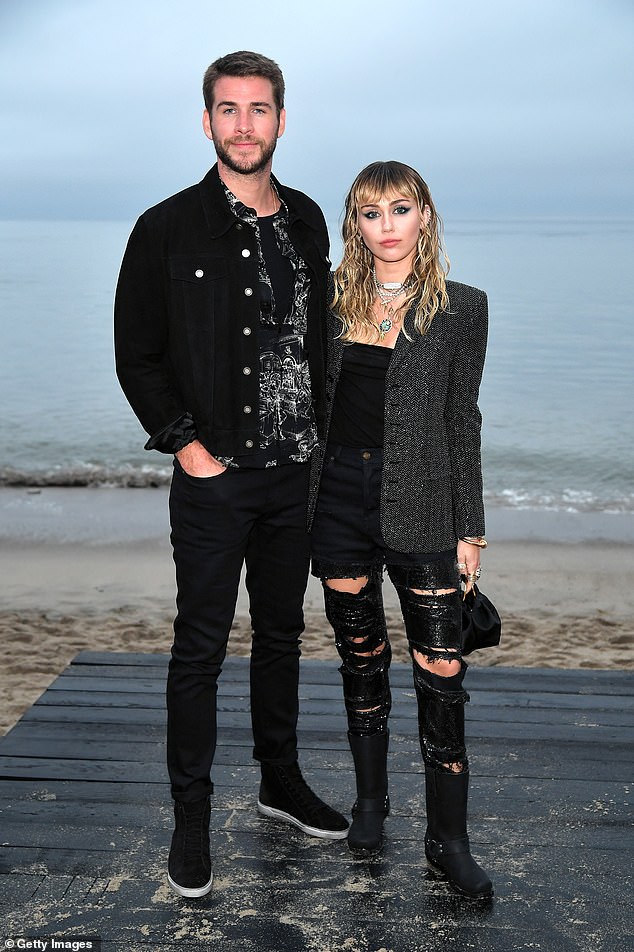 Former flame: The single is reportedly about how Miley, 30, is doing after her divorce from Australian actor Liam Hemsworth , 33, and was also released on his birthday (pictured in 2019)

The pair dated on/off for nearly a decade after meeting on set of their film, The Last Song (2010), when Miley was 17 and Liam was 19.

But now, Miley is the symbol of self love as she belts out: ‘I can buy myself flowers / Write my name in the sand / Talk to myself for hours / See things you don’t understand’

The video starts with footage of the Los Angeles skyline at dusk before the camera pans to Cyrus in a glimmering gold dress with a hood and sexy stomach cut-out.

Her bleach blonde hair is barely visible and designer shades conceal her doe eyes during the confident strut. 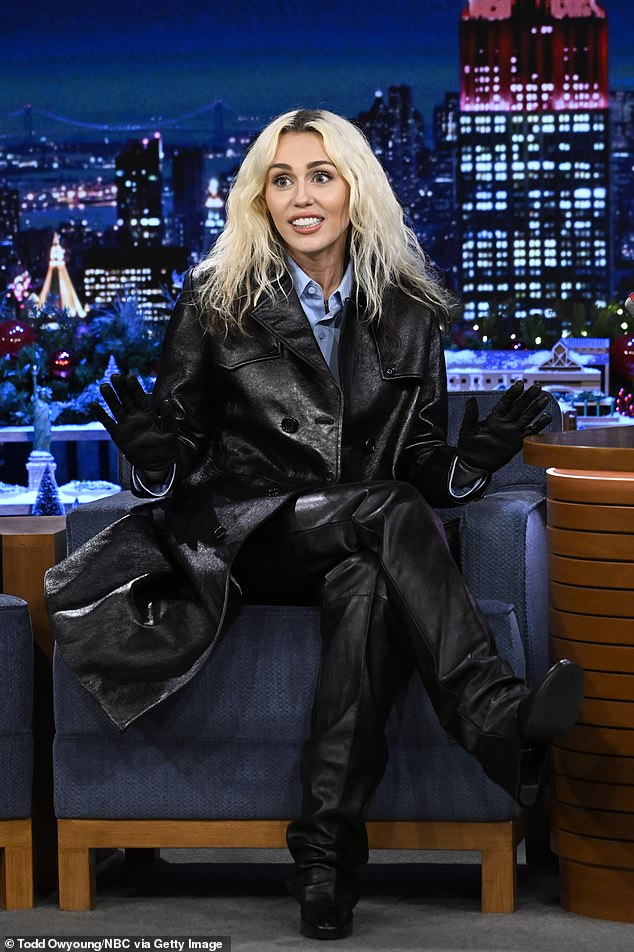 Going from somber to upbeat, Miley rips off her dress’ hood and ties her hair up while trekking across LA’s Runyon Canyon in a pair of sky-high heels for the remainder of the chorus.

Miley climbs up a paved road with a spring in her step before the video cuts to footage of the star in the backyard of her sprawling Studio City home.

She strips off her designer dress and proceeds to dance on the lawn in black lingerie as sprinklers spray over her.

The Plastic Hearts hitmaker takes an impressive dive into her resort-style pool and swims towards the shallow end.

She then appears with her gym-honed physique sprawled out on the pool’s ledge, giving viewers a closer look at her lacy black bra and panties.

Miley’s hair is soaking wet and brushed off her face while she seductively caresses her figure for the song’s second verse: ‘Paint my nails, cherry red / Match the roses that you left / No remorse, no regret / I forget every word you said’ 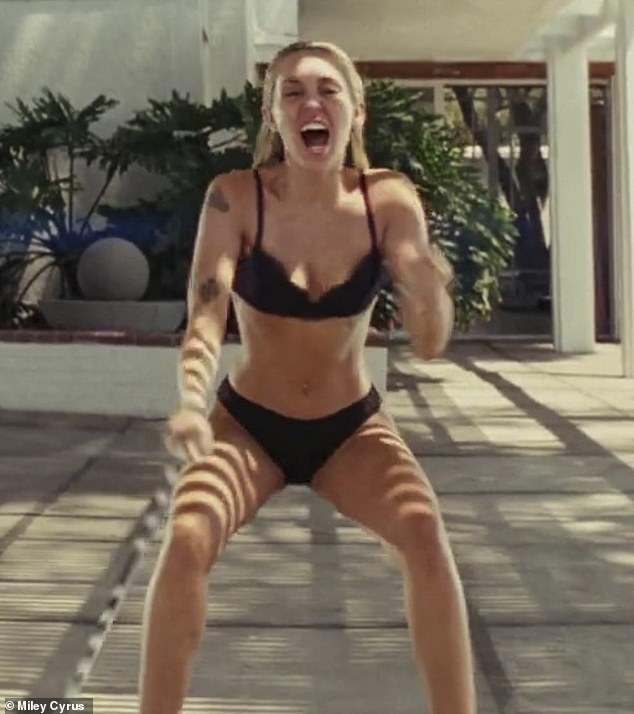 Intense: It jumps into the second chorus with footage of Miley, still clad in her skimpy black two-piece, showing off her intense fitness regimen

It jumps into the chorus with footage of Miley, still clad in her black two-piece, showing off her intense fitness regimen that includes battle rope exercises, resistance training and some very suggestive hip thrusts.

The next scene shows Miley with her backside exposed while taking a steamy shower.

She raises her hands in the air and closes her eyes as she lets water flow down from the shower head.

Miley reappears in a white robe and her hair twisted up in a bath towel as she aggressively rummages through her closet.

The damp haired beauty decides to go topless beneath an oversized black blazer styled with matching trousers and sandals. 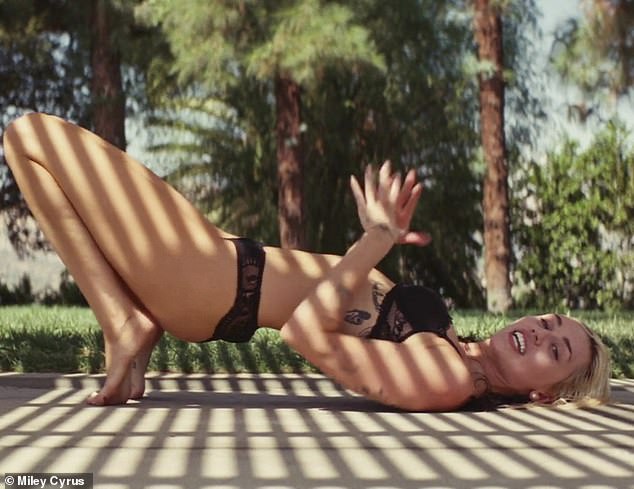 Sexual healing: And then she does some very suggestive hip thrusts

She strolls stoically across the marble floors in a hallway before bursting into dance in various rooms of the house, including a living area with a gorgeous piano surrounded by floor-to-ceiling windows.

The erratic dancing continues as night falls and the backyard is lit up by an array or blue and purple mood lights.

Having gone topless beneath her blazer, Miley teases viewers by letting is slowly slip off her shoulders.

The video comes to a close with Miley breathing heavily with her hands on her hips as she gazes directly into the camera. 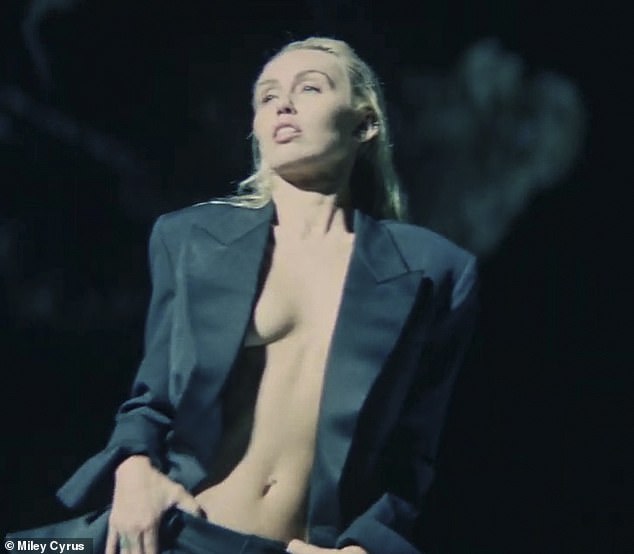 Night fall: The erratic dancing continues as night falls and the backyard is lit up by an array or blue and purple mood lights