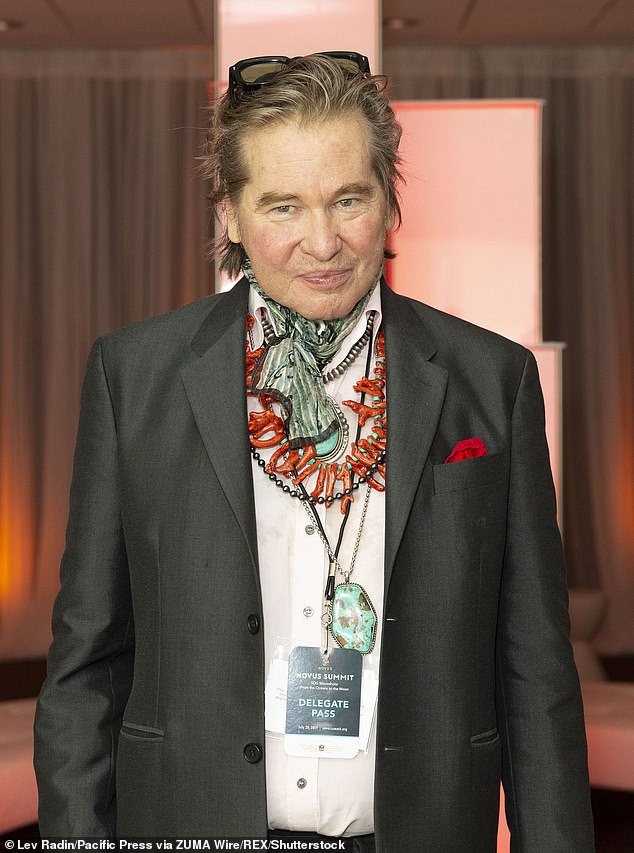 Val Kilmer will reprise his role as Tom ‘Iceman’ Kazansky in the upcoming Top Gun: Maverick, despite losing his voice from a tracheotomy in 2014 following a throat cancer diagnosis.

The actor, 62, rose to fame in the original 1986 blockbuster before finding himself blacklisted by Hollywood for being difficult to work with.

He has now admitted he begged producers to be included in the sequel, which radical new artificial voice technology has allowed for.

Opening up: Val Kilmer will reprise his role as Tom ‘Iceman’ Kazansky in the upcoming Top Gun: Maverick, despite losing his voice from a tracheotomy in 2014 following a throat cancer diagnosis

He argued: ‘Tom was Maverick, but Maverick’s nemesis was Iceman. The two went together like salt and pepper.

‘It didn’t matter that the producers didn’t contact me. As The Temptations sang in the heyday of Motown soul, “Ain’t too proud to beg.”‘

One morning in 2015, he awoke in his own pool of blood, which he had coughed up after a lump had grown, causing difficulty swallowing.

Writing in his autobiography, I’m Your Huckleberry, that he ‘presumed this was the day of my death’, he soon received an emergency tracheotomy. 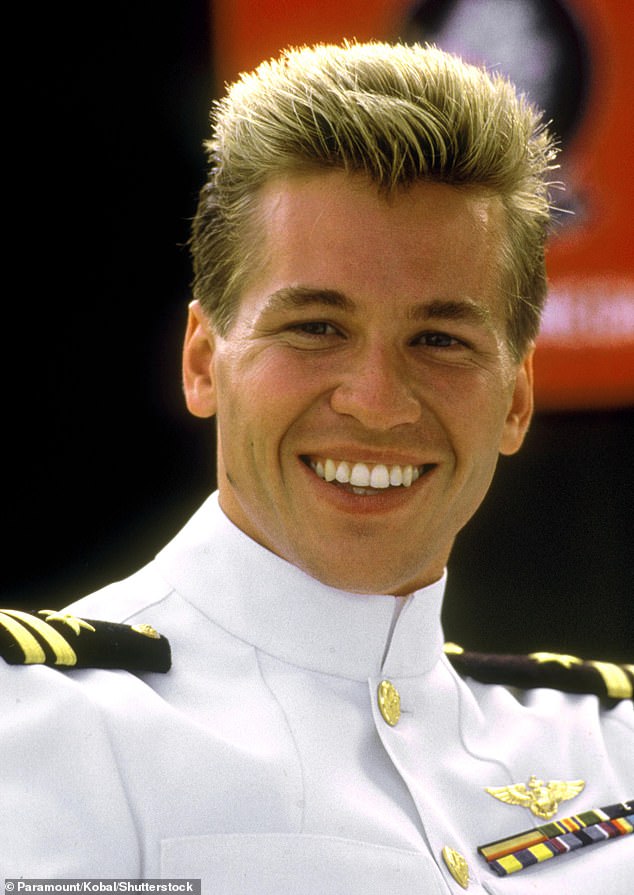 Throwback: The actor, 62, rose to fame in the original 1986 blockbuster before finding himself blacklisted by Hollywood for being difficult to work with

The procedure included an incision through the front of his neck as well as his windpipe, the scars of which Val covers with scarves.

Having dates the likes of Cher, Cindy Crawford, and Angelina Jolie in his 1980s heyday, his medical bills were footed by the iconic singer due to his financial woes.

She even arranged for him to be treated at the renowned David Geffen School of Medicine, where he underwent chemotherapy and radiation for two months.

Afterwards, he lived at the Believe songstress’ lavish guest house in Malibu, writing in his book, ‘Once Cher works her way inside your head and heart, she never leaves.’

Val said: ‘I was struck by throat cancer. After being treated, my voice as I knew it was taken away from me. People around me struggle to understand me when I’m talking.

‘But despite all that I still feel I’m the exact same person.’

London-based firm Sonantic used his voice recordings from throughout his career, which were fed to their AI to create the lifelike yet artificial mock-up.

Film producers could potentially use the tool – described as ‘Photoshop for voice’ – for voiceovers if they have a role in mind that would be suited to Val’s tones.

Val, whose career has spanned nearly four decades, has starred in blockbusters such as Willow, The Doors, Tombstone and Batman Forever.

But after undergoing a tracheotomy in 2014 as part of his treatment for throat cancer, Kilmer’s voice is now barely recognisable.

Luckily, Kilmer himself is also able to use the AI tool in his personal life, to help him communicate, rather than relying on a voice box to speak. 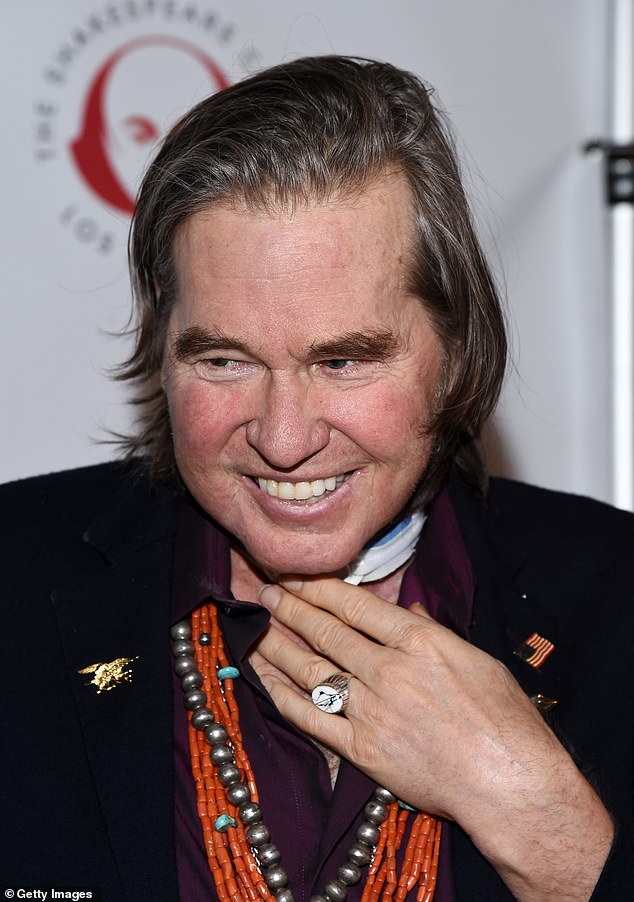 Val, pictured here in 2019, underwent a tracheotomy in 2014 as part of his treatment for throat cancer and now speaks with a voice box

The artificial voice, which speaks in the first person as Kilmer in Sonantic’s video, could easily be mistaken for the real thing.

Praising the results, the real Val Kilmer said: ‘I’m grateful to the entire team at Sonantic who masterfully restored my voice in a way I’ve never imagined possible.

HOW WAS AI VAL KILMER MADE ?

For the project, Sonantic gathered audio recordings of the actor from his films, which were digitally ‘cleaned’ to remove background noise.

Next, the experts generated transcripts from the audio before pairing the audio and text together in short chunks that could be fed to the AI during its training.

The firm generated more than 40 different voice models and selected the ‘most expressive one’, said CTO John Flynn.

Kilmer can use the tool in his personal life, to help him communicate, by inputting new sentences for the AI to say.

‘As human beings, the ability to communicate is the core of our existence and the effects from throat cancer have made it difficult for others to understand me.

‘The chance to tell my story, in a voice that feels authentic and familiar, is an incredibly special gift.’

Sonantic CTO and co-founder John Flynn described the ambitious project in a blog post on his company’s website.

The firm is mostly used to working with video game studios like Obsidian, Embark, Sumo Digital to record dialogue for their characters.

Flynn told MailOnline his firm were approached by Kilmer’s team late last year as they were creating the Amazon Prime documentary, Val.

‘We all came together – Val as someone who’d lost their voice and Sonantic as a company who creates best in class quality voices,’ he said.

‘There was lots of brainstorming around how we could work together and what we could do – poetry, interactive games, other promotional material for films he might be involved with.

‘But it always came back to the fact we wanted to give him something for his craft, something that had flexibility to enable him to create moving forward, so we ended up creating a voice model for him.’ 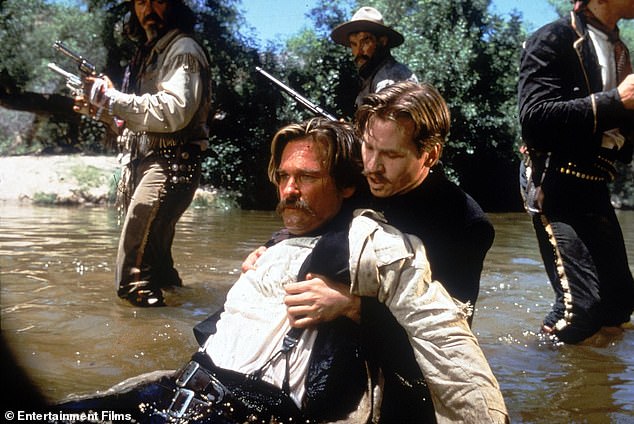 For the project, Sonantic gathered audio recordings of the actor from his films, which were digitally ‘cleaned’ to remove background noise.

Next, the experts generated transcripts from the audio before pairing the audio and text together in short chunks that could be fed to the AI during its training.

The firm generated more than 40 different voice models and selected the ‘best, highest-quality and most expressive one’. The results left Kilmer’s son, Jack, close to tears.

‘We’d worked on the voice model and heard it so many times, but when we played it for Val and his team it was incredibly emotional for us,’ Flynn told MailOnline.

‘I remember talking to Jack after presenting the voice model, and him telling us how powerful it was, like it was the first time he’d heard his dad’s voice in years, so he was quite moved.’

Kilmer will be able to use the AI model in both his professional and personal life, according to Flynn.

‘Kilmer can take part in TV or film productions that require voice overs or replacement dialogue that will be created by Sonantic’s easy-to-use computer app,’ he told MailOnline. ‘He can license that audio to different productions and studios.

‘The voice model can be used as a personalised replacement to robotic speech generating devices and help him communicate in his day-to-day life.’

The CTO wouldn’t reveal to MailOnline whether his firm is working with any other actors in a similar way.

‘We believe actors will always work real-life jobs but this gives them the opportunity to earn money doing virtual work too,’ he said.

‘For example, they can turn up for an important audition while their voice model works on an advertisement or other work.’

The film contains thousands of hours of footage ranging from home videos to test shots for his iconic films such as Top Gun. 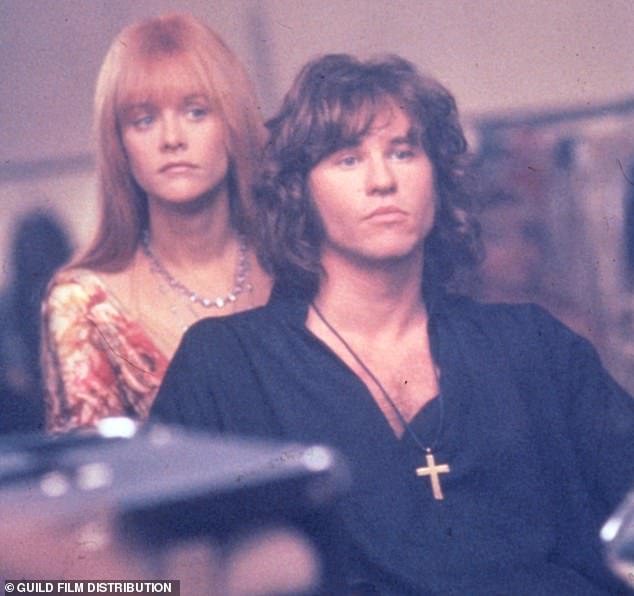 Simone Ashley reveals Bridgerton series three will have even LESS sex in it
Madonna, 63, showcases her incredible figure in black bustier and fishnet tights
Advertisement