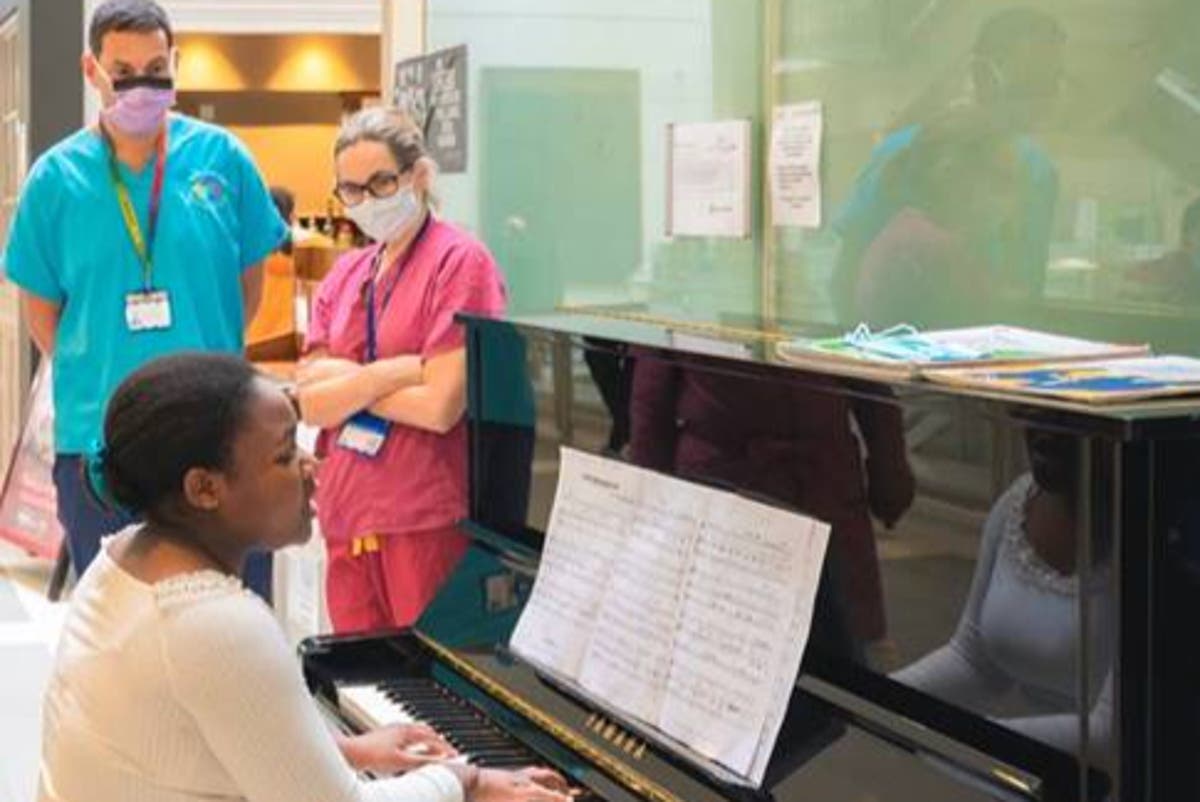 teenage pianist who suffered severe hand injuries in a car crash has been able to rekindle her dream of becoming a professional musician after life-changing surgery.

Naiole Caldas Missi, 19, returned to Chelsea and Westminster hospital to play for two of the doctors who led her long rehabilitation from injuries suffered a decade ago.

She is due to start a degree in commercial music at Canterbury Christ Church university in the autumn.

Naiole, from Hounslow, had been returning with her family from a holiday in Portugal in 2012 when their car overturned in Paris.

She suffered nerve damage and burns to her dominant right hand that resulted in the skin tightening, restricting the flexibility between her index and middle finger. Her sister was also seriously injured.

After a month in a Paris hospital, Naiole returned to London and began years of treatment – including numerous surgeries and therapy sessions – at Chelsea and Westminster hospital, which has a specialist burns unit.

“After the accident it was really bad,” she said. “I couldn’t really move it.

“Over the years it was becoming very difficult to play harder music. But ever since the last surgery, it’s changed completely. It’s been such a big help.

“The care was just amazing. Every single doctor, nurse and therapist who treated me, they have always been positive and tried to understand why music and playing the piano is so important to me.”

Naiole, who also sings, added: “I never once in my life thought, ‘my hand’s going to be in a terrible state and I won’t be able to do what I want with it’.

“The clinicians’ positive mood reflected on me, and kept me thinking that I could do whatever I wanted — even if it’s a bit different, or a bit different-looking.”

Her treatment was led by Dr Isabel Jones, a consultant in burns and plastic surgery, and Dr Maxim Horwitz, a consultant hand and orthopaedic surgeon.

Dr Horwitz said: “My role was to try to improve the movement in her fingers and make sure she had better function and ability in her fingers.

“With someone like her, children often develop scar tissue as they grow. My role was to help her overcome some of the scar tissue and release the joints of the finger to allow better movement.

“Some of the original injury was caused by friction when her hand was outside of the window when the car rolled. It’s like a burn. She couldn’t spread her fingers out and it was difficult to bend her fingers.

“She has had a very good recovery. She is an extremely positive person who has fully embraced her rehabilitation. She used the piano as an instrument of rehabilitation – she was able to do her exercised just by playing.

“This musical tribute brought a tear to many eyes — a huge thank you to Naiole for showing us the true value of the work we do.”