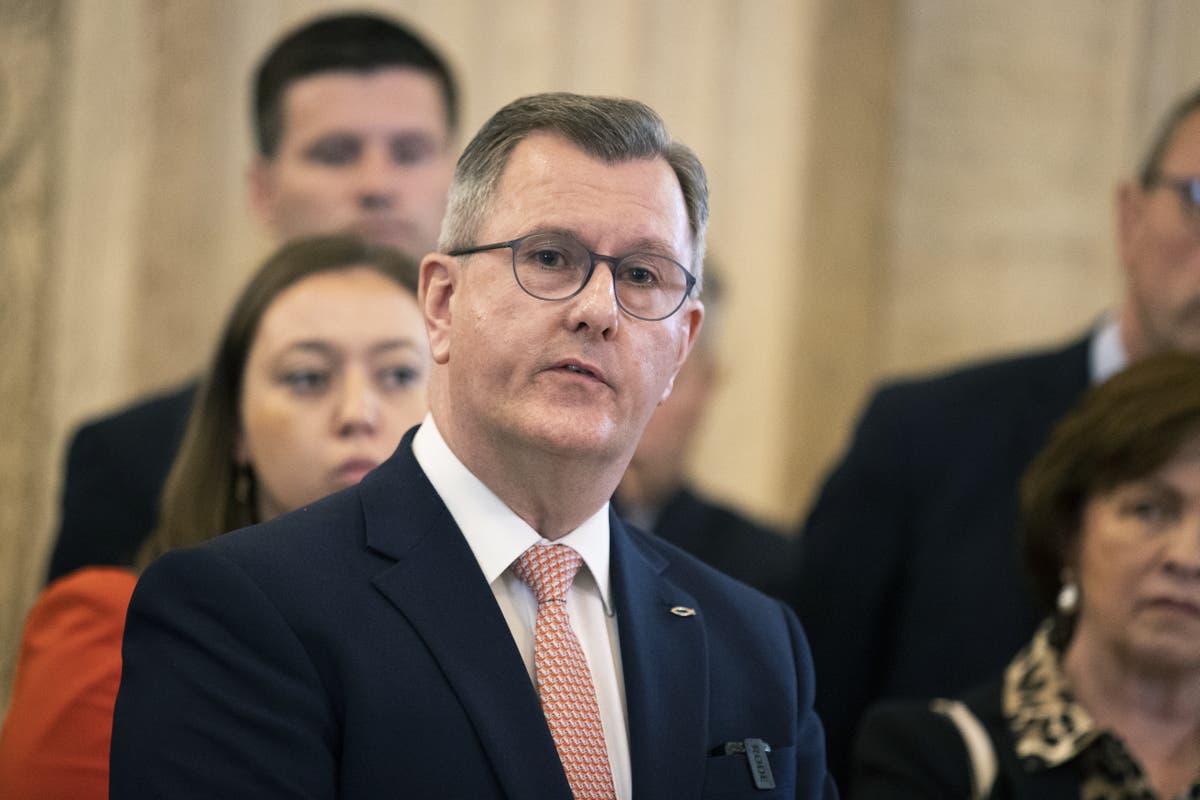 Party leader Sir Jeffrey Donaldson commented ahead of Prime Minister Boris Johnson’s visit to the region on Monday to hold talks with the main Stormont parties in a bid to get powersharing restored.

The Stormont institutions have been plunged into crisis after the DUP refused to re-enter a devolved executive following the recent Assembly election in protest at the contentious post-Brexit trading arrangements.

The Prime Minister’s visit comes amid heightened tensions between the UK and EU over the prospect of Mr Johnson moving to override elements of the protocol by way of domestic legislation at Westminster.

Brussels has made clear that such unilateral action to walk away from a key plank of the Brexit Withdrawal Agreement would represent a clear breach of international law.

The protocol, agreed by the UK and EU as a way to maintain a free-flowing Irish land border, has created economic barriers on the movement of goods between Great Britain and Northern Ireland, causing resentment and anger among many unionists and loyalists.

However, a majority of MLAs in Stormont’s newly elected Assembly represent parties that support retaining the protocol, claiming that it offers Northern Ireland some protection from the negative economic consequences of Brexit.

That Assembly has been unable to convene due to the DUP’s refusal to engage in the institutions until major changes to the protocol are secured.

Ahead of Mr Johnson’s visit, Sir Jeffrey made clear that verbal commitments on future action would not suffice.

“We await to hear what the Prime Minister has to say, but we will not make judgments based on words. It is decisive action that must be taken. The problems have been clearly identified and I have set out seven tests against which action will be judged.

“Until that action is taken, the consensus necessary for powersharing in Northern Ireland does not exist. We respect the mandate received by other parties but equally they must recognise the clear view expressed by the unionist electorate.

“We have been waiting a long time for this moment and unionism has been both reasonable and patient.

“Were the situation reversed, no one would seriously argue that it would be sustainable for nationalist concerns to be ignored. We must deal with the problems that exist, restore consensus and then move forward on that basis.”

The Stormont election saw Sinn Fein displace the DUP to become the overall largest party in Northern Ireland for the first time.

The DUP remains the largest unionist party in the region and, under Stormont rules, a new executive cannot be formed unless it agrees to nominate to the post of deputy first minister.

The DUP has also blocked the nomination of a new Assembly speaker, meaning the legislature at Parliament Buildings in Belfast cannot meet while the impasse continues.

Sinn Fein, which is now entitled to the first minister’s role, has accused the DUP of holding the people of Northern Ireland to ransom by not allowing Stormont to function in the midst of a cost-of-living crisis.

At the weekend, UK Government sources said Mr Johnson will use a series of private meetings with party leaders to deliver a “tough message” that they must come together to form an Executive and Assembly if the problems with the protocol are to be fixed.

He is expected to say that while the UK Government will “play its part to ensure political stability”, politicians must “get back to work” so they can deliver on “bread and butter issues” for the voters.

UK ministers have repeatedly said they will act unilaterally if an agreement cannot be found to reduce the impact of the Irish Sea trade checks, which have been blamed for disrupting businesses and fuelling community tensions.

In his talks, Mr Johnson is expected to say that while the Government “will always keep the door open to genuine dialogue”, there will be “a necessity to act” to protect the Good Friday Agreement if there is no change in the EU position.

He will insist the Government has never suggested scrapping the protocol and will acknowledge there will always have to be a treaty governing the UK’s relationship with the EU in respect of Northern Ireland in order to prevent the return of a hard border with the Republic of Ireland.

However he will say the “delicate balance” of the 1998 peace accord has been upset, eroding the historic economic bonds linking Northern Ireland and the rest of the UK, leaving the unionist community feeling like its aspirations and identity are threatened.

The Prime Minister will argue that the UK and EU’s “shared objective” should be to agree a reformed protocol which can command “the broadest possible cross-community support” when it faces a consent vote in the Assembly in 2024.

Mr Johnson will also use his visit to guarantee the delivery of three pre-existing commitments on a language and culture package; ensuring women and girls have access to abortion services; and introducing new measures to deal with the legacy of the past.