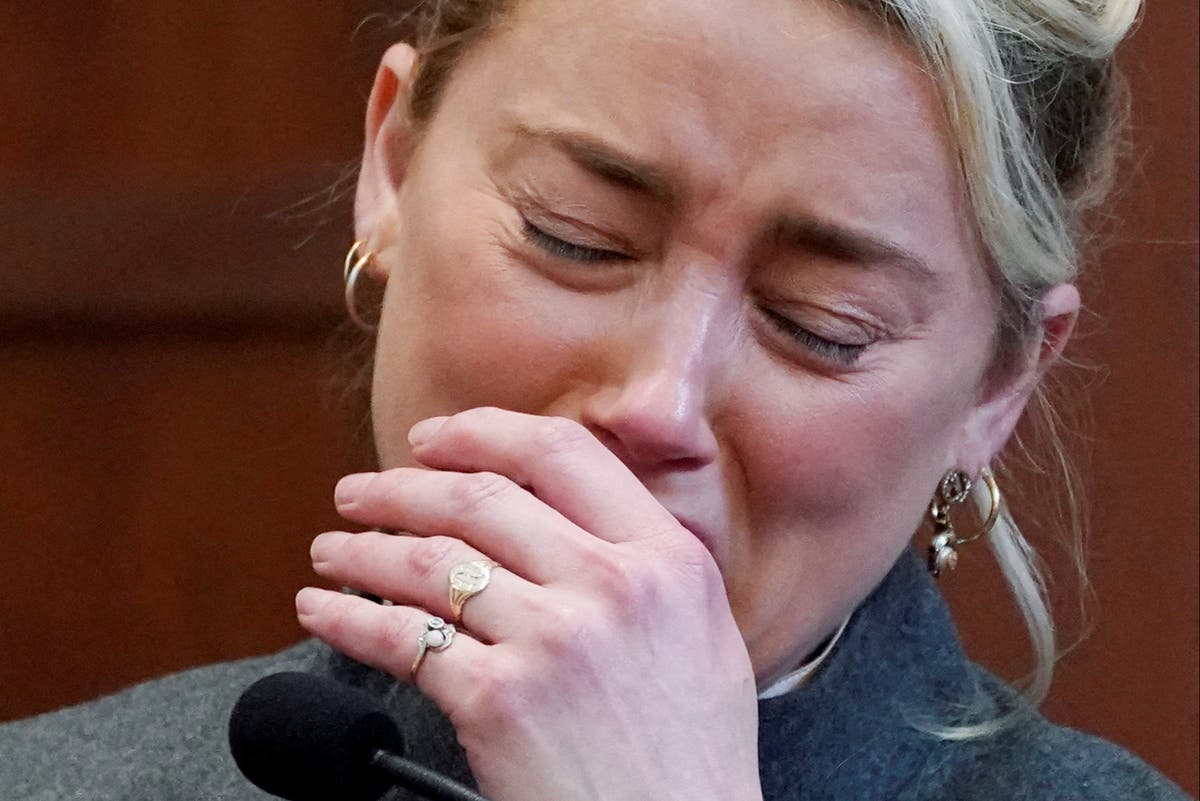 mber Heard told jurors in her defamation trial that she filed for divorce from Johnny Depp in 2016 because she worried she would not survive physical abuse by him.

Under questioning by her attorneys, Heard said she took the step after the “Pirates of the Caribbean” star threw a cellphone that hit her in the face.

The incident made her realize the marriage was “falling apart” despite her attempts to repair it, she said.

“I made the decision to file for divorce,” she added. “It was hard because I loved Johnny so much.”

Jurors were shown photos of Heard with redness and swelling on her face that she said was caused by being struck by the phone.

At this point in their marriage, “the violence was now normal and not the exception,” Heard said.

In earlier testimony, Depp said he never hit Heard or any woman and argued that she was the abuser in their relationship.

Heard earlier on Monday denied claims she left human faeces in the marital bed she shared with ex-husband Johnny Depp as their libel trial resumed.

The Aquaman actress, 36, told a Virginia courtroom that the faecal matter belonged to Mr Depp’s Yorkshire terrier Boo, saying that the dog had “eaten Johnny’s weed as a puppy and had bowel control issues for life”.

Mr Depp’s chaffeur Starling Jenkins previously told the court that Ms Heard had told him it was a “horrible practical joke gone wrong”.

Ms Heard told the court that the Pirates of the Carribbean actor, 58, had been “delusional” after finding the matter on his bed, and accused his former partner.

Instead, she suggested it was Mr Depp’s dog Boo who was responsible, denying an alleged “prank” ever took place.

Ms Heard said that Boo and their other dog, Pistol, would sleep in their bed so Boo would not have to get up in the night and possibly go to the bathroom on the floor.

She said that while packing to go away to the Coachella music festival, she left the dog in the bed, which she said appears to have been when the incident occurred.

The actress insisted she had not been “in a pranking mood” due to her relationship’s deterioration, and said the “disgusting” incident had caused Mr Depp to become violent.

During her testimony on Monday, Ms Heard’s lawyer Elaine Bredehoft asked her: “Did you commit any kind of prank?”

She responded: “Absolutely not. I don’t think that’s funny, I don’t know what grown woman does. I was also not in a pranking mood.

“My life was falling apart.

“I was at a crossroads in my life. I’d just been attacked on my 30th birthday by my violent husband, with whom I was desperately in love and who I needed to leave.

“It was not really a jovial time and I don’t think that’s funny. Period. That’s disgusting.”

The couple’s divorce was finalised in 2017 after less than two years of marriage.

Heard also told the trial on Monday that Johnny Depp slammed her against a wall and wrapped a shirt around her neck during their 2015 honeymoon on the Orient Express.

The pair married in February 2015 and took their honeymoon on the Orient Express train in July of that year after Depp finished filming the fifth “Pirates of the Caribbean” movie.

Under questioning from her lawyers, Heard said the couple argued about whether Depp should drink during the trip. She said they had a loving relationship when Depp was sober but that he often turned violent when drinking or using drugs.

In a sleeping car on the train, Heard said, Depp slapped her across the face and repeatedly slammed her body against a wall. He then took his shirt off and wrapped it around her neck, she told the jury.

“That’s how I woke up the next morning,” Heard said. “I woke up with it still around my neck and a giant knot on the back of my head.”

The “Pirates of the Caribbean” star testified earlier that he never hit Heard and argued that she was the abuser in their relationship.

Depp in his testimony said Heard at one point threw a vodka bottle that cut off the top of his right middle finger.

Heard has denied severing Depp’s finger and said she only hit him to defend herself or her sister. She told the jury in earlier testimony that Depp assaulted her by inserting a liquor bottle in her vagina while he threatened to kill her.

Mr Depp is suing his ex-wife for $50 million in a libel suit over a 2018 article she wrote in The Washington Post which his lawyers say falsely implies he physically and sexually abused her while they were together, although he is not mentioned by name in the piece.

He has denied all accusations. Ms Heard is countersuing Mr Depp for $100 million.

Heard told the court that the only person that believes that her 2018 opinion piece published in the Washington Post is about Mr Depp “ironically, is Johnny”.

“The only one who thought it was about Johnny is Johnny,” she told jurors during the US defamation trial.

“It’s about me, it’s about what happened to me after Johnny… after I escaped my marriage.

“It’s about me and my life and what I endured once I moved on with my life. The only one who made it about him, ironically, is Johnny.”

Becoming visibly emotional, she added: “I want to move on with my life… I want Johnny to move on.”

The trial at Fairfax County district court, in Virginia, continues.