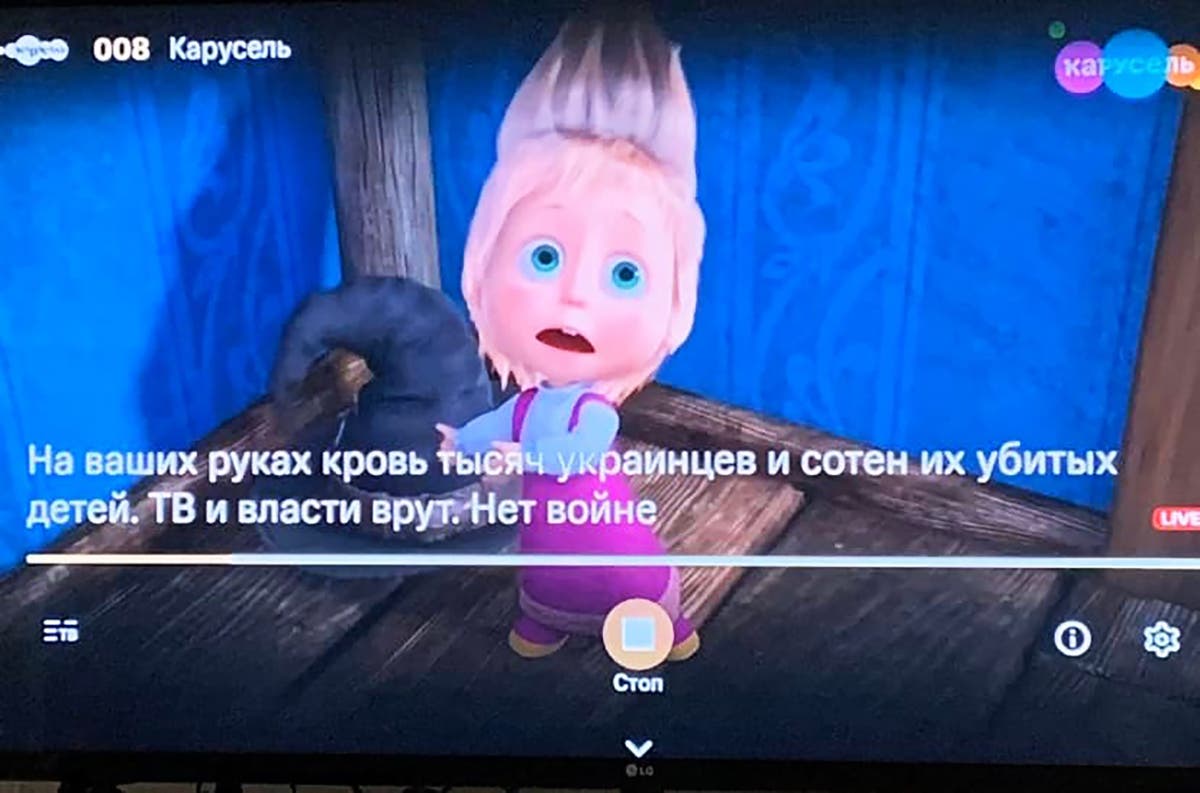 major hack of Russian TV schedules led to millions seeing a message that the blood of Ukrainians was on their hands.

The ‘No to War’ call came as Russians prepared to watch the annual Victory Day military parade on Red Square presided over by Vladimir Putin.

The air display involving his Doomsday nuclear plane was abruptly cancelled at the last minute in Moscow ostensibly because of bad weather – yet there were suspicions it was due to security reasons and the fear of attacks on aircraft.

Victory day air parades were scaled back Novosibirsk, in sunny conditions, and cancelled in Yekaterinburg, Murmansk and Samara due to “bad weather”.

A caption appeared on hacked screens saying: “The blood of thousands of Ukrainians and hundreds of their children is on your hands.

“TV and the authorities lie. No to war.”

It hit viewers all over Russia.

“The [TV] provider ‘delighted’ my child with such a message on children’s channels, and then it turned out that the same thing happened on the other channels,” said a parent in Tyumen, Siberia.

“The message appears in the description of any programme.”

“A cyberattack was carried out on Russian TV broadcasting channels, because of which subscribers could have extremist inscriptions in the broadcast grid,” said MTS in Siberia.

“Now our IT specialists are promptly eliminating the consequences of hack so that subscribers can receive services and watch TV programs and movies as quickly as possible.”

A viewer called Olga Ivanova said: “I have NTV Plus satellite TV and the same s*** is happening there on every channel.”

She said: “it is not on all MTS channels but on many for several hours.

“I switched on TV at 7am, it was already like that, switched off only at 11.”

The source of the attack in support of Ukraine was not immediately clear.

Former Russian presidential candidate Ksenia Sobchak said: “At night and in the morning, residents of Russia who wanted to watch festive TV program stumbled upon such messages.

“At least [those who use] MTS, NTV-plus, Rostelecom, and Wink.

“I wonder who exactly was hacked. Whose head will fly off his shoulders?

One source claimed: “This is a built-in player in smart TV…. there’s a Ukrainian code.

“They are being manipulated.

“In my Samsung, he has been replacing some IPTV channels with central Russian ones for a long time and is chasing Ukrainian propaganda.”

Lord Frost rejects claim he tried to ‘torpedo’ NI protocol
Eurovision: Who is Ukraine’s entry Kalush Orchestra and what is their song’s meaning?
Advertisement