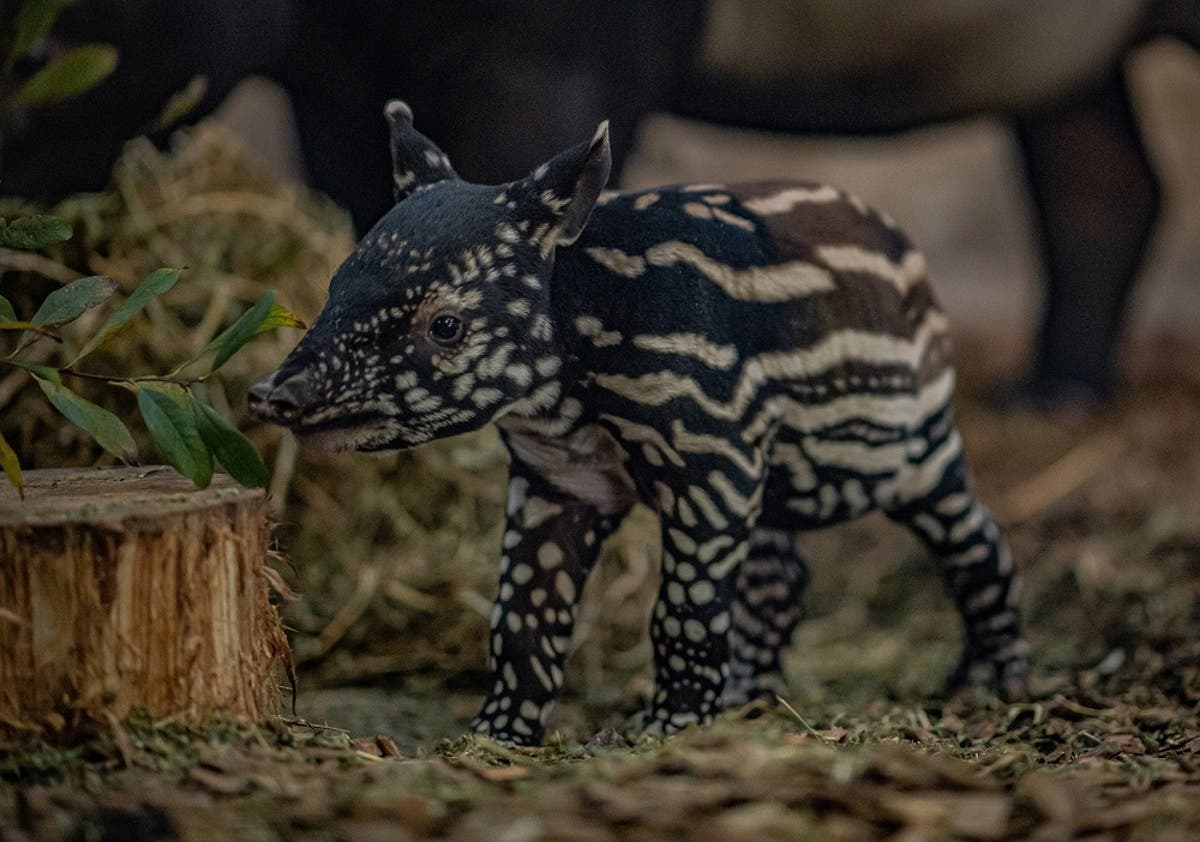 British zoo is celebrating the birth of a tiny endangered Malayin tapir.

The calf, who has been named Nessa, weighed in at just 9kg after a gruelling 13-month pregnancy for her mother Margery at Chester Zoo.

Nessa is expected to grow quickly under the care of zookeepers as the Malayin is the largest of the world’s four tapir species – related to both the horse and the rhinoceros.

There are less than 2,500 of the endangered species estimated to remain across Malaysia, Sumatra, Thailand and Myanmar.

The zoo claims more than half of the world’s Malayan tapirs have been lost in the last 40 years, with overhunting, illegal logging and deforestation blamed for the stark decline in population.

At birth, baby tapirs have distinctive coats featuring a series of spots and stripes. This patterning is to help camouflage them on the forest floor, but slowly changes over the first six months of life to mirror the unique black and white pattern of their parents.

Zoo director Mike Jordan said: “The Malayan tapir is a species under enormous pressure – its numbers have crashed over the course of the past four decades to frighteningly low levels, with hunting and habitat destruction being the main threats to its survival.

“Here at Chester Zoo we’re doing all we can to reverse that and carve out a brighter future for the species. Margery’s precious calf is a highly significant new arrival who will add valuable new genetics to the European endangered species breeding programme, which is working to ensure a safety net population of Malayan tapirs in conservation zoos like ours, guarding them from extinction.”

Rosie Owen, a keeper at the zoo, added:“It’s so lovely to once again hear the pitter-patter of tiny, spotty and stripy Malayan tapir feet. They’re really special animals; a highly endangered species, and very few zoos in the whole of Britain care for them, so it’s fair to say that Nessa’s arrival has put huge smiles on all of our faces.

“Mum Margery is ever so good with her calf. Nessa is a real bundle of energy, confident and often looking to explore, but Marge is extremely attentive and always retains a watchful eye on her. The pair of them doing really, really well together.”

What is stiff person syndrome, the condition Celine Dion suffers from?
BTS launch official pop-up store at The O2
Advertisement