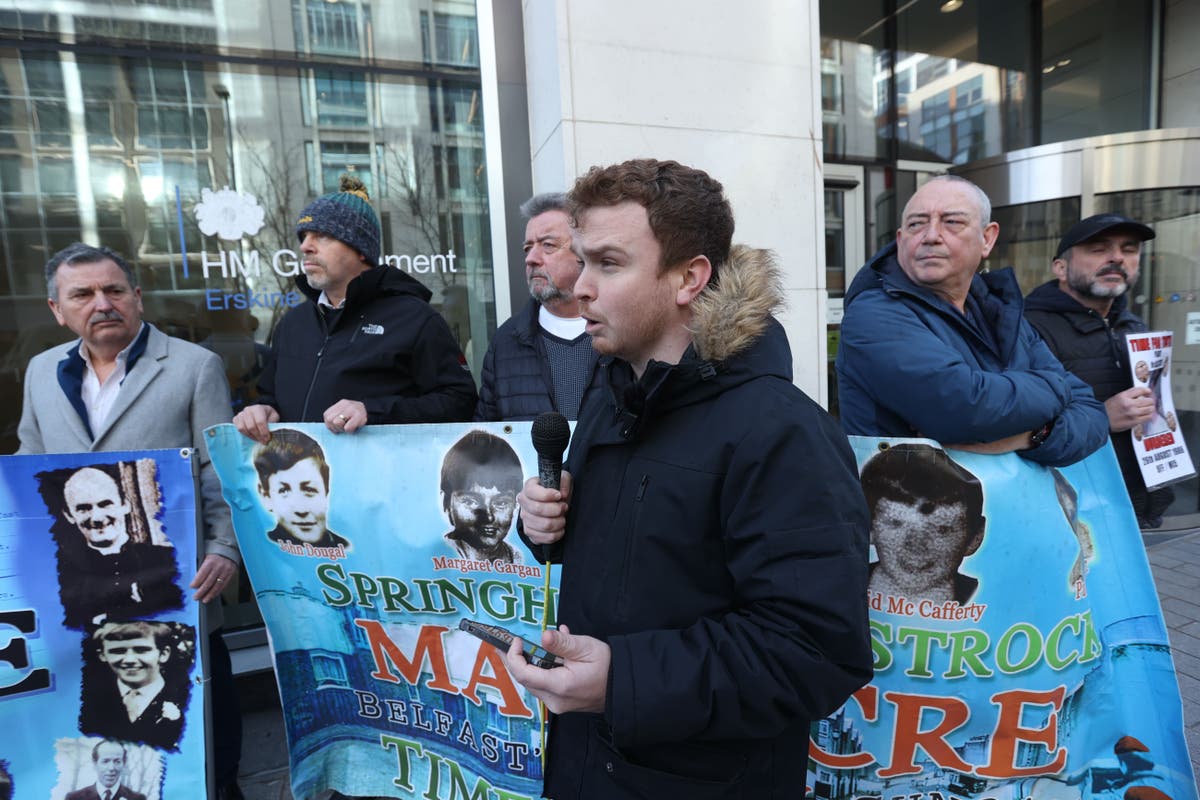 ictims and survivors of Northern Ireland’s troubled past demonstrated in Belfast as the House of Lords debated a controversial bill to deal with legacy issues.

Members of the Time for Truth committee gathered outside the Northern Ireland Office headquarters in the city centre on Wednesday afternoon for the Stand Against Britain’s Bill of Shame rally.

Ryan Murphy from north Belfast, whose grandfather Terry McCafferty was killed along with his work colleague James McCloskey by the Ulster Defence Association (UDA) in January 1974, addressed those gathered.

Mr McCafferty and Mr McCloskey had been laying electricity cables for Northern Ireland Electricity when they were targeted by the loyalist group because they were Catholics.

No one has ever been charged or convicted for the murders.

“Like all you, my family still have many unanswered questions,” Mr Murphy said.

“My grandmother Eileen sadly passed away in May this year, she went 48 years without getting answers, but it’s in her memory and for her that I am even more determined now than I was before to continue that fight for truth and justice.”

The Legacy Bill, which is going through its parliamentary stages, would see a form of immunity offered to those suspected of killings during the conflict if they agree to co-operate with a new truth recovery body.

It would also prohibit future civil cases and inquests related to Troubles crimes.

It has been almost universally opposed by parties across the political divide as well as all victims groups.

As peers in the House of Lords turned their attention to the bill, Mr Murphy said he was thinking of all the families who lost a loved one and have campaigned for decades for truth and justices.

“Families who will now see the British government pull down the shutters on their campaign with this legacy bill,” he said.

“Today we stand in solidarity together with families and friends in Derry and in London.”

Mr Murphy claimed the bill is designed to “prioritise the demands of the British military lobby above the voice of victims”.

“It represents a full frontal assault on the basic legal process and administration of justice,” he said.

“It’s frankly insulting that this Tory government should seek to legislate to deny any family their right to an investigation in line with human rights law, or an inquest or a public inquiry, but that’s their very clear intention.

“This bill is unworkable, it will not deliver for victims and survivors, it’s in breach of the Good Friday Agreement and it’s incompatible with international human rights obligations.”