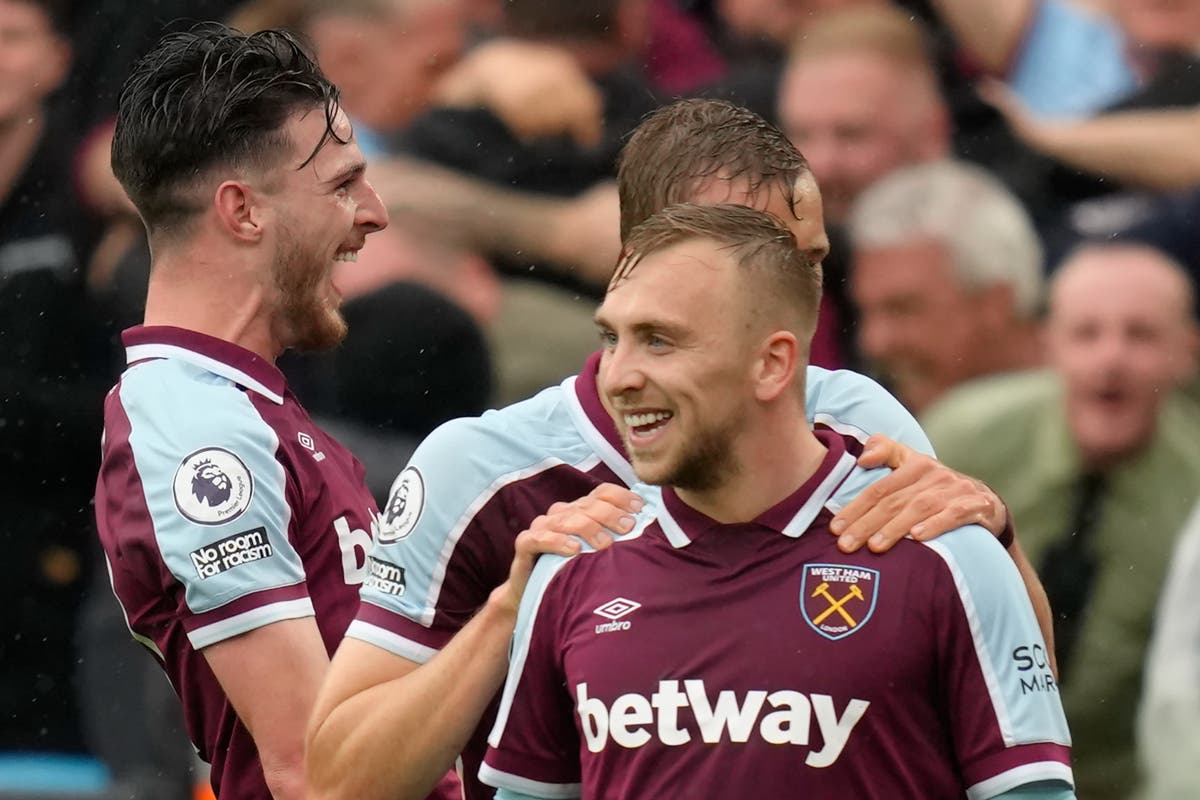 hree-eighths of the Premier League’s Player of the Season shortlist were on show at the London Stadium yesterday afternoon, but it was West Ham’s sole representative, Jarrod Bowen, who shone the brightest.

Brighter than Joao Cancelo, the least culpable of an unsure Manchester City back four that could not deal with the winger’s runs from deep, and brighter even than Kevin De Bruyne, fresh from his four-goal masterclass at Wolves in midweek.

Bowen scored twice in a first half in which the Hammers’ sit-soak-and-counter strategy worked to perfection, racing clear on both occasions, rounding Ederson and finishing from a tight angle for the first, then reversing cleverly back past the Brazilian goalkeeper for the second.

“We knew before the game we’d be able to get in behind by timing our runs, that’s one of the things that we worked on,” Bowen said afterwards, as the home side exploited a defence that paired 37-year-old Fernandinho with Aymeric Laporte at centre-back, both dogged by fitness concerns. “Then it was about me keeping my cool in front of goal.”

He certainly did that, taking his tally to 12 in the Premier League this season, and 18 in all competitions, together with 13 assists.

Jack Grealish’s volley and a Vladimir Coufal own goal ultimately cancelled out Bowen’s brace, but Lukasz Fabianski saved Riyad Mahrez’s penalty to keep some sense of jeopardy in the title race heading to the final day, when City must beat Wolves at home to be certain of retaining their crown.

At full-time, attention turned back to Mark Noble’s send-off, the retiring West Ham captain set to enjoy a summer break with the family before making any firm decision over his future role. But Bowen must surely have his own holiday plans on hold in anticipation of a first England call-up when Gareth Southgate names his latest squad this month.

“Jarrod Bowen at the moment is doing as well as anyone in England,” said Hammers boss David Moyes. “His form, his goals, have been excellent. His two goals were fabulous.”

With the obvious exception of at right-back, Bowen’s position was probably the one where Southgate had most competition heading into this season, but Marcus Rashford and Jadon Sancho have endured difficult campaigns at Manchester United, while Grealish’s deflected effort yesterday was just his third in the League since his £100million arrival from Aston Villa last summer.

Raheem Sterling is a mainstay and there is the small matter of Bukayo Saka and Phil Foden to contend with as well, but a ridiculous schedule of four Nations League matches in 10 June days at the end of a long campaign means this is an international “break” in which a call-up will surely amount to a decent chunk of playing time, too.

It will not have been lost on Southgate either that Bowen’s goals were the kind Heung-min Son scores on repeat for Tottenham in tandem with Three Lions skipper Harry Kane, with Michail Antonio and Pablo Fornals taking a turn each in the latter’s role, flipping a perfect ball in behind from deep.

A point, coupled with Wolves’ draw against Norwich, secured European football for West Ham next season, with Moyes once again talking of the need to kick on in the transfer market between now and then.

He will do well to make as shrewd an acquisition as Bowen, who arrived for what now looks a bargain £22million from Championship Hull only a month into the Scot’s second spell in charge. But it is that kind of recruitment the Hammers must seek to replicate this summer, and the progress Bowen has made may make it easier to do so.

“It’s a big part [of signing players],” said Moyes. “When you tell players you want to take them, especially from the lower leagues, you want to say, ‘Look, I want to try to turn you into an international player, I want to improve you, I want to make you better’. Hopefully, Jarrod does fit into that category in the future.”

He surely will — and sooner rather than later.