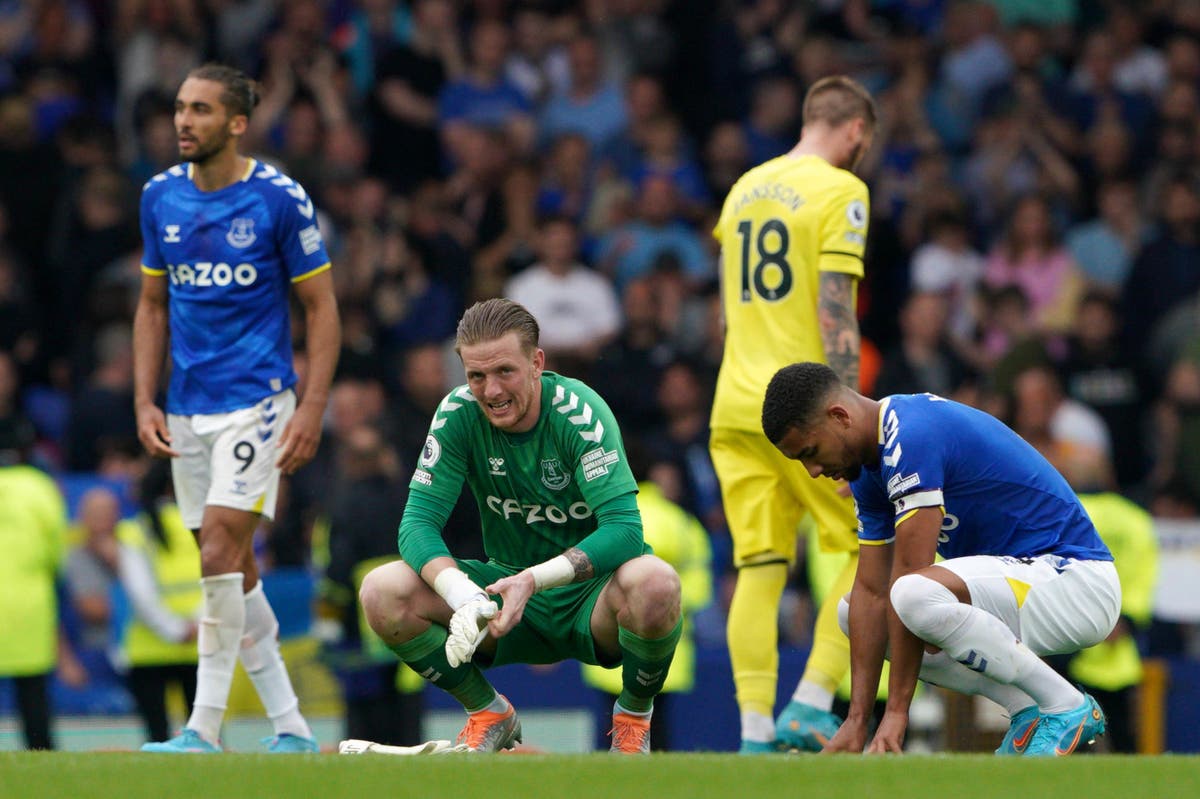 Victory for the Toffees would have been enough to seal their top-flight status next season, and it was a confident start as Dominic Calvert-Lewin marked his first start in five weeks with a 10th-minute opener.

But, in keeping with Everton’s season, things were not going to be that simple – Jarrad Branthwaite was sent off for a foul on Ivan Toney eight minutes later, and Brentford levelled through a Seamus Coleman own goal.

Though Richarlison restored Everton’s lead just before the break, the pressure told in the second half as two goals in three minutes from Yoane Wissa and Rico Henry gave Brentford victory and moved them up to 11th in the table.

Everton’s misery was compounded by a late red card for substitute Salomon Rondon.

It had felt so different at the start. There were less than three minutes gone when Calvert-Lewin flicked the ball on, Anthony Gordon broke through and, when his shot was saved, Richarlison headed just wide.

When Gordon won a free-kick on the right, the academy product whipped in a low ball which found its way into the far corner of the net via a combination of Richarlison and Calvert-Lewin.

The roof almost came off the stadium but the mood changed eight minutes later.

Richarlison was appealing for a penalty for handball but Brentford pumped the ball long for Toney to run at goal. He got goal side of Branthwaite, who clipped his heels to earn a red card and give Brentford a free-kick that Christian Eriksen fired narrowly wide.

Mathias Jensen fired just wide after Andre Gomes fluffed a clearance but the pressure soon told – Wissa pinged in a cross and captain Coleman inadvertently turned the ball into his own net.

It threatened to unravel for Everton there and then as Bryan Mbeumo tested Jordan Pickford from range, but Richarlison is always a threat in any situation, and the Brazilian turned things around for his side again.

He barged his way into the box, was brought down by a combination of Mads Bech Sorensen and Kristoffer Ajer, and picked himself up to convert the penalty in first-half stoppage time.

Everton dropped deeper to defend after the break but Brentford soon found the gaps.

Toney could not get out of the way of a Jensen shot, taking a painful blow to the face for his troubles. Pickford then awkwardly punched an Eriksen free-kick into a crowd, grateful to see Iwobi hook it clear.

The pressure was telling. Vitalii Mykolenko squared up to Toney and appeared to thrust his head towards him, but Michael Oliver was content to give both players a talking to.

That was perhaps a let-off for Everton, but greater punishment was coming. Brentford levelled in the 62nd minute with Wissa meeting Eriksen’s corner at the near post to head home.

Everton fans were barely done venting their frustration at the poor marking when they saw worse – Henry getting free of Gordon to meet Christian Norgaard’s deep ball and power a header inside the far post, leaving Everton to look to their final fixtures against Crystal Palace and Arsenal for salvation.

They will be without Rondon though, as he flew in on Henry in the final minutes and his apologetic response was not enough for him to avoid a red card.