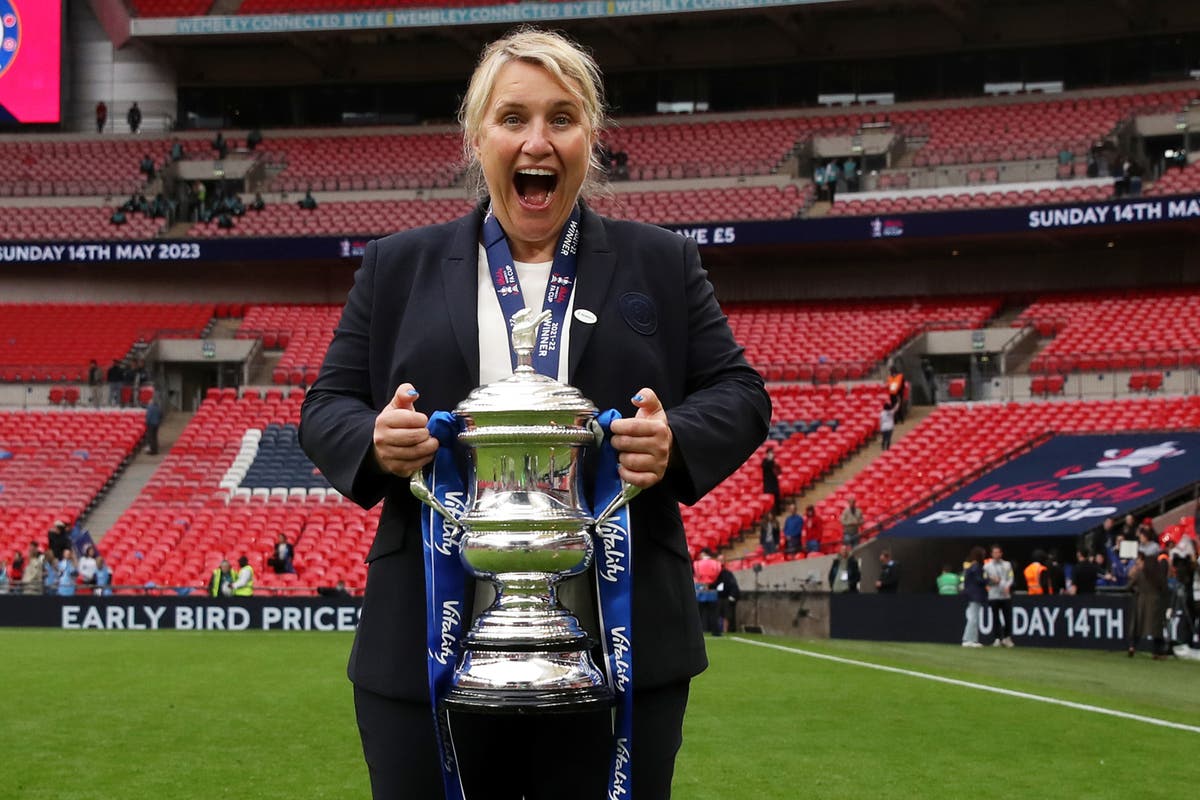 The Blues secured a domestic double as they triumphed 3-2 in extra-time at the end of a see-saw encounter in front of a crowd of 49,094 at Wembley – a competition record.

But Kerr struck again midway through the first additional period as the Blues continued their dominance of the English game after successfully defending their Women’s Super League (WSL) crown on the final day last weekend.

“Honestly, those women, they will go down in history,” Hayes said. “I will look back in 10 years’ time and I’ll be thinking that group is immense. It’s the best team I’ve ever coached.

“I totally understand that we always want to talk about perfection in football but having been on the winning side more often than not, let me tell you it’s about human endeavour. And we have a group of people who do exactly what we said. They are not going to be on the losing team, they’ll find a way.”

It was Kerr whose brilliant double on the final day of the WSL season a week earlier helped the Blues to come from behind to beat Manchester United and pip Arsenal to the title by a single point.

The Australian also scored twice at Wembley in last season’s delayed FA Cup Final win over the Gunners and Hayes was once again left to laud her star forward.

“To find the winning goal was so gutsy,” she added. “I always felt give Sam one chance, just one chance. There was a moment in the game I thought she was knackered but she just digs and digs and digs. We’ve got an amazing centre-forward.”

Hayes has now spent a decade in charge at Chelsea, winning four FA Cups in total along with five league titles and two League Cups.

There has been speculation that Hayes, who has in the past been linked with jobs in the men’s game, could decide to walk away, with little left to achieve beyond a maiden Champions League success, which looks a tall order given Barcelona’s supremacy.

But when quizzed over here future at full-time at Wembley, Hayes said: “Everyone knows I’ve got a contract at Chelsea, so what’s the speculation about?

“Maybe there’s a job that you guys are telling me I’m going for that I don’t know about. But as far as I’m concerned, I don’t have to kill any speculation. I’m under contract at Chelsea and there’s nothing to talk about.

“I can’t bear losing – I can’t bear the thought of it. I don’t want to think about it, losing fuels me. The minute I feel any of them coming close, I just want to get better.”