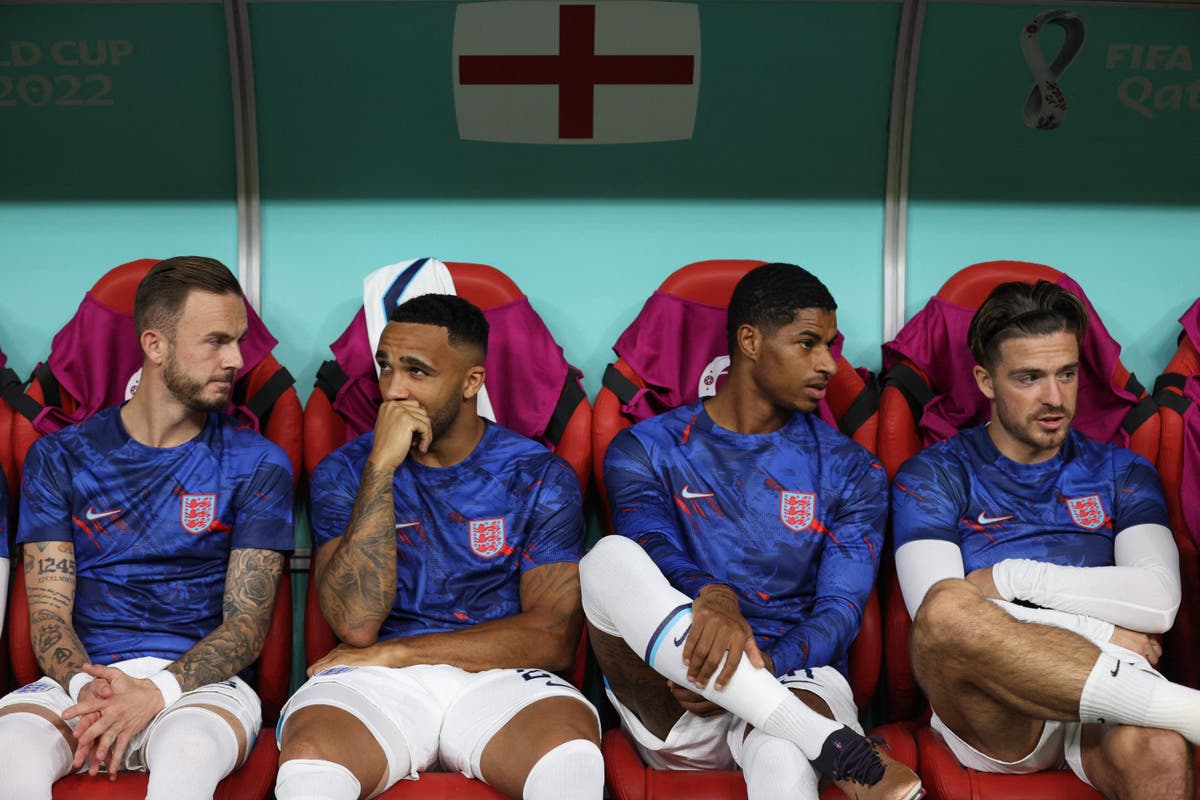 Southgate’s ability to change the course of matches which are going against his side remains one of the remaining questions about the England manager ahead of the World Cup quarter-final against holders France.

In both of England’s near-misses, the semi-final defeat four years ago and the loss to Italy in the final of Euro 2020, Southgate appeared unable to affect the games when they began slipping away.

The two matches actually followed a similar pattern, with England sitting back on an early lead before conceding on the hour-mark and struggling to regain a foothold against opponents who were simply better at looking after the ball. Croatia scored an extra-time winner, Italy eventually won on penalties.

Four years ago, in particular, Southgate was slow to make a move.

As Croatia’s pass-masters, Luka Modric, Ivan Rakitic and Marcelo Brozovic, took a stranglehold on the game, England were reduced to hopeful punts upfield, but Southgate did not make a substitution until the introduction of forward Marcus Rashford for Raheem Sterling with 15 minutes of the 90 remaining. England were screaming out for an extra body to bolster their over-run midfield, but the manager did not tweak his system or make a change in the middle until Eric Dier replaced Jordan Henderson in the 97th minute.

Against Italy, England were more in the game but, again, Southgate did not introduce tournament talisman Jack Grealish until the 99th minute, and the only midfield change he made was enforced, after a Declan Rice injury, as Jorginho and Marco Verratti kept the ball.

Here, there have been warning signs of history repeating itself. England were outnumbered in the middle during the draw with the USA, as the opposition’s midfield three pressed Jude Bellingham out of the game. Southgate introduced Henderson for the teenager but, arguably, it was a game where England could have done with both alongside Rice to match the USA, while Phil Foden was strangely overlooked from the bench.

In the next fixture, however, Southgate offered proof that he can change matches with tactical tweaks, transforming the final group game against Wales at half-time. After a turgid first 45 minutes, the manager swapped flanks with wingers Foden and Rashford. Within six minutes of the restart, England were 2-0 up, with Rashford and Foden the scorers.

Southgate rates tomorrow’s game as “50-50”, so the ability of both managers to use their bench or change their approach mid-game could be decisive, and France coach Didier Deschamps has a more encouraging track record in this area.

In the last-16 of the Euros, for example, with France trailing 1-0 to Switzerland, Deschamps ripped up his back-three at the interval and switched to a four-man defence. France raced into a 3-1 lead before, admittedly, being pegged back by two late goals and eventually losing on penalties.

In defence of Southgate, he did not exactly have a wealth of options in reserve against Croatia, but tomorrow he will have no excuse for inaction.

If England need a goal, Grealish, James Maddison, Sterling, Rashford or even Trent Alexander-Arnold are all likely to be in reserve. If they need more midfield control, Kalvin Phillips or Mason Mount can come on.

In comparison, Deschamps’s squad is threadbare after the loss of no fewer than six big names to injury.

There is a certain irony that Southgate has all the options, but it is still unclear if he knows how to use them, while Deschamps has proven capable of using his bench but will have few game-changers on it.