Viewers of Channel 4’s 24 Hours in A&E have been left blown away after a doctor treated a swollen stoma by pouring sugar onto it.

The programme, which was on air last night, followed colorectal registrar Dr Charlie at Queen’s Medical Centre in Nottingham as she dealt with Callum, 21, who had a prolapsed stoma.

She poured sugar across the exposed and inflamed bowel in an effort to treat it, explaining: ‘Anyone that’s ever put salt on a slug and watched it shrivel up – the same kind of thing happens so the sugar draws fluid towards itself so you get a slightly smaller stoma. Sometimes that’s just enough to mean that you can get it back in.’

Many of those watching the programme were left wowed by the unusual method, with one saying: ‘One of the reasons I love #24hrsAE so much is because it’s so educational. Who knew that sugar can be used to shrink a prolapsed stoma?

‘I never knew a stoma prolapsed in the first place. Every day is a school day.’

Another commented: ‘Sugar-on-stoma is blowing my mind.’

Appearing on the show, Callum had entered resus – and it wasn’t his first time in hospital, after he was stabbed outside a nightclub in May 2019.

Lou, the nurse in charge, explained: ‘He was a patient here a few years ago. He had a stab wound to his abdomen.

‘So around the umbilical area, just one stab wound.’ The programme, which was on air last night, followed colorectal registrar Dr Charlie at Queen’s Medical Centre in Nottingham as she dealt with Callum, 21, who had a prolapsed stoma

What is an Ostomy pouch?

An Ostomy pouch is fitted as a result of a bowel disease.

Bodily waste is rerouted from its usual path because of malfunctioning parts of the urinary or digestive system.

It passes to a surgically created stoma on the abdomen into a prosthetic known as a ‘pouch’ or ‘ostomy bag’ on the outside of the body.

An ostomy can be temporary or permanent.

He was taken to theatre ‘very quickly’ because of the severity of his injury.

‘In A&E you tend to hear about the unusual cases, so people who receive terrible injuries or had a rocky road to recovery.

‘Callum was one of those you heard about. A stoma is a life-altering thing anyway.

‘You end up with it overnight, and psychologically that can be difficult.’

Recalling the story, Callum said the assailant had ‘stabbed five people that night’ and he ‘tried to get him to put the knife down.’

The assailant was sentenced to 12 years in prison, while Callum was left with a stoma.

He said: ‘It’s ruined my life for good now. Can’t run or do anything now.’

Arriving in the hospital, the 21-year-old was in visible pain, with some of his bowel exposed due to a problem with his stoma.

Colorectal registrar Dr Charlie was called in to assess his condition after Callum revealed he had been having pains since the night before. Many of those watching were left stunned over the treatment, which Dr Charlie compared to ‘pouring salt onto a slug’

She explained: ‘What you’ve got is a prolapsed stoma, so the stuff that’s usually on the inside is on the outside.

‘A stoma is a general term where we’ve rerouted your bowel to your abdominal wall and you pass your waste into a bag.

‘It’s essentially fashioning a new bottom for you.’

‘If a stoma has prolapsed completely and starts to change colour and texture then you’ve got hours rather than days to replace that so you can preserve the bowel.’ She told him: ‘The more it swells, the harder it is to get back in.

‘We’re not going to try to shove it back in straight away, because that won’t work and it will be uncomfortable for you, but what I need to do is make it shrink.

‘We do that with sugar, this is normal cafe sugar.’

After pouring the sugar onto the stoma, she told him there would be some lifting and ‘manipulation’ to get the bowel back in.

She told him: ‘The closure of your stoma looks good, it’s just whether we can get it back into your belly. It’s entirely possible we might have to make you a new stoma.’

She said: ‘If you lose blood supply to this bit of bowel that’s now on the outside when it shouldn’t be, that will now die off and dead bowel on the inside or outside will rapidly make someone septic and unwell. 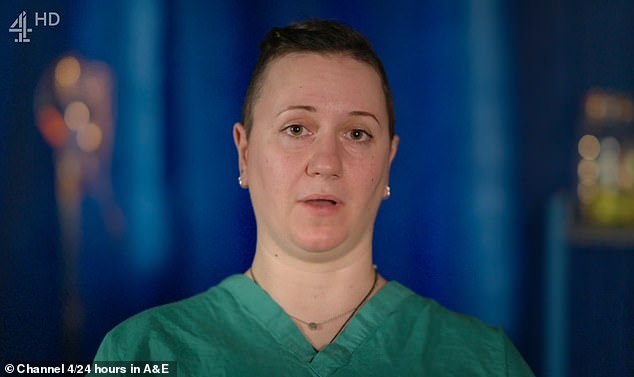 Charlie explained the more the stoma swelled up, the harder it would be to put back into Callum’s body

‘It can be life altering and life-taking.’

‘The best thing for the patient is the treatment that fixes the problem in the least traumatic way possible.’

Callum said the pain was so bad that he was physically sick.’

Charlie told him: ‘It’s shrunk a little bit, but I don’t think it’s shrunk enough that it’s going to go back in. I think you need to go to theatre and refashion that.’

She began preparing him for emergency surgery, with Callum nervously asking her: ‘I can’t die can I?’

She replied: ‘Anyone can die at any time. But you and I have equal chances right now. I do think this is a problem we need addressing.’

Lou said: ‘On the occasions I’ve met Callum, it’s because he’s had problems related to his original injury. To stab someone else – what are you hoping to achieve? Do you want to kill someone? I don’t know.’

He was in surgery for two hours, with surgeons having to remove more of his bowel – but he ended up recovering well at home.