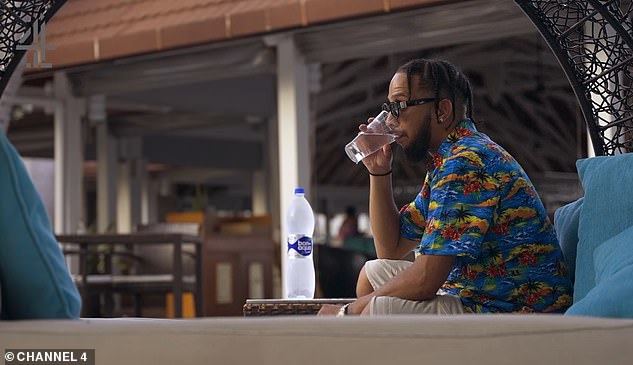 Adidas has been accused of ‘greenwashing’ after Channel 4 Dispatches revealed how its ‘ocean plastic’ trainers are made from throwaway bottles found on land in the Maldives that are sent around the world to be made into shoes in Taiwan.

The German-based retailer sells a range of shoes and clothing in collaboration with environmental group Parley for the Oceans that uses what it describes in its promotional material as ‘ocean plastic’.

The project, based in the Maldives, produces trainers starting from £75 and £63 zip-up tops.

In Dispatches: The Truth about Nike and Adidas, which airs tonight at 8.30pm, presenter Darcy Thomas travels to the Maldives to assess the ecological impact of the trainer industry and discovers the plastic used in the adidas designs is found on beaches and collected from coastal communities.

It is also sourced from a luxury resort which hands out bottles liberally to guests, despite pledging to go plastic free.

Adidas has been accused of ‘greenwashing’ after Channel 4 Dispatches revealed how its ‘ocean plastic’ trainers are made from throwaway bottles found on land in the Maldives that are sent around the world to be made into shoes in Taiwan. Above, a man drinks a water bottle in a Maldives resort 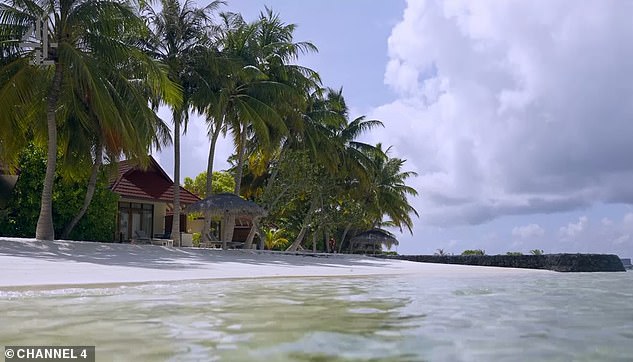 The German-based retailer sells a range of shoes and clothing in collaboration with environmental group Parley for the Oceans that uses what it describes in its promotional material as ‘ocean plastic’. It is based in the Maldives (pictured)

The resort is owned by the owners of the Maldives’ main bottling company.

He said that, while there is a need to collect plastic on land, it was wrong to call it ‘ocean plastic’.

He said: ‘It’s a bit of a greenwashing element in there because you’re saying it’s ocean plastic, and for a layman, that essentially means it comes from the ocean.’

He added: ‘They need to make sure that they’re not branding themselves as collecting ocean plastic, but actually collecting a lot of the plastic from land’ and that ‘there is a lot of plastic in the ocean in the Maldives… they need to do their part to collect those as well.’

Mr Ismail also criticised Adidas for sourcing its ‘ocean plastic’ from a resort that is linked to a major plastic producer. 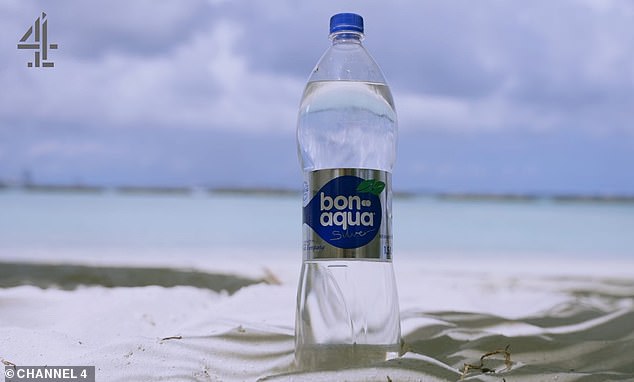 In Dispatches: The Truth about Nike and Adidas, which airs tonight at 8.30pm, presenter Darcy Thomas travels to the Maldives to assess the ecological impact of the trainer industry and discovers the plastic used in the adidas designs is found on beaches and collected from coastal communities. Above, a water bottle on a beach in the Maldives

He said the brand ‘needs to do checks and balances to see whether they are actually helping the producers of the problem or the actual creators of the problem to mask themselves as part of the solution’.

In its promotional material, adidas claims to be the ‘solution to help end plastic waste’ through its project with Parley that involves ‘intercepting plastic waste on beaches, coastal communities and shorelines, preventing it from polluting our oceans’.

Promotional material shows teams collecting waste plastic from polluted beaches, with Parley then sorting the ‘ocean plastic’ and sending some of it 4,000 miles away to Taiwan to be made into Adidas goods.

Trainers sent to landfill may take 1,000 years to degrade.

According to Nike’s UK website, any participating Nike store will accept old trainers which will be ground up and used to make products such as playgrounds and basketball court surfaces, as well as new Nike products.

Dispatches tried to recycle trainers through the Nike Grind scheme but found that despite being promoted on the UK website it is no longer in operation in any store in the UK.

Reporter Darcy Thomas was told by a manager at Nike’s flagship store in Oxford Circus that if he left his shoes at the branch, they would be thrown away.

Dispatches also shows that even though Nike promotes the Nike Grind initiative as a home for old shoes, it also concedes on its website that ‘Nike Grind materials are largely composed of post-industrial manufacturing scrap.’

Speaking to Dispatches, Sylvia Rook of Chartered Trading Standards said: ‘If it’s on the UK website, then UK consumers will think it applies to them and that might affect their buying decision because they’ll think we’re going to choose a company which is more environmentally friendly…This highlights how important it is for businesses to take things off their website if it’s out of date to ensure that people aren’t misled.’

After it was contacted by Dispatches, Nike quickly changed its UK website to clarify Nike Grind is now offered only in the EU.

It said: ‘Our Recycling and Donation program is currently available in 78 stores in Europe, and we’re working to drive further scale…

‘The program is not currently available in the UK due to cross-border trade complexities that limit our ability to move product to our main recycling and sorting facility in the EU.’

Despite prominently marketing it as ‘ocean plastic’, a pdf buried on Adidas website concedes that it isn’t actually from the ocean at all.

The document states ‘Are Parley products made from plastic that comes from the ocean? No.’

It says the plastic is ‘intercepted from beaches and coastal communities before it reaches the oceans’.

Parley is up front about the source of the plastic – it says much of it is waste supplied by tourist resorts, which it terms ‘collaborators’.

Dispatches reporter Thomas discovered how the project is linked to a resort in the Maldives whose owners also own one of the Maldives’ leading drinks bottling plants, the Male Aerated Water Company. The plant produces Bonaqua water in both glass and plastic bottles.

Despite claiming in 2020 that it wanted to go plastic free by 2021, the Kurumba Resort was still giving guests plastic Bonaqua bottles in April 2022.

They are offered on the shuttle boat which takes guests to the resort; left in rooms and are available at the resort’s bars and restaurants

Maldives’ Minister of Environment, Climate Change and Technology, Aminath Shauna, questioned the efficacy of schemes like the Adidas recycling programme.

When asked if she thought Adidas’ trainers were the answer to the country’s plastic problem, she said: ‘No. The solution for us to eliminate plastics from our country is to reduce our dependence on it.

‘A lot of the products that big brands and private sector are coming up with, once it’s recycled once, what happens after that product needs to be put in the garbage?’

The findings of the programme were also presented to Sylvia Rook of the UK’s Chartered Trading Standards Institute.

She said that ‘if you say that something was made from ocean plastic, then you should explain very clearly what that means so that nobody can be misled’.

Reviewing Adidas’s Paley for the Oceans marketing video, she said: ‘In this particular instance, if people think they’re getting something that’s been reclaimed from the sea and it hasn’t, then that starts to be misleading and could breach legislation.’

And while Adidas marketing states that their trainers are made ‘with Parley Ocean plastic’ Dispatches also shows that less than 20 per cent of the upper part of a Parley shoe is Parley Ocean Plastic.

Sylvia commented: ‘On the box, it should say, made from 20 percent recycled plastics or something along those lines.’

She added: ‘The great British public are very, very keen on saving the planet and buying things that are kinder to the environment and that’s why it’s important any claim is accurate because otherwise somebody’s getting business because of a claim that’s not true.

‘And if they’re completely false claims, then that actually can be a criminal offence’.

Adidas said it clearly explains what Parley Ocean Plastic is on its website, relevant product pages and stores.

It added: ‘The use of recycled materials at Adidas is far more than our products made with Parley, more than 90 per cent of the polyester used in our entire product range is recycled polyester.

‘We don’t talk about this being ‘the solution’, in fact we actively say it is only a first step. This is clear across our website and through our marketing’.

‘Complete information…is available in our online store, blogs, group website, retail destinations and, where possible, on the product or packaging.’

Meanwhile Kurumba Resort said they provided plastic bottles on the speedboat for ‘convenience and safety’.

It explained: ‘Kurumba is committed to reducing the use of plastics and the recycling of plastic containers where used and has been working with Parley for a number of years to ensure the proper disposal of its plastic waste…

‘While the resort produces its own glass bottled tap water which is available to all guests, some guests request branded mineral waters, and this is made available as a matter of customer choice…

‘The resort ensures that all plastic bottles consumed on the property are collected and properly recycled through Parley’s programme.’

The Truth about Nike and Adidas – Dispatches airs this Monday at 8.30pm