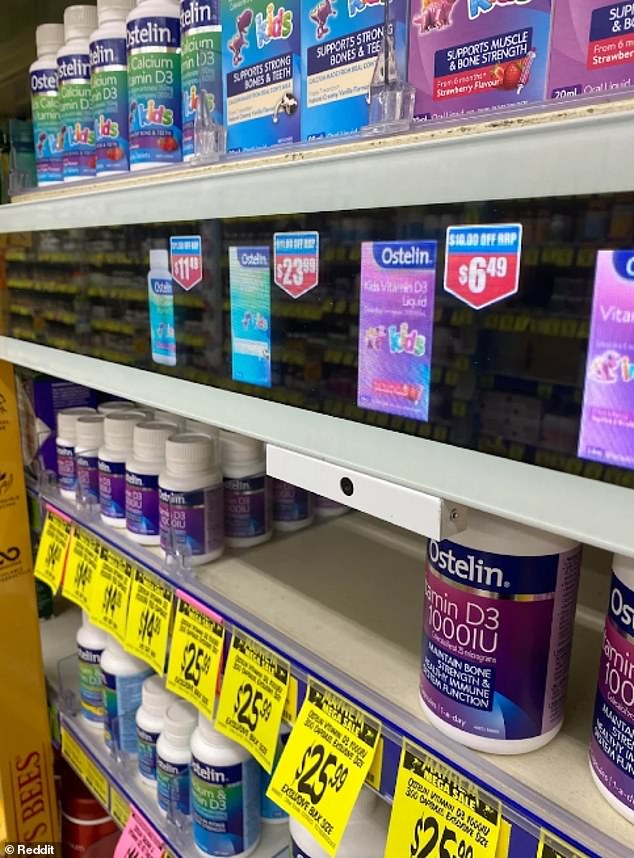 Shoppers left ‘bewildered’ over strange new in-store detail at Chemist Warehouse – but is all as it seems?

A furious Chemist Warehouse shopper has slammed the major retailer for spying on their customers after finding ‘a security camera’ hidden among the shelves of goods.

The Brisbane-based customer took to Reddit to show off his discover, sharing a photo of the ‘micro camera’ hid amongst the vitamins.

Dozens of would-be customers were divided over the so-called surveillance.

The Brisbane-based customer took to Reddit to show off his discover, sharing a photo of the ‘micro camera’ hid amongst the vitamins but others claimed he was seeing things

‘Well I won’t be shopping there now, what a joke, nanny-state,’ one man commented.

But others said they would understand if stores had to increase security.

‘The cost of living is soaring, these guys already get robbed a lot,’ one man said.

‘People are only getting more desperate and every Chemist Warehouse I have ever been to has huge shelves.

‘Staff can’t watch every aisle and there’s no way normal cameras can either,’ he finished.

But eagle-eyed followers and staff of thee big chain store said there is a ‘much simpler’ explanation to the ‘camera’.

‘I’m just trying to think of any other possible answers because a camera sitting at that level could cause some big privacy issues.’

This was later confirmed by a man who worked at the store.

‘I can confirm they are just motion sensors for the LCD screens. I work at Chemist Warehouse, nothing to see here,’ said another.

Others suggested the sensors help with electricity, only playing advertisements when people are in range of the signs.

In 2018 the retailer revealed they planned to roll-out motion sensors to help generate data around customer’s shopping habits.