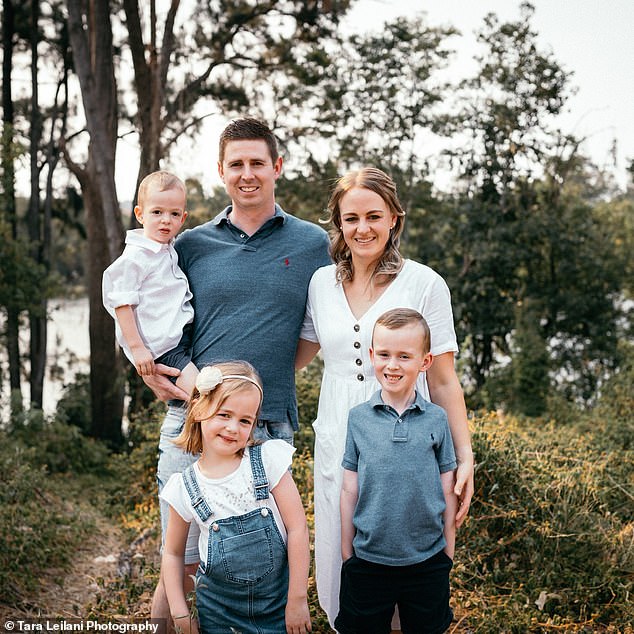 Emma McKeown was feeling her fittest and healthiest while juggling a busy work-life balance before receiving a shock breast cancer diagnosis in January 2020.

While breastfeeding, the mum-of-three from Sydney was always told to ‘walk her fingers across her breasts regularly’ to check for lumps or signs of blocked milk ducts.

On one occasion before going into the shower, Emma, now 36, noticed a lump on top of her left breast just above the nipple.

‘It was right before Christmas in 2019, we had family coming over from Singapore and Melbourne, and I waited to tell my husband because it was such a hectic time,’ she told Daily Mail Australia.

The tiny sinister lump was only 1cm wide and didn’t hurt when it was touched. 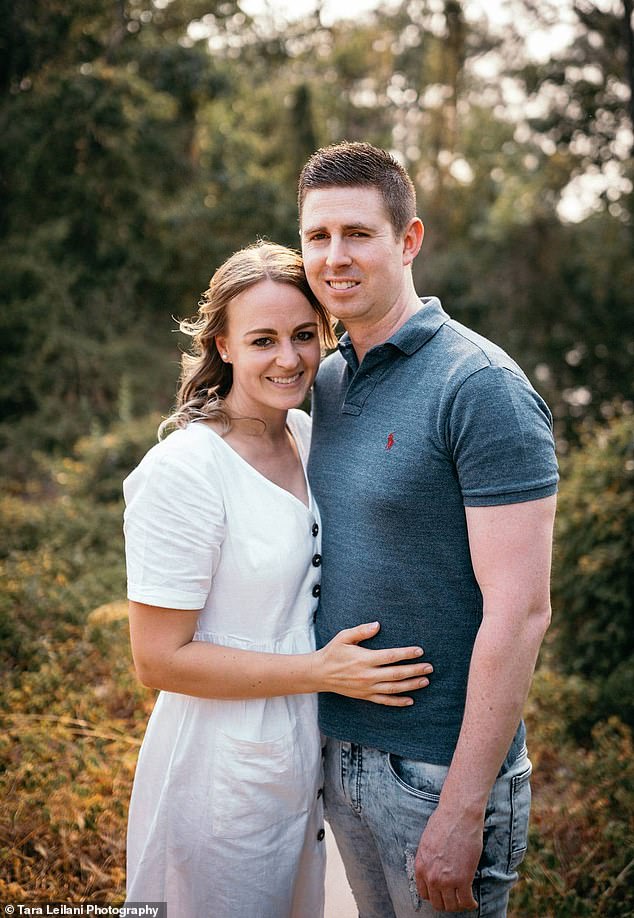 After telling her husband, Wade, Emma went to the GP who didn’t seem to concerned then went to have an ultrasound on her breast.

‘While I was there the sonographer asked if I’d been punched or hit in the boob recently, and I told her I have three kids so I wasn’t sure,’ Emma said.

She wasn’t feeling too worried until the sonographer asked to call in the doctor to ‘check’ the images.

During the appointment another smaller lump was found and later an MRI detected a third.

‘All I thought was “it’s definitely cancer now”,’ Emma said, though this was unconfirmed at the time.

‘The doctor said: “I don’t like the look of it, I’m sending you for a mammogram straight away which will determine if we need to do a biopsy” and I thought “oh my gosh!!”‘

While in the waiting room Emma called her husband who helped soothe her anxiety, before she went in for the mammogram.

A few days later she had three needle biopsies and three core biopsies done on the lumps, which felt ‘so painful’.

Emma had to wait over the weekend for the results which felt like the ‘longest’ two days of her life.

‘I was sure it was going to be bad news and my doctor, who is around my age, had to deliver the news that it was breast cancer,’ she said.

Wade accompanied Emma to the appointment, and she said it was the first time she had seen him cry.

‘We just wept together in the doctor’s office and we couldn’t believe what was happening,’ she said. 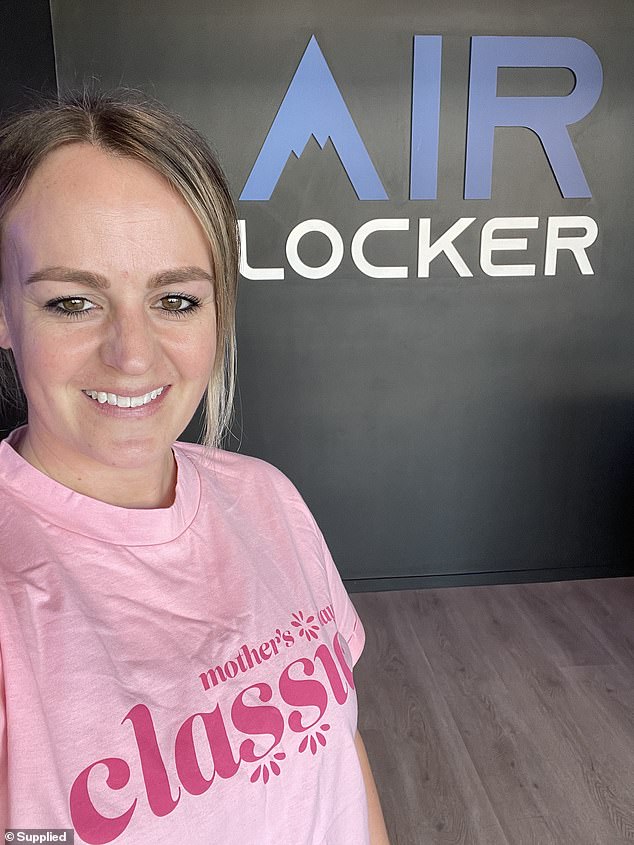 Emma found a lump on her left breast while doing a routine breast check. Thankfully she only needed surgery rather than chemotherapy and radiotherapy as the cancer hadn’t spread

Emma was later diagnosed with stage 2 breast cancer on January 14, 2020.

She doesn’t have any family history of cancer, though her grandmother was diagnosed at a similar time.

Thankfully she only needed surgery rather than chemotherapy and radiotherapy as the cancer hadn’t spread.

Telling her three children, aged two, five and seven at the time, was challenging.

‘They were aware of the lump but we had to figure out how we would tell them,’ Emma said, adding: ‘I didn’t know if they had heard the word ‘cancer’ before’.

‘My youngest didn’t quite understand but my eldest son asked: “Mummy are you going to die?” and I said “I’m not planning on it”, which was very difficult.’ 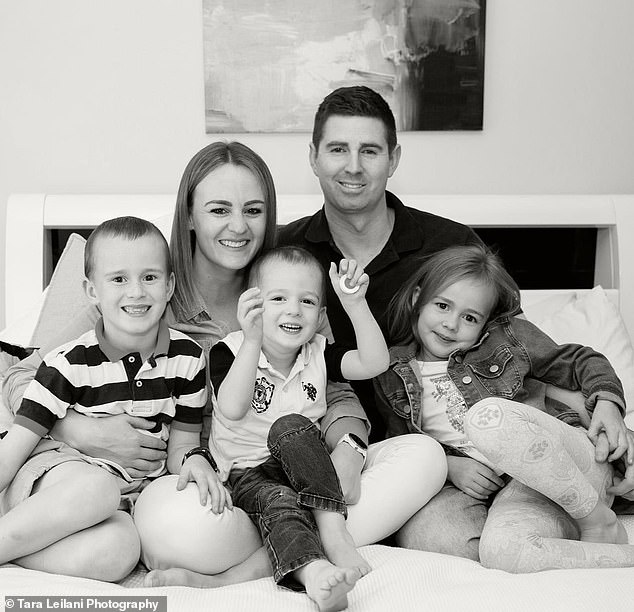 Telling her three kids, aged two, five and seven at the time, was a challenging task. ‘My youngest didn’t quite understand but my eldest son asked: ‘Mummy are you going to die?’ and I said ‘I’m not planning on it’,’ Emma said

Emma was referred to a surgeon through the public health system and opted to do some research herself.

A month later on February 17 she had breast reconstruction surgery, but wasn’t happy with the appearance of the ‘tear drop’ implant.

She said the left breast looked completely irregular to the right, leaving her feeling insecure about its appearance.

‘I couldn’t be seen, I didn’t want my husband to see me topless, it was a real struggle,’ she added.

After recovering from surgery Sydney went into lockdown in March due to Covid restrictions and Emma had to be involved with her kid’s online learning.

‘As a parent it was nice being involved with what they were being taught for the first time,’ she said.

A year later she had another surgery to ‘fix’ her lopsided breasts and turned to another surgeon for assistance.

Emma now takes a daily pill and will likely be on the same treatment for the next five to 10 years.

The cancer is hormone positive, meaning it grows in response to the hormone estrogen and needs to be closely monitored.

Emma encourages all women to self-examine their breasts regular as early detection is the key to beating cancer.

How to self-examine your breasts:

Step 1: Begin by looking at your breasts in the mirror with your shoulders straight and your arms on your hips.

Here’s what you should look for:

If you see any of the following changes, bring them to your doctor’s attention:

Step 2: Raise your arms and look for the same changes

Step 3: While you’re at the mirror, look for any signs of fluid coming out of one or both nipples (this could be a watery, milky, or yellow fluid or blood)

Step 5: Finally, feel your breasts while you are standing or sitting

Many women find that the easiest way to feel their breasts is when their skin is wet and slippery, so they like to do this step in the shower