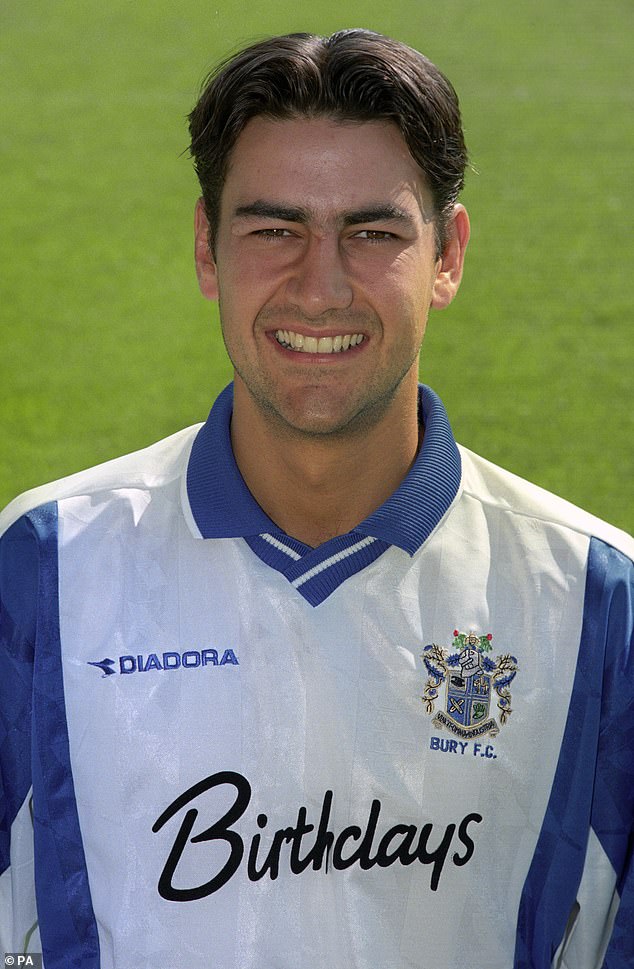 The story of a footballer who was abused by serial sex offender Barry Bennell will be told in a new BBC feature film airing tomorrow night.

The paedophile would keep his victims silent using threats of physical violence, blackmail and manipulation – grooming parents as well as children into believing he was trustworthy.

In November 2016, former footballer Andy Woodward found the strength to tell the his story, publicly waiving his right to anonymity to reveal the horrific abuse he endured from Bennell in the 1980s.

After doing so, hundreds more men, many victims of Bennell, spoke out about their own horrifying experiences of abuse, lifting the lid on a national scandal within football.

In November 2016, former footballer Andy Woodward found the strength to tell the his story, publicly waiving his right to anonymity to reveal the horrific abuse he endured from Barry Bennell in the 1980s. He is pictured playing for Bury Town football club in 1999 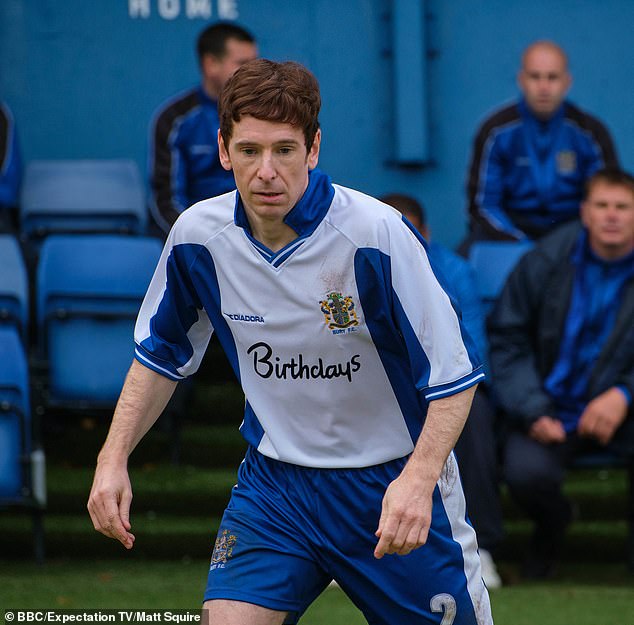 Now, the story of Andy’s life will be told in a new feature-length BBC Two drama, titled Floodlights, which airs tomorrow night. Gerard Kearns (pictured) will Woodward in the programme

The story of Andy’s life will be told in Floodlights, which will chart his journey from a boy with a love of football to a professional footballer who becomes haunted by memories of the abuse he was subject to by his youth coach.

Andy will be portrayed in the drama by Shameless star Gerard Kearns, 37, while Irish actor Jonas Armstrong will portray Bennell.

Andy was born to parents Sue and Gary Woodward, growing up in a small house in Offerton, a suburb of Stockport, Greater Manchester.

While he had a happy childhood with loving parents, the family also experienced some money troubles.

Speaking about his childhood in his 2020 memoir, Position of Trust, Andy wrote: ‘I remember the bailiffs knocking on the door and us hiding upstairs in the bedroom, pretending nobody was home.

‘At three years old I thought it was quite a good game. We used to have the electric cut off sometimes too, which meant evenings in candlelight, the four of us huddled together in the lounge.’ 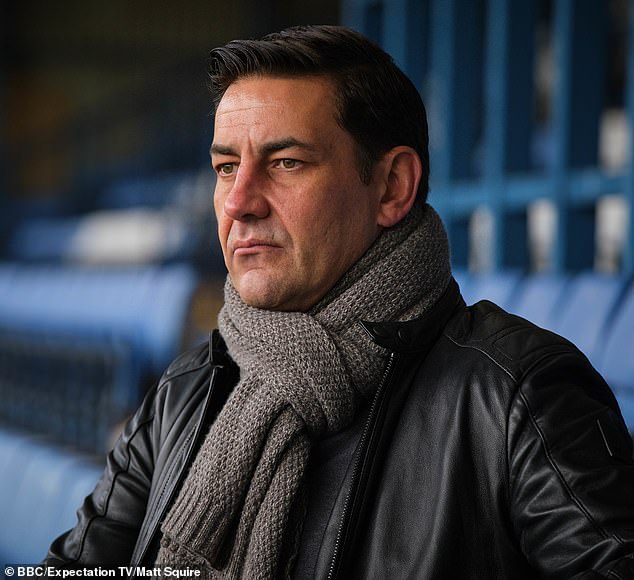 When their home was eventually repossessed they temporarily moved in with his maternal grandmother before being placed in a rental home in Cheadle Hulme.

Woodward’s parents were kind and caring, with the footballer revealing in his book they always managed to find a way to make Christmases and birthdays special despite limited finances.

He said: ‘It was a charmed life, in a way, for us kids: I didn’t have a care in the world. There were no sharp edges in our family. I didn’t have to fret about growing up’.

Andy had always loved football, having spent his childhood watching games, playing in the garden and occasionally going to watch Manchester United at Old Trafford as a treat 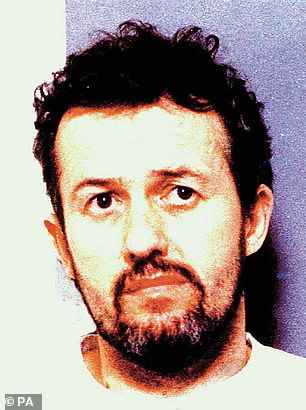 Bennell was sentenced at Chester Crown Court to four years in prison, in addition to a 30-year sentence he was already serving, for nine sexual offences against two boys, in October 2020

After district trials at the age of ten, Andy joined Stockport Boys team, where he was told a scout from Manchester City would be visiting to watch them play.

That was the first time Bennell made contact with Andy’s family.

Bennell explained to Andy’s parents that while he worked for Manchester City he also had a relationship with Crewe Alexandra.

‘My parents knew as little as I did about the whole business worked, he wrote.

‘But they gave him our number at home and said they’d talk to me about it. I didn’t meet the bloke at all after the game.’

He added: ‘It suddenly felt like anything I wanted to happen was possible, within my reach even.

‘My mum and dad knew what football meant to me and I think they were as excited as I was.

‘It was like I’d been given a golden ticket, the big chance every young would-be footballer imagines he needs. The thrill of it made my head spin’.

After the young footballer was selected for the team, he was told there were to be two training sessions a week to work out positions and tactics – something Woodward now believes was to scope out players and their parents.

‘Where should he start? Which boys were the most vulnerable ones, the ones he faced? Which parents were the most enthusiastic and most trusting?,’ he wrote.

‘He’d go round and talk to the mums and dad when the session was going on, working them out. Where could he spot an opportunity, for now or for the future?’ 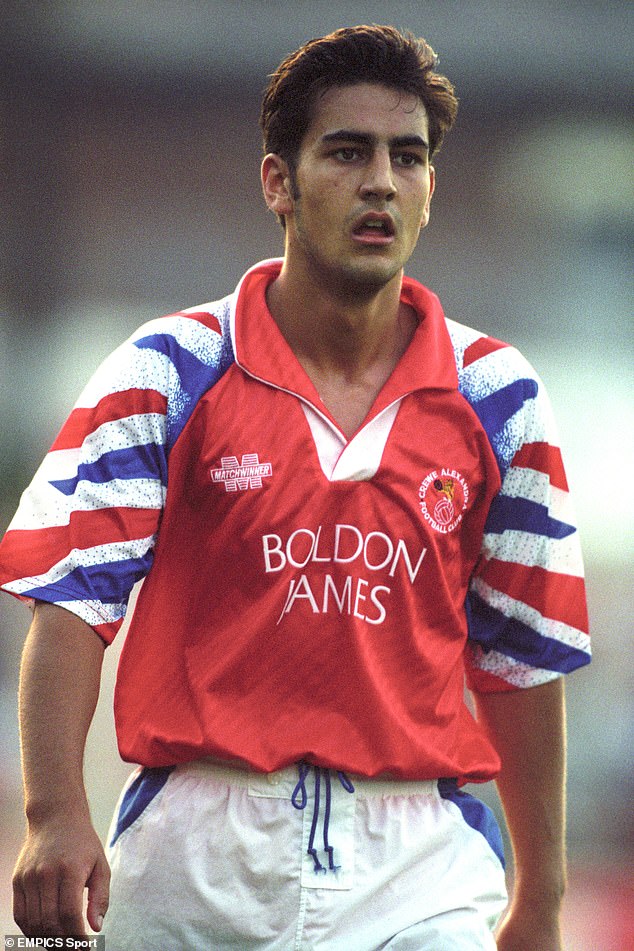 Woodward signed his first professional contract with Crewe Alexandra in July 1992. He joined Bury in March 1995

He says Bennell was as strict coach, who if you couldn’t grasp a coaching drill would: ‘take you and show you, touching you as he did it. A hand on your back, an arm on your shoulder. Pulling gently at your hair’.

Soon Bennell would begin turning up at his parents house, claiming he’d been in the area, and stopping for a drink and a chat.

One evening he suggested that the young footballer spend a weekend with him at his house in the Peak District to watch games together and do extra training.

Woodward wrote: ‘Of course, Bennell reassured my and dad. They’d never had any kind of dealings with the world of professional football. He made them feel like he was a friend, a mentor. And that all he wanted was the best for their son. He always said the right thing’.

When the abuse began, Bennell would use threats and blackmail to control the young footballer – sometimes violently hitting nunchucks against a table to show his strength.

In a 2016 interview with the Guardian, Woodward said: ‘What he’d do sometimes, to show the fear factor and make sure I never told anyone, was get out some nunchucks. 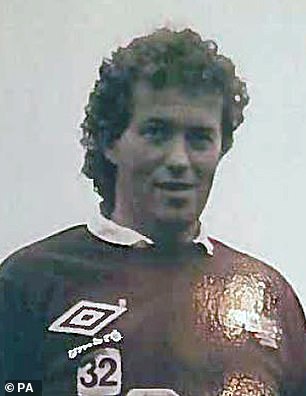 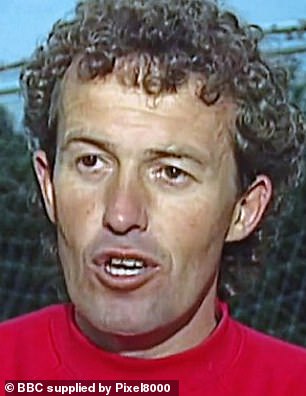 Bennell, pictured, pled guilty at Chester Crown Court to 23 counts of sexual abuse relating to 15 complainants, aged from nine to 14, between 1978 and 1992 in 1998. He was sentenced to nine years in prison

‘He was a master with them. He’d tell me to hold out a piece of paper. I’d be physically shaking. Then he’d hit it with enough force to split it in half and make a little comment: ‘You see what I can do, you see how powerful I am?’

‘It was either threats of violence or he’d use football to manipulate control. If I upset him in any way, he’d drop me from the team. ‘At any point,’ he’d tell me, ‘you will go, you will disappear and that dream won’t happen.’ It was emotional blackmail, all the time.’

As the paedophile abused Andy, he also embarked on a relationship with his victim’s 16-year-old sister Lynda.

While their relationship was kept secret until she was 18 – he would later be forced to sit alongside him as he ‘laughed and joked’ with his parents over Sunday lunch.

Their wedding took place in 1991, when Bennell was 18 and they had two sons together.

‘It was horrific’, he told the Telegraph. ‘You’re at your sister’s wedding knowing that he’s done that to you. Not only to me, but to a few of the other lads who were there.

‘There’s a picture of my parents, me, the lads, my sister and him all lined up. He’s stood there with a big grin on his face. He wasn’t smiling simply because it was his wedding day. 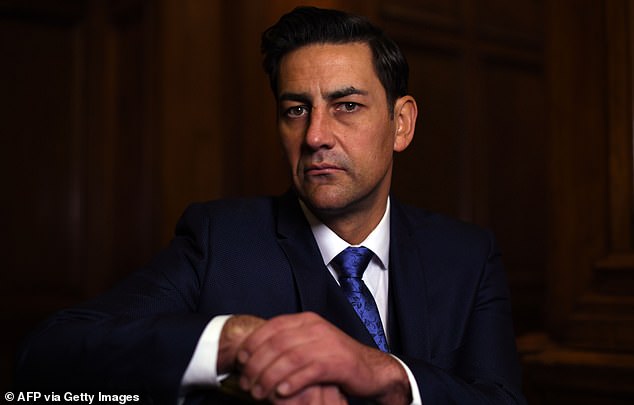 In 2016, Andy bravely waived his right to anonymity to speak out against the sexual abuse he suffered at the hands of his team coach in the 1980s

‘For him, it was a celebration of his power over everyone there. That was the pinnacle of how far his control went. He used and abused my older sister as a smokescreen.’

In June 1998, when Woodward was 24, Bennell pled guilty at Chester Crown Court to 23 counts of sexual abuse relating to 15 complainants, aged from nine to 14, between 1978 and 1992. He was sentenced to nine years in prison.

Despite his progressing football career, Woodward began to struggle mentally and following a good first season at Bury FC, would have his first of many panic attacks throughout his life.

After forging a decade-long football career at clubs including Sheffield United and Scunthorpe United, Woodward retired from the game for good in 2003.

In 2016, Andy bravely waived his right to anonymity to speak out against the sexual abuse he suffered at the hands of his team coach in the 1980s.

Decades of abuse before he was finally brought to justice: Timeline of the Barry Bennell case

1990: Marries Linda Woodward, sister of one of his abuse victims, Andy Woodward. The couple go on to have two children.

1994: He is arrested while on a 10-week tour of the United States when coaching a Staffordshire youth team.

1995: He is convicted in Florida of four counts of indecent assault on a young boy and sentenced to four years in jail. Spends time in custody prior to his conviction. His victim was also abused by Bennell in Britain, which leads to a domestic investigation.

September 1997: US authorities deport Bennell to the UK at the conclusion of his sentence and on his arrival he is charged with sexual offences relating to a number of complainants.

June 1998: He pleads guilty at Chester Crown Court on the first day of his scheduled trial to 23 counts of sexual abuse relating to 15 complainants, aged from nine to 14, between 1978 and 1992. Victims include Mr Ackley and Mr Woodward. Twenty-two alleged offences are left to lie on file. He is sentenced to nine years in prison.

May 2015: Bennell pleads guilty at the same court on the first day of his scheduled trial to sexually abusing a 12-year-old boy in 1980. He is jailed for two years. His victim did not come forward in 1997 because of the effect he said it would have on his mother. When she died in 2013 he contacted police. The court hears he was abused at Bennell’s living quarters at Taxal Edge while staying with him as he took part in coaching sessions in Macclesfield.

November 2016: Mr Woodward waives his anonymity to give emotional, powerful interviews to the Guardian and BBC’s Victoria Derbyshire programme. It leads to a number of complainants against Bennell contacting police and a fresh investigation begins.

January 2018: Bennell goes on trial at Liverpool Crown Court accused of 48 historical child sex offences against 11 complainants between 1979 and 1990.

February 2018: Bennell is jailed for 30 years at Liverpool Crown Court after being convicted of 52 child sexual offences against 12 boys in 2018.

July 2020: Bennell admits nine more sex offences – three counts of buggery and six counts of indecent assault in relation to two complainants between 1979 and 1988 who were aged between 11 and 14 at the time.

October 2020 : Bennell is sentenced at Chester Crown Court to four years in prison, in addition to the 30-year sentence he is already serving, for nine sexual offences against two boys.

Only lobster and caviar for our poppets: SAMANTHA BRICK meets the children with rarefied tastes
Bob Mackie: ‘It was a big mistake’ to let Kim Kardashian wear Marilyn Monroe’s dress
Advertisement