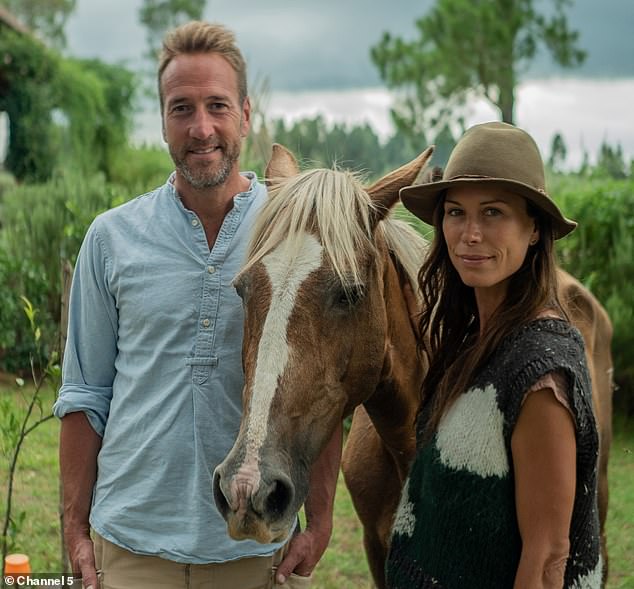 An actress has revealed why she left the glitzy red carpets of LA for a remote life in Uruguay on Ben Fogle: New Lives in the Wild.

Rhona Mitra, 46, grew up in West London but found fame onscreen after moving to Los Angeles in the ’90s, where she starred in flicks like Sweet Home Alabama and series including The Practice and Boston Legal.

On the Channel 5 show last night, Rhona explained that after being diagnosed with an autoimmune disease in 2012, she grew disillusioned with her life and bought a derelict 400-acre farm in Uruguay in 2017, where she lives alone in a house she made from horse manure.

Ever since, she has been rescuing horses and other animals, and says she wouldn’t have it any other way, in spite of admitting she has a ‘love-hate’ relationship that’s seen her robbed and threatened by locals.

Rhona Mitra, 46, grew up in West London but found fame on screen after moving to LA in the 90s, where she starred in flicks like Sweet Home Alabama and series like The Practice and Boston Legal. She revealed why she left the glitzy red carpets of LA for a remote life in Uruguay on last night’s Ben Fogle: New Lives in the Wild on Channel 5

Rhona moved to LA from England aged 21, after a complicated childhood that saw her struggle at school.

She told Ben her mother was an alcoholic, and ‘was either in hospital or in bed for most of my life’.

‘I desperately waited for my mum to get better. She didn’t and unfortunately she went to the grave without really living the life that she deserved,’ she said.

‘My dad was a surgeon, and he was off being a surgeon. There was no nucleus, there was no foundation, no North Pole.’

Rhona swapped her LA lifestyle, left, for a remote life in Uruguay rescuing horses and focusing on her health 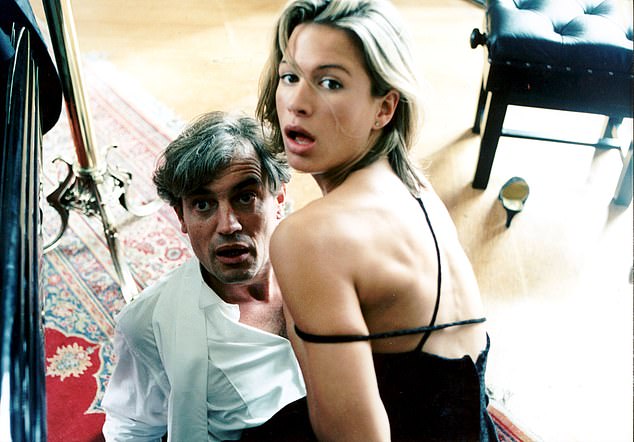 ‘You do things like run away with the circus, run away to LA,’ she said.

‘A manager that met me in London took me to Hollywood and put me in with the sharks. And I could write a book on those first ten years that would horrify people. It was awful, I really, really wasn’t happy.

‘I went along with it because it was intoxicating. I enjoyed a part of it, but I did feel like a stowaway on this Titanic.’

She told Ben she felt like a ‘fraud,’ because she was abandoning who she truly was to make it as an actress.

‘What was really hurting is my deep self asking, “How much longer are you going to do this?”,’ she said. 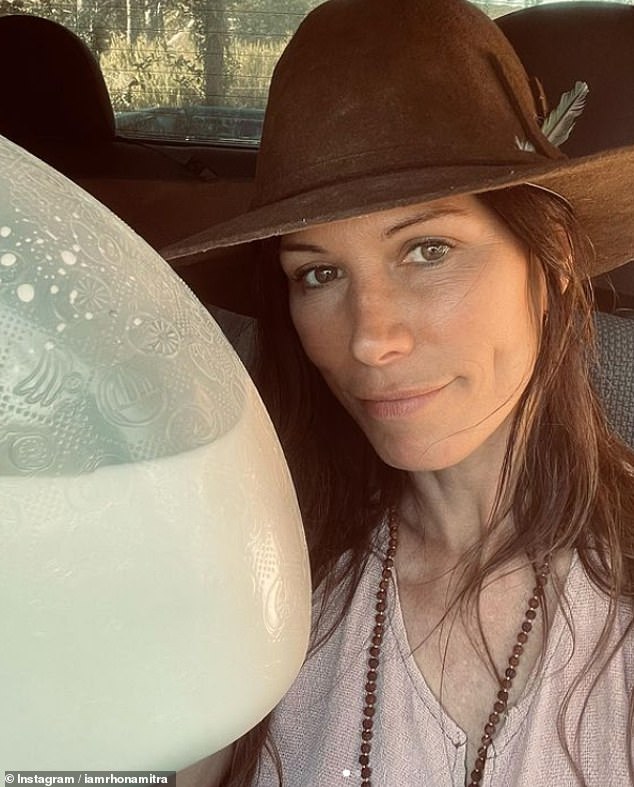 The former actress is now settled in Uruguay, where she manages 400 acres of land near her farm 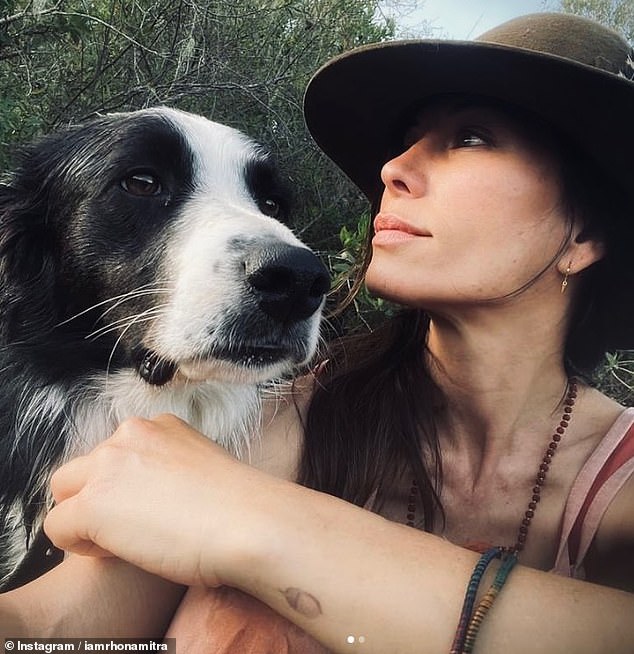 Rhona said an autoimmune disease that affected her speech and memory struck her in 2012, forcing her to go through two years of hard recovery in a cabin in the Uruguayan wilderness 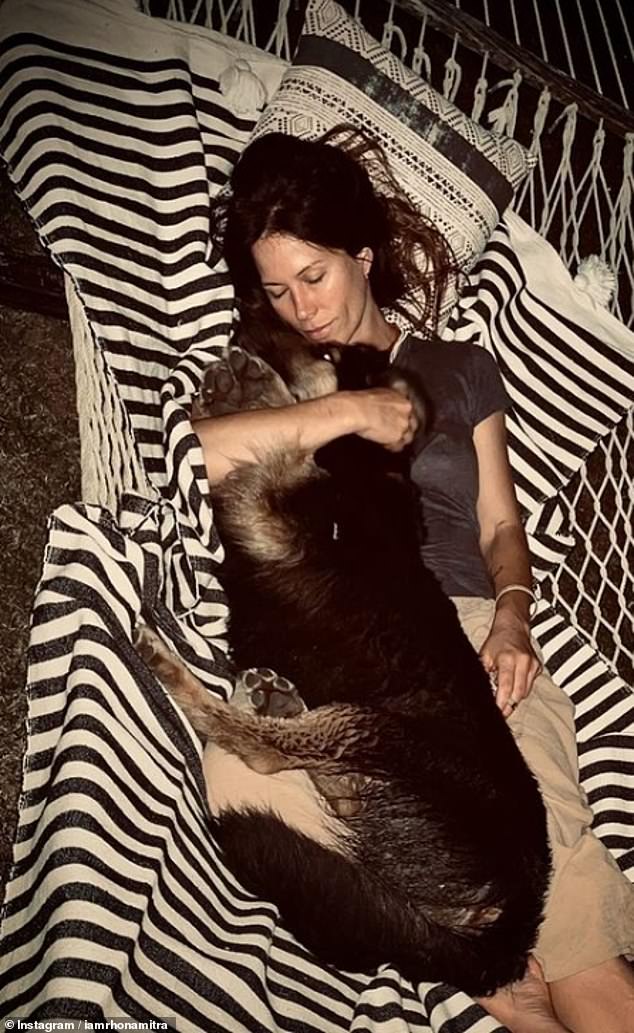 ‘If you caught me a couple of years ago, I was in such…’ she said, unable to finish the sentence.

‘We’re on the other side where I can act look at you and smile. It’s been pretty tough,’ she added, tearing up.

After years of embracing the celebrity lifestyle, it came to a halt when she was diagnosed with an autoimmune disease.

‘My central nervous system was completely under attack,’ she told Ben, explaining her brain becamse inflamed, which impacted her speech and her memory.

In spite of this, Rhona kept working, but was ‘deeply in despair’ over her condition.

‘I would show up, get on and go home and pass out and show up and just do my best. 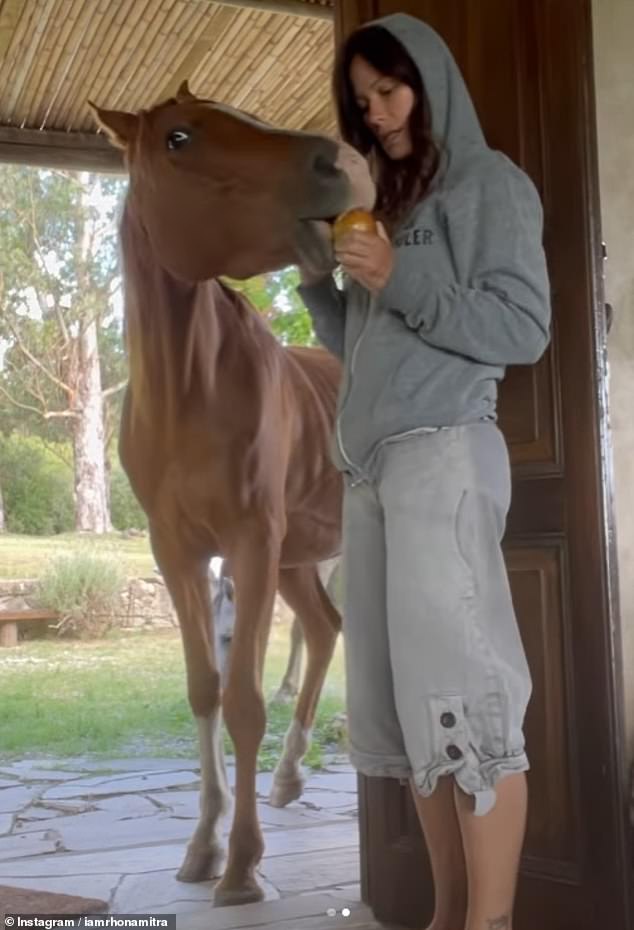 Rhona began to rescue horses after moving to Uruguay, nursing them back to health on the farm 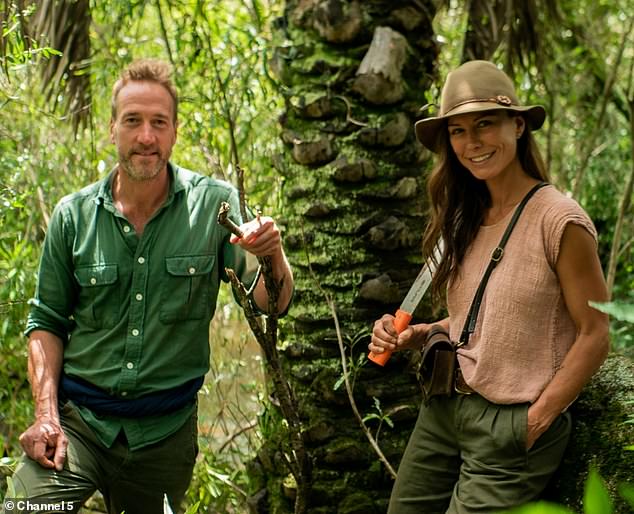 Ben learned about the tough life Rhona faces on the farm, including being intimidated by neighbours and having no back up plan if anything should happen to her

She revealed to the presenter that it took her two years until she was ‘out of the woods.’

‘I went through two years of very aggressive recovery where I had to go live into a cabin and heal myself through food, plants and actually, animals,’ she said.

This retreat put her on a new path, moving to the mountains of Uruguay to focus on her recovery.

‘I started working with horses with a wonderful woman in these mountains and she taught me about somatic healing with horses, which is herd work,’ she explained.

‘During this two-years journey, something just switched that was almost beyond my control, almost, and it was moving me towards something, it wasn’t comfortable, it wasn’t familiar.

‘I knew that what was behind was not something I could go back to, but I didn’t know what forward was.’ 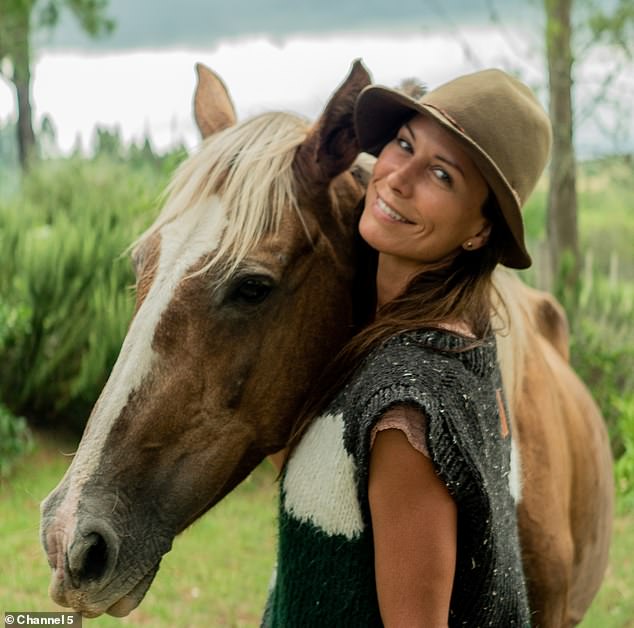 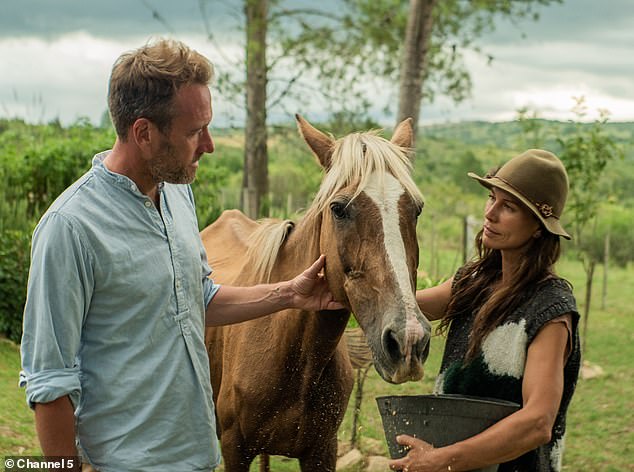 Ben was impressed by Rhona’s choice of lifestyle, but admitted she must have gone through depressing periods to get to this level

‘But if she hadn’t experienced that, she wouldn’t be here,’ he added.

This brush with illness gave Rhona a totally different perspective on life, and motivated her to leave her comfort zone.

‘I used to live in Venice Beach in California. My view there used to be a car park and so I’ve changed the view, basically,’ she told Ben.

Living in a house made of horse manure she built herself, she called her lifestyle in Uruguay ‘a great remembering.’

‘As versions of me gently falls away, like leaves from a branch, I’m actually just remembering who I am,’ she said.

‘You don’t realise how much you’ve forgot until you actually start remembering.’

Rhona also addressed the stereotypes that people could have about her being a high- maintenance former actress.

‘There is a stereotype that if you come from that world, you must have a silver spoon. That you’ve got some, I don’t know, money growing on trees,’ she said.

‘In a way, what I feel, especially because I’m alone, single, and I don’t have kids, is that a lot of what I have to do is take care of myself.

‘That’s just by necessity, it’s dangerous out there.’ 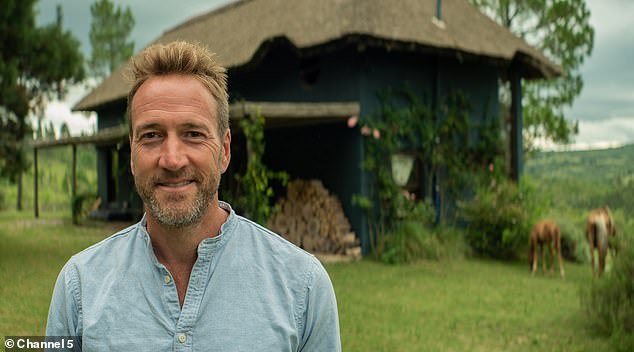 ‘I got hurt a couple of times, I could have died a couple of times, and I don’t thrive off that, it’s not an adrenalin thing. I’m not trying to prove anything, but I’m alive here, and it puts me through the test of who I truly am.

‘The masculine/feminine balance of what it encompasses suits me,’ she added.

She explained that she spent the first few years on her land in Uruguay watching and listening to the seasons and how they affect the land.

She was also issued with a few tough learning curves since moving to the wilderness, including discovering the local equivalent of the British poison ivy.

‘I didn’t know for the longest time,’ she said. ‘Once you get it, if you scratch it, it spreads, I ended up with it on my eyes, I didn’t know what it what, you learn the hard way,’ she said.

‘There’s times where I’ve been petrified, frozen in my ability to move forward, because the things that I was confronted by in the first couple of years, the test that I was put through, it nearly broke me a couple of times.

‘What I realised is that I had to do what I had to do, to adjust to what’s going on in me; Dust off my heart a bit, re-engage with my trust in this place.’

Rhona, who hadn’t had a visitor come to see her on the farm, apart from a few neighbours, in three years before Ben’s visit, shared a glimpse into how dangerous life can get on the farm. 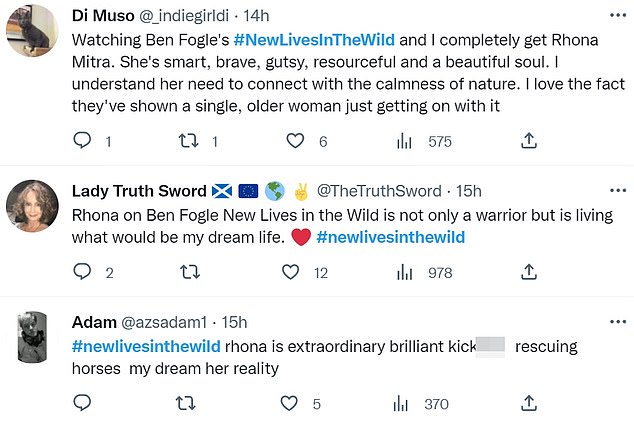 Viewers were impressed with Rhona’s resilience and grit after she appeared on the show, saying she was living the dream

She recalled being bucked off her horse’s saddle between two rivers, with the rapids passing her by and a large cut across her face while she tried to hold on to the upside-down saddle and keep her head above water.

‘It’s just what needs to happen, I understand there is a danger to it,’ she shrugged.

On the show, Ben met Rhona’s friend Christine, a botanist who lives a three-hour car ride away from the former actress.

‘It’s not easy when you don’t speak the language to begin with, when you have to start anything from scratch and you don’t really know who to contact,’ Christine told Ben.

‘Maybe the last time I saw you, you were desperate and I told you, “If you’re not happy, sell it and go away, but it’s a shame because this place is an oasis”,’ she told Rhona.

The actress admitted she has a ‘love-hate’ relationship with her farm.

Rhona also admitted to Ben she sometimes struggled with the loneliness of her lifestyle.

‘It’d be easier if there were someone to share the burden with,’ she told Ben, adding she can’t go back to her old life and abandon the horses and animals that she’s rescued and who live on the estate.

‘I think it’s the thing that a lot of people say they want to be part of this life, but I’m not going to give this up.

She also teold Ben that she would ‘100 per cent, absolutely’ choose the horses and land over a man.

Rhona admitted that she hasn’t travelled around Uruguay since moving to the farm, because she has been threatened by neighbours and had to stay at the farm to make sure no one stole from her.

‘I basically had to babysit the farm and watch it almost 24/7. I was so exposed and vulnerable in my first years,’ she said.

She said people stole pipes from her and that some also took her clothes and shoes.

‘I had people cut fences and let their cows in, intimidating me by coming [on her land] and hunting, it felt like bullying,’ she told Ben, adding it was a test to see how tough she was.

‘It’s very unusual for a single girl to move to this part of Campo, by herself and with no partner, no husband, that’s really strange,’ she said.

Since moving to Uruguay, Rhona has been working with local conservation charities and rescuing animals, which she said is her next role in life.

Viewers were impressed with Rhona’s resilience and grit after she appeared on the show.

‘Rhona on Ben Fogle New Lives in the Wild is not only a warrior but is living what would be my dream life,’ one said.

‘Rhona is extraordinary brilliant kick*** rescuing horses. My dream her reality,’ one wrote.

‘Rhona comes across as a really lovely person,’ one said.

‘Watching Ben Fogle’s New Lives In The Wild, and I completely get Rhona Mitra. She’s smart, brave, gutsy, resourceful and a beautiful soul. I understand her need to connect with the calmness of nature. I love the fact they’ve shown a single, older woman just getting on with it,’ another wrote.

Ben Fogle: New Lives In the Wild is available on My5

This $40 clay mask with a loyal following is a must for detoxifying, deep-cleansing, and brightening
The Crown does New Labour! First glimpse of Tony and Cherie Blair in series 6
Advertisement