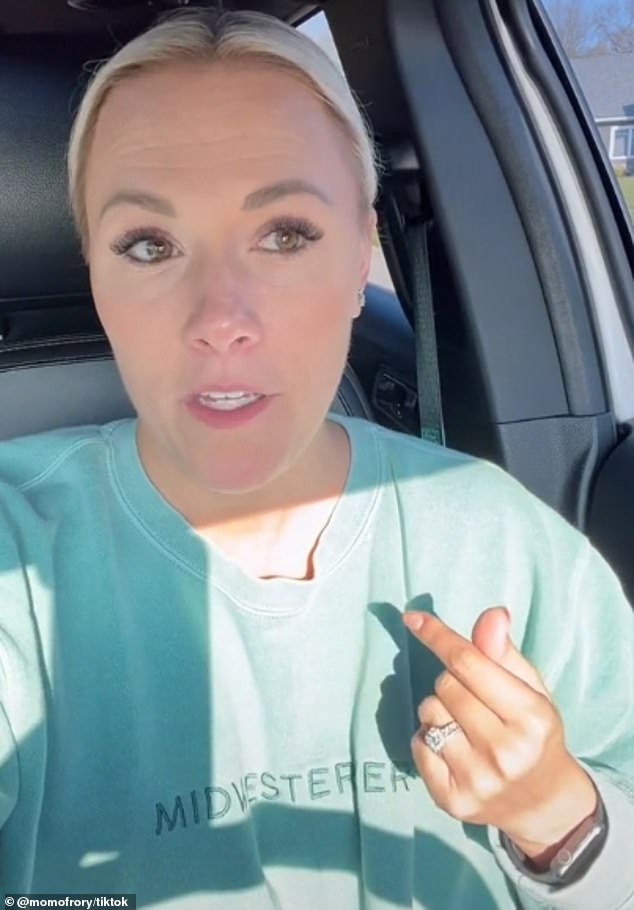 A mother whose infant daughter has severe food allergies has shared photos of her baby’s rash-covered skin after drinking cow’s milk to highlight the devastating impact of the nationwide formula shortage.

Kayzie Weedman, 29, from Indiana, shared her concerns in a now-viral TikTok last week, explaining that her nearly six-month-old daughter, Palmer, is allergic to the ingredients in most formulas and can only consume specific brands.

‘Let’s talk about the formula shortage that is plaguing the U.S. right now because more people need to know about this,’ she said.

‘You go to your local Target, your local Walmart, you think you’re going to get the formula your baby needs? Nope. Shelves are bare. And there are babies who can’t have just any formula on the shelf.’

Kayzie Weedman, 29, from Indiana, shared her concerns about the nationwide formula shortage in a now-viral TikTok video last week 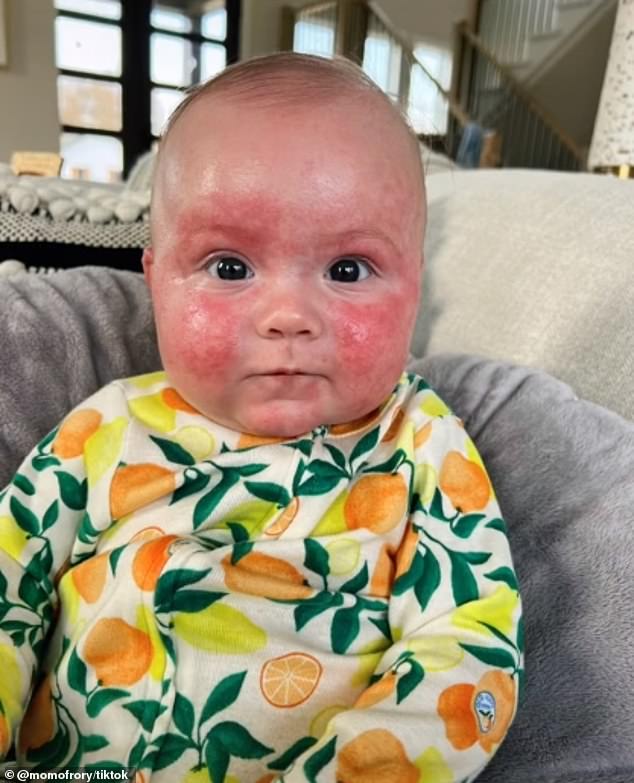 Weedman then paused to share pictures of a painful-looking red rash on her daughter’s face and head to show what happens when she has cow’s milk.

‘So, what am I to do when I go to the shelves and I can’t get [the] formula I need?’ the mom asked. ‘The pharmacist who fills her prescription formula can’t fill it because they can’t get it. It’s back-ordered six months, and I just have to sit there and stare at empty shelves and not know what I’m going to do next.

‘Formula is not available on any of the shelves,’ she stressed. ‘They’re empty — nowhere near three hours near me [has it]. Can’t get the formula. What are we going to do? Where do we go from here? How do formula moms feed their kids? What are our options? This is crazy.’

Weedman then cut to footage of the empty formula shelves at her local store, writing: ‘This breaks my mom heart. Pray for us formula moms.’

The video has been viewed more than 1.4 million times and has received thousands of comments from fellow parents, including those in similar situations. 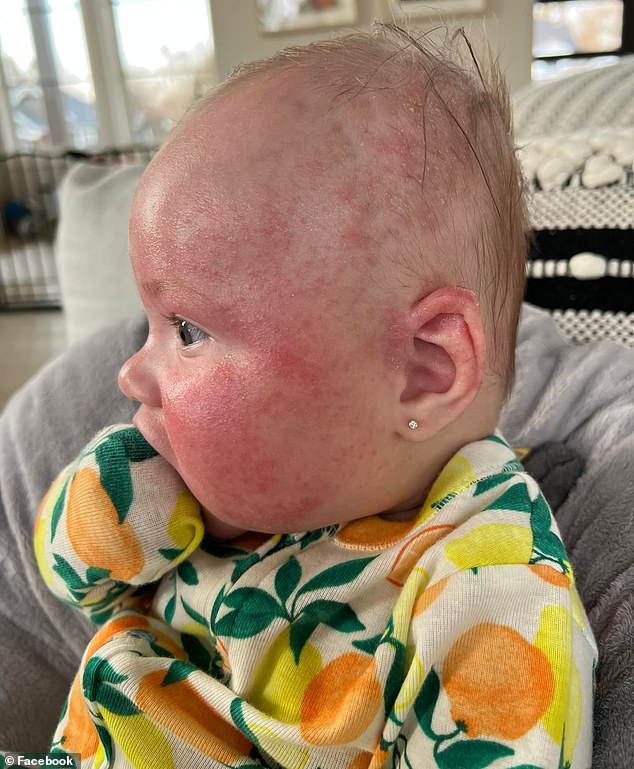 Palmer is allergic to cow’s milk protein, gluten, soy, and goat’s milk and can’t tolerate most formulas that are on the shelves 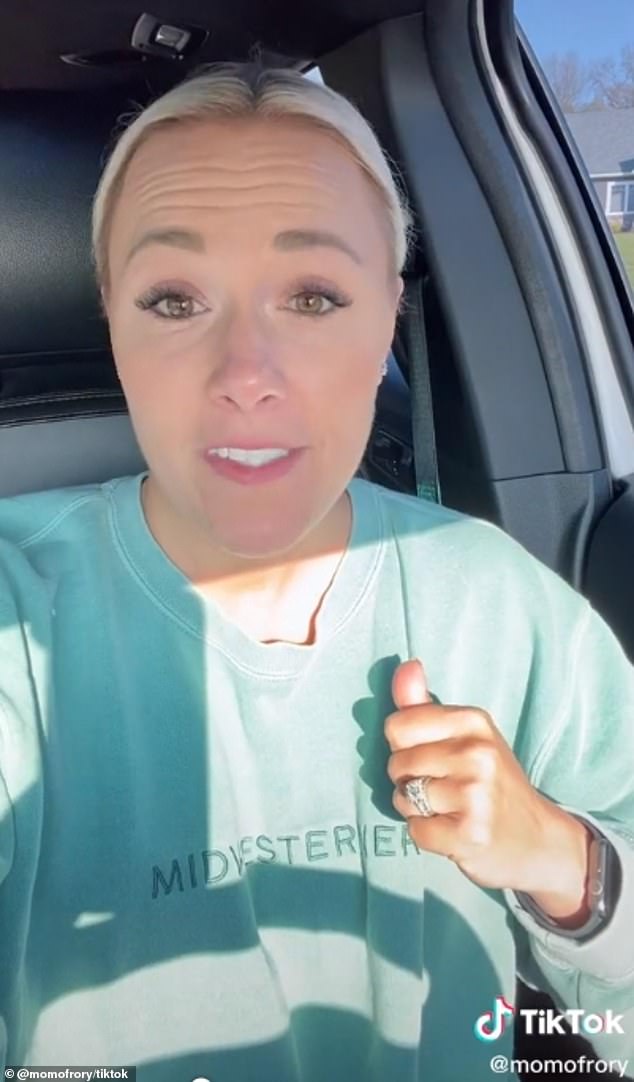 ‘The pharmacist who fills her prescription formula can’t fill it because they can’t get it. It’s back-ordered six months,’ Weedman explained

‘I’m 38 weeks pregnant and so terrified!! Just bc I plan to breastfeed but you never know! Things don’t always go as planned,’ one mom-to-be wrote.

Another added: ‘I cried at Costco today over this. Not a single thing of formula. I just want to take care of my baby.’

‘I so understand,’ someone else shared. ‘Me and my daughter went to 10 different stores for my nephew and no luck.’

Others kindly offered to ship Weedman the formula she needs to feed her daughter.

‘I searched the comments for the formula you need! I can overnight 7 cans of up and up the orange one for target‼️‼️‼️‼️’ one TikTok user promised. 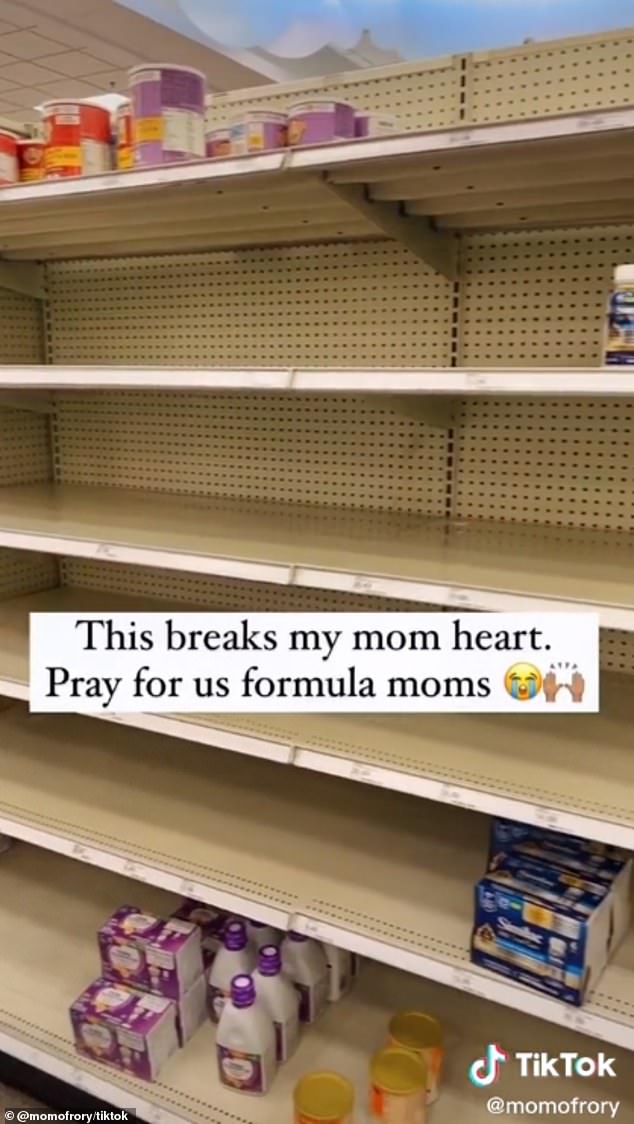 The video has been viewed more than 1.4 million times and has received thousands of comments from parents who are in similar situations or offering to send her formula

‘I would be more [than] willing to buy you some & send it [to] you. Just let me know what kind you need,’ someone else commented.

Another added: ‘Seeing all these mommas willing to help this mom out and send her formula. Y’all are amazing!! I’ll keep [an] eye out at our Target too.’

Weedman, who also has a toddler son, Rory, told BuzzFeed that she started noticing the formula shortage last year, but it has gotten significantly worse in recent months. She said she has had to drive up to two hours to find her daughter’s brand of formula.

‘My daughter, Palmer, is on a hypoallergenic formula due to a slew of allergies that she has. She has a cow’s milk protein allergy, a gluten allergy, a soy allergy, and a goat’s milk allergy,’ the mom explained.

‘She does not have the ability to switch to any formula that is left on the shelf because most formulas have all of her allergens and she breaks out in a horrible rash that turns into boils and scabs, she has trouble breathing and wheezing, and she constantly throws up.’

Weedman noted that she couldn’t breastfeed her daughter because of her immune system and allergy needs, saying it’s ‘infuriating’ that she and other mothers are being told to nurse during the shortage when that isn’t an option for many parents. 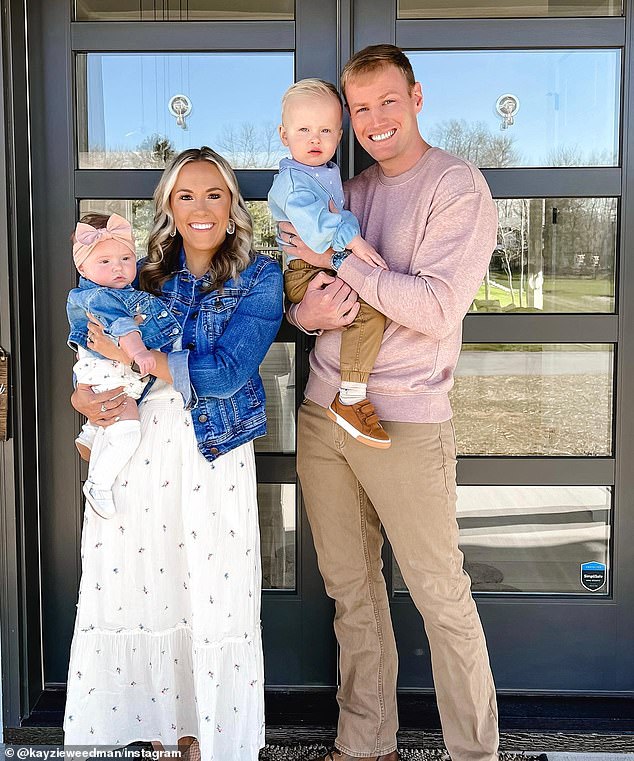 Weedman and her husband, Andrew Weedman, also have a toddler son, Rory 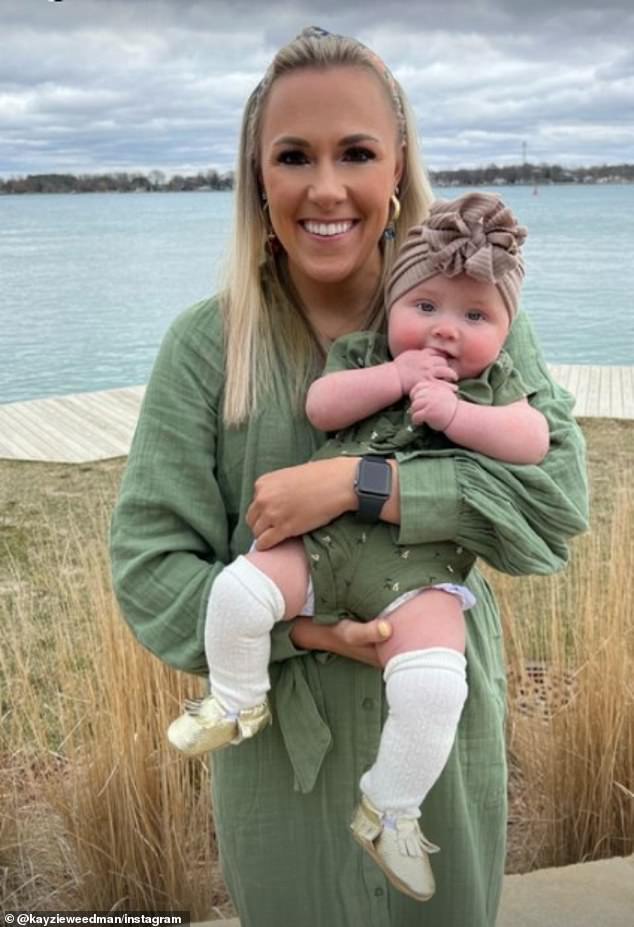 Last month, she opened up about her daughter’s allergies on Facebook and asked people to check their local Target for the brand’s hypoallergenic formula.

She explained that is the only formula her daughter can tolerate aside from Similac Alimentum, which is backordered.

Weedman later shared an update to thank people for their contributions, saying they now have enough formula to feed their daughter for the next three months.

‘We got the cans we needed WOW! I am blown away by the amount of people that want to help myself and my daughter!’ she wrote. ‘We have secured 12 cans of her formula and we should be good for about three months!

‘You all don’t know how much this means to me and it’s crazy how social media can be used for good!’ she added. ‘People just wanting to help people that’s a really cool thing and I’m grateful for Each and every one of you that reached out, went to your Targets and tried to find the formula, or just messaged me to say you’re thinking of us! The world can really be an awesome place.’ 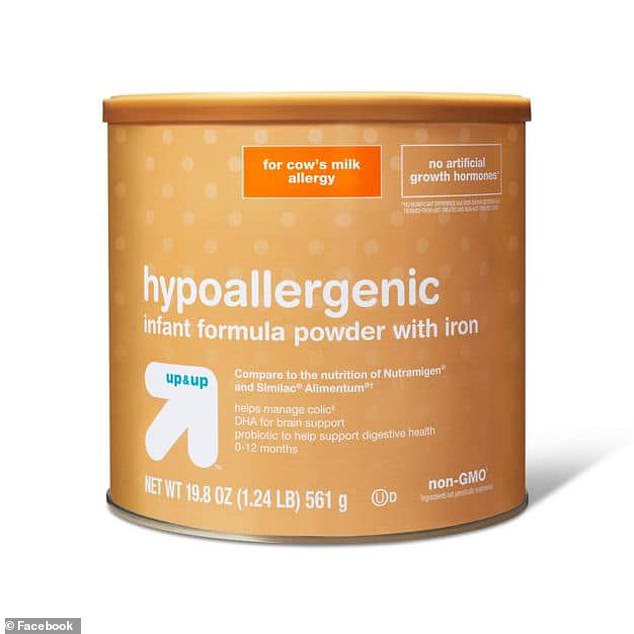 Weedman said her daughter can only tolerate Target’s hypoallergenic formula (pictured) and Similac Alimentum, which is backordered 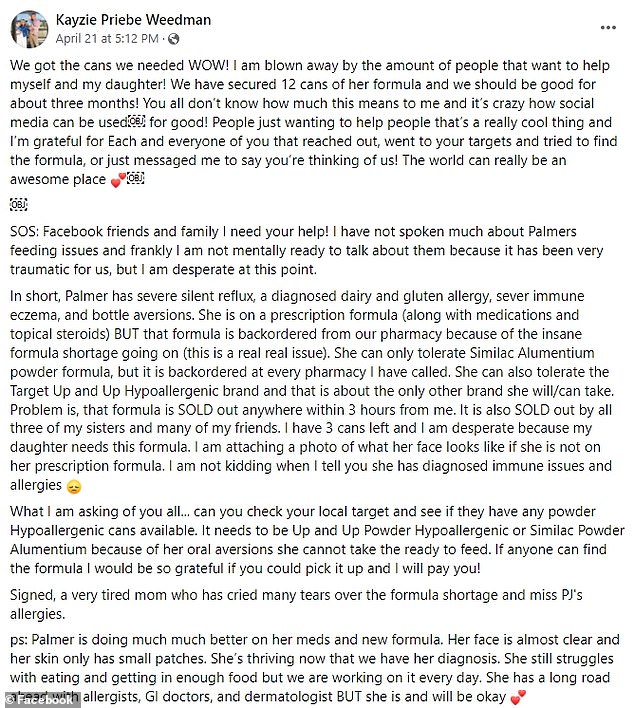 Formula shortages have been compounded by supply chain snags and historic inflation, leaving about 40 percent of baby formula products out of stock nationwide, according to data firm Datasembly.

The House Oversight Committee is launching an investigation into the baby formula shortage and demanding records and information from four of the largest manufacturers.

‘The national formula shortage poses a threat to the health and economic security of infants and families in communities across the country — particularly those with less income who have historically experienced health inequities, including food insecurity,’ Democratic Chairwoman Carolyn Maloney of New York wrote in letters to Abbott Nutrition, Mead Johnson Nutrition, Nestle USA and Perrigo, first obtained by ABC News.

The House Oversight Committee is the investigative arm of Congress and has the broad authority to probe a variety of issues. The panel is looking into the price gouging around infant formula and the steps the companies are taking to address the shortages.

In mid-February, Abbott Laboratories issued a nationwide baby formula recall and ceased operations at its plant in Sturgis, Michigan, amid reports of babies contracting bacterial infections from its products.

Maloney specifically asked Chris Calamari, chairman of Abbott Nutrition, for information about the recall of its formula after several babies were hospitalized and two died from a rare bacterial infection.

The chairwoman wants answers to her questions, along with a briefing from the companies, by May 26.