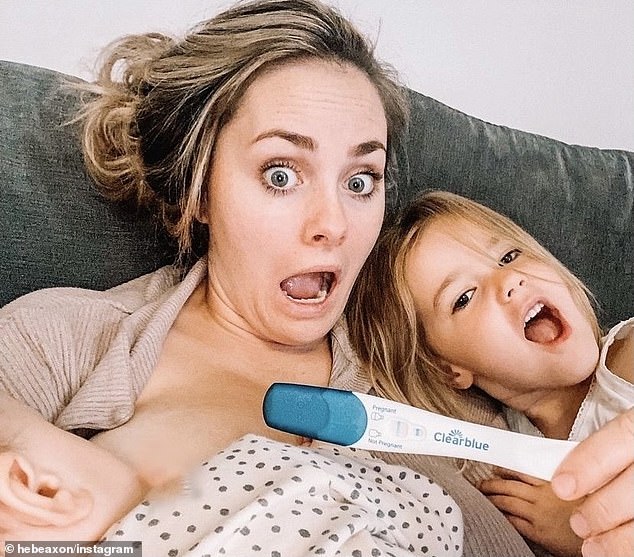 A mother who is currently expecting her third child has revealed how she was slammed as a ‘waste of space’ by social media trolls for taking three periods of maternity leave back-to-back.

Hebe Axon, 26, from Blackpool, an accountant, initially went viral in January when she shared a TikTok about returning to work after her second baby – already pregnant with her third child, due at the end of May.

Speaking to the Sun, she explained by the time she returns to work in April 2023, she will have worked just 11 months in over five years.

‘Despite taking an extraordinary amount of time off, I don’t — and won’t — feel guilty. It’s my right as a woman and a mother,’ she said.

She added she’s faced a torrent of abuse online since posting the video, saying: ‘I’ve been told online that I’m a “burden”, a “waste of space” and that I’m “unproductive”, which has left me feeling upset, but also determined not to feel ashamed of my decisions.’

Hebe Axon, 26, from Blackpool, an accountant, pictured with daughters Hallie and Isla and her positive pregnancy test for her third child, had made a TikTok video in January about going back to work after her second stint of maternity leave 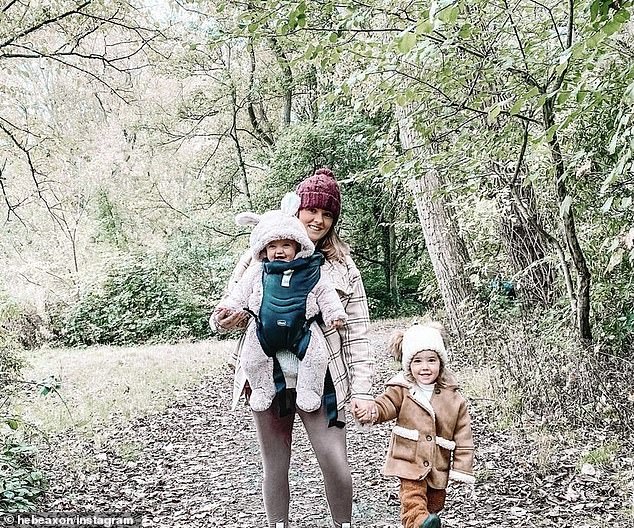 But Hebe, pictured with Hallie and Isla, revealed in the video that she found out she was pregnant again and would soon have to take more maternity leave

The clip, which Hebe expected to only reach a few hundred people, had 1.9 million views and 1,331 comments.

One commenter had written: ‘You should quit your job and be a full-time housewife’, while other branded her ‘lazy’.

The mother-of-two was also told she and her fiancé Sam Finch, 25, should use birth control and was branded a ‘drain’ on her employer. 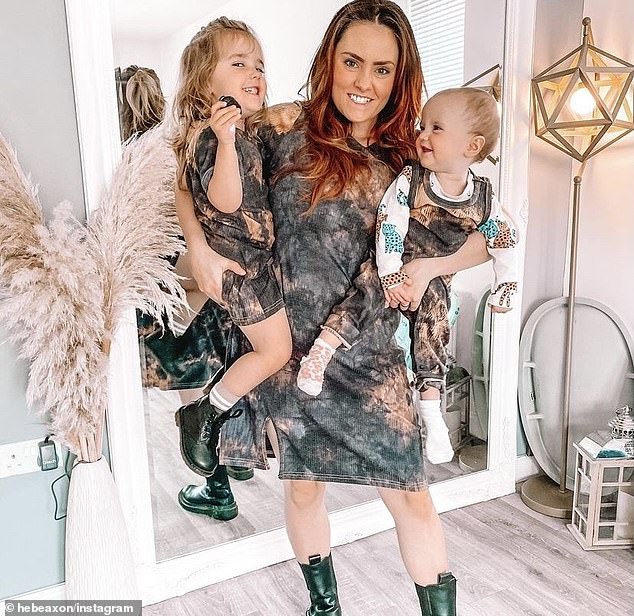 Expecting the video to make other women laugh and to be relatable to others, the 26-year-old, pictured with Hallie and Isla, was shocked when she saw the hateful comments pouring in

Leaving school at 16 in 2012, Hebe became an apprentice accountant and worked her way up.

She met her partner Sam at school and reconnected with the engineer in 2016, getting engaged in 2021.

In June 2018, she told her employer she was pregnant for the first time, and went on maternity leave at the end of that year.

In October 2019, she went back to work, only to be furlouhed in March 2020, and fell pregnant with her second baby a month later.

She returned to her accountancy job in October last year after furlough, holiday and maternity leave – a total of 19 months – but was nervous about going back, because she was already six weeks into her third pregnancy. 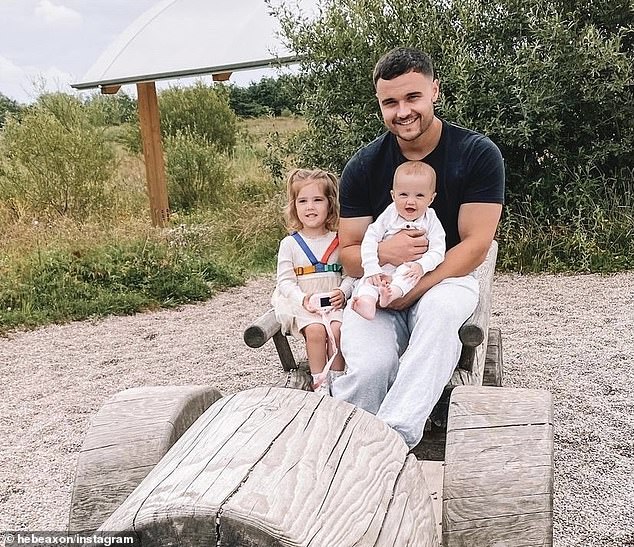 The 26-year-old was also told she and her fiancé Sam Finch, 25, pictured with Hallie and Isla, should use birth control and called a ‘drain’ on her employer

Despite her fears, her employers were kind and understanding, giving her their congratulations during a meeting where she explained her news to them.

And she is now preparing to have her third baby later this month after saying goodbye to her colleagues again in April.

Hebe does not feel guilty for her choices and feels that it should be her right as a woman and mother to take maternity leave, like others across the country.

But she has received criticism and abuse online since she started her family as not everyone agrees with her decision.

Some have told her that she is ‘unproductive’ and a ‘burden’ and ‘waste of space’.

Hebe stands by her decision and says she has worked very hard all her life to get to where she is now.

Hebe said she was shocked to be labelled a ‘drain’ on her employer for wanting to take time out of work to spend with her new babies.

The 26-year-old said she had tried to hone in on the positive feedback she got on the TikTok clip.

However she struggled not to feel hurt by the hateful comments which were mostly from other women.

One person wrote: ‘This is the reason why companies prefer to hire men over women of child-bearing age.’

Hebe said that her fiance supported her after the negativity she received online.

But she said she was left struggling to sleep and stressed, midway through her third pregnancy. 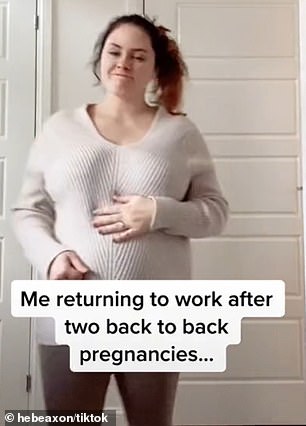 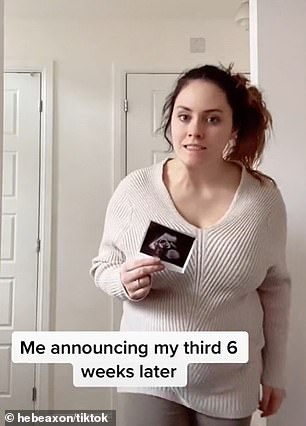 Hebe, pictured in the TikTok video that attracted criticism, revealed that by the time her maternity leave ends and she comes back in April 2023, she will have worked 11 months in five years

The 26-year-old thinks that people’s perceptions of maternity leave are skewed, with most thinking it is paid holiday and a chance to do nothing.

Hebe explained that she will get 90 per cent of her full pay for the first six weeks of her maternity leave.

Afterwards she will get statutory maternity leave pay, which is £620 a month.

She added that the family will be scrimping and saving, cutting family holidays and days out and buying own brand foods.

However for her family, it is a sacrifice they are willing to take and she will very busy during that time, studying for an accounting exam, looking after her new baby and her other children and running the household.

Hebe says that women should not be shamed for having babies and taking time away from work to raise them.

She added that if men were having babies it would not happen. 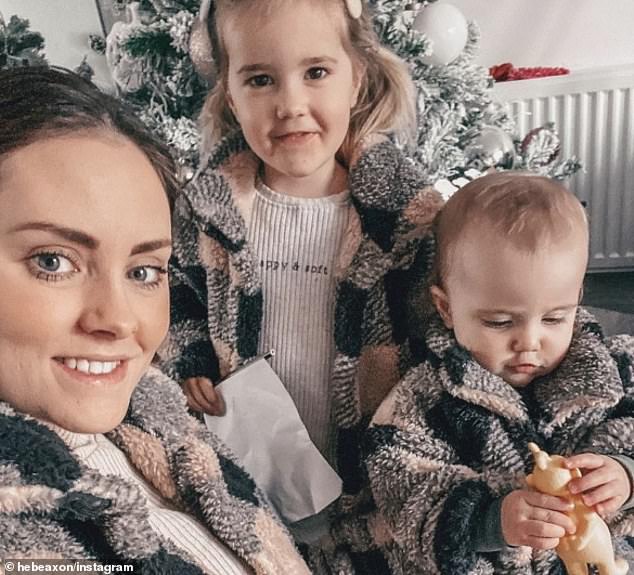 The 26-year-old, pictured with Hallie and Isla, thinks that people’s perceptions of maternity leave are skewed, with most thinking it is paid holiday and a chance to do nothing

What are your rights to maternity leave in England?

Eligible employees can take up to 52 weeks’ maternity leave.

The earliest that leave can be taken is 11 weeks before the expected week of childbirth, unless the baby is born early.

Employees must take at least 2 weeks after the birth (or 4 weeks if they’re a factory worker).

SMP for eligible employees can be paid for up to 39 weeks, usually as follows:

Tax and National Insurance need to be deducted.

Some employment types like agency workers, directors and educational workers have different rules for entitlement.

You can offer more than the statutory amounts if you have a company maternity scheme. You must make sure your maternity leave and pay policies are clear and available to staff.

If the baby is born early

Leave starts the day after the birth if the baby is born early.

The employee must give you the child’s birth certificate or a document signed by a doctor or midwife that confirms the actual date of birth.

You must write to them confirming the new end date for their leave.

If the baby dies

Employees still qualify for leave or pay if the baby:

An employee’s employment rights (like the right to pay, holidays and returning to a job) are protected during maternity leave.

You still have to pay SMP even if you stop trading.