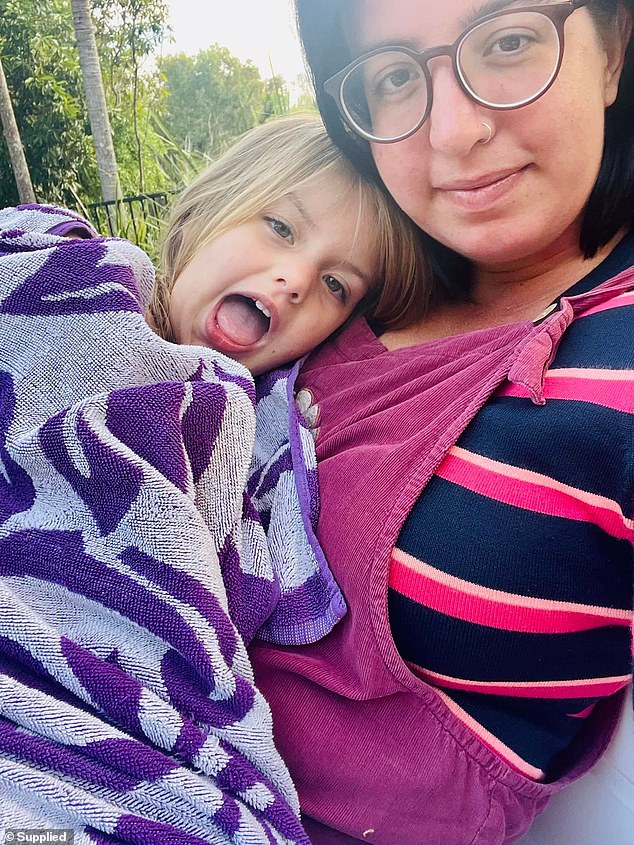 A university-educated single mum who has been homeless twice in just 18 months and is now living in a caravan fears that she will be on the streets again before Christmas.

Lauren De Groot, 27, lost her first home to fire when rats chewed through wiring in January 2021, and her second when floods swept through Lismore in northern NSW in February, 2022.

She now fears she and her three-year-old daughter, Freya, will be homeless again in October, unless she can work out a way to secure affordable, long-term housing.

Speaking with FEMAIL the disability support worker, who works as a sole-trader, explained that on paper her business doesn’t count as income.

Lauren De Groot, 27, and her daughter Freya have been left homeless and escaped death by moments twice in just 18 months

‘When I go to the banks for help or apply for a rental I am assessed as a single mum on Centrelink payments,’ she said.

‘And there is a huge stigma around that. Even though I do work, because it is for myself they can’t include it in my financial history.

‘But as a single mum with a toddler and little support I can’t get a full-time job with a company, because it isn’t flexible enough for me to be able to drop everything if she is sick.’

Lauren, who studied social work at university, never imagined she would one day face repeat homelessness, labelling the experience dehumanising and traumatic.

She said being homeless was horrific, the services flawed and the fear palpable. She added that it’s worse for single women, especially those with children.

‘You are faced with impossible options – sleep in the car or share a home with a housemate you wouldn’t usually have near your children,’ Lauren said.

‘There are women all over Australia, but especially up here in northern NSW right now, making those impossible decisions every day, trying to work out how to keep their kids fed and safe with no options, some even staying in dangerous relationships.’

Lauren is now staying in an old caravan which she has been able to get on a short-term loan. 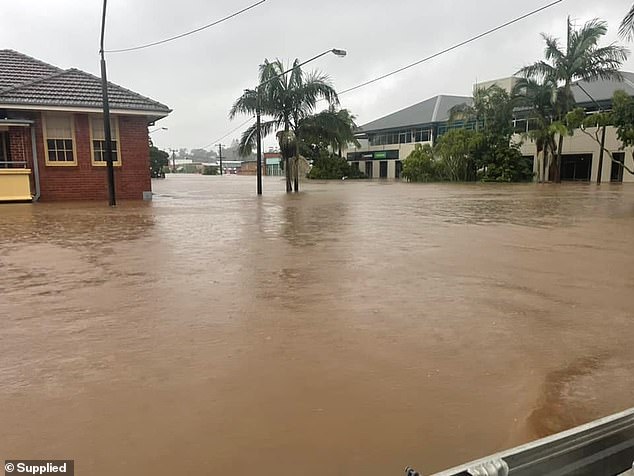 She is trying to secure grants, public funding and donations to build an off-grid tiny house so she and her daughter never face homelessness again.

The mum shared every harrowing moment of her journey so far – twice escaping death with just moments to spare.

Lauren doesn’t remember what woke her the night she and her daughter escaped the fire which tore through their rural home.

All she remembers is waking up, sensing smoke or flames and racing to get her sleeping two-year-old out of bed.

‘I don’t think I remember smelling anything, I just remember everything being bright and pitch black at the same time,’ she said.

‘Then when I got outside, my feet had just landed on the grass, and the gas cylinder in the kitchen exploded. 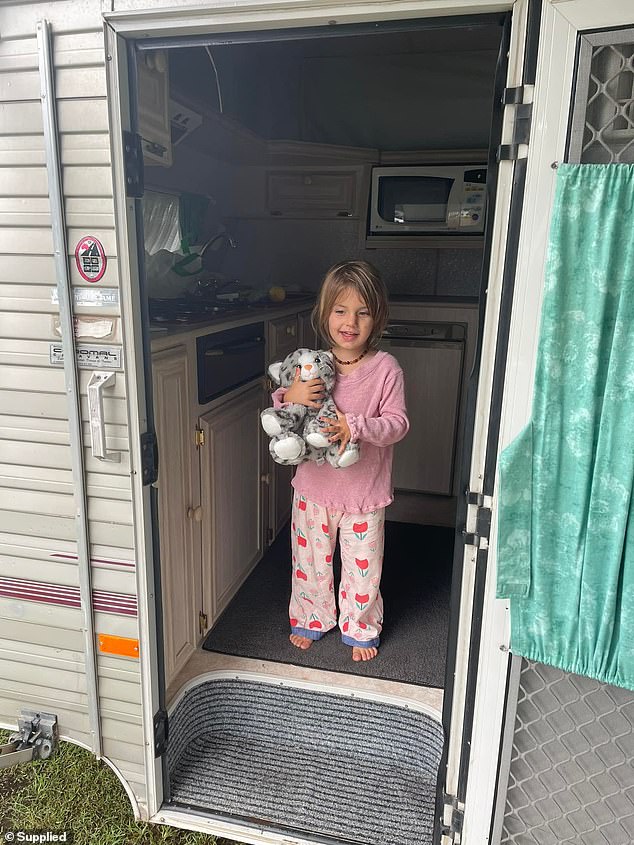 Now they call this caravan home – and while it is better than couch surfing or living in their car it is far from perfect ‘we are always muddy, there is no bathroom’

‘The whole house went up instantly. We only just got out,’ she said.

Lauren and Freya slept on the neighbours’ floor before heading into Centrelink to ask for help the next day.

‘I remember standing in there in my pyjamas,’ she said, still embarrassed.

‘But it was all we had left and we needed help.’

Her car was spared in the fire, something she is grateful for, and people were quick to donate necessities to help them get back on their feet.

‘The first time I was homeless was the hardest, it sounds silly but I lost all of those sentimental things, all of the photos,’ Lauren said.

She also lost her sense of self and most of her income.

‘I was a nanny as well as a disability carer – but I nannied from the house and couldn’t do that anymore,’ she said.

‘I also found that I lost myself every time I wore the donated clothes, I just didn’t feel like me when I put on a corporate suit that had fallen to the back of someone’s closet years before they donated it.’

It took three months to find a suitable place to live – a rental that cost less than $400 per week and would take a single mum on.

‘I found most places wanted a place with two working adults and no kids.

‘I looked all the way down the east coast, and then I begged the owner of this one not to give it to anyone else, I even paid five months rent up front even though I didn’t really have the money,’ she said. 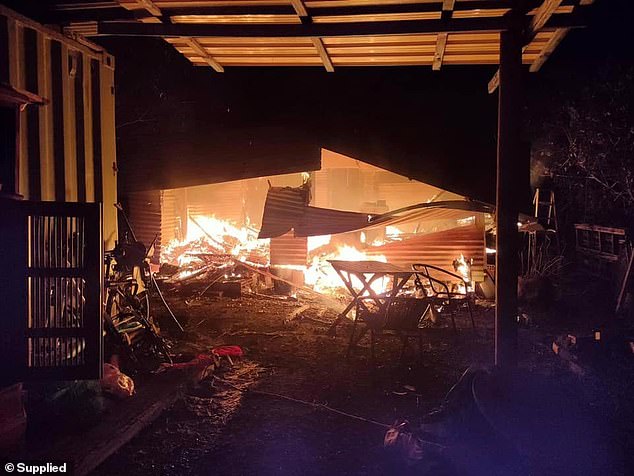 The mum said she had never considered homeless ness before the fire claimed everything but her, Freya, their cats and pyjamas

Lauren planned to rent the apartment, which was located on top of a shop in Lismore’s CBD until Freya finished school.

‘I figured by then I would have enough money for a house or land or something,’ she said.

But less than 12 months after signing the lease  she found herself homeless again. This time she was not alone, hundreds of others in the area had lost their homes as well.

‘I wasn’t too worried at first, I assumed we would be okay because we were in the second storey and the floods were expected to peak at two metres,’ Lauren said.

‘My landlord was relaxed too, he said that the last big floods hadn’t come anywhere near the house, that the tenants just stocked up and waited it out.

‘I was happy to do that and had even set camping stuff up in the house to make it a bit of fun for Freya, in case she complained about being kept inside.’

Lauren said when the levy broke she watched as the main street below became a waterfall.

‘There were cars smashing into shops and trees, it was so terrifying,’ she said.

She had bundled together some electrical cords as a rough tape measure and remained confident – there was still four metres between her and the water.

But she started to get worried near midnight as she watched the water rise.

Lauren fetched her kayak and placed a bag of essentials inside it.

When the floodwaters started creeping inside, she took a sleeping Freya from her bed and put her on the couch, which then started floating.

‘It was 2am and at this point I was terrified, I put her in her pram on the table but the water kept getting higher,’ she said.

‘I called all my friends and family to say my goodbyes.’

She then used the power leads to tie her kayak to the washing line on the balcony, which was now under water.

‘My dad managed to get a boat and just as it was getting light, maybe 7am, I looked up and he was coming towards us,’ she said.

‘It was so surreal watching him come from roof level, when usually we are so high up and watch people arrive in the street below,’ she said. 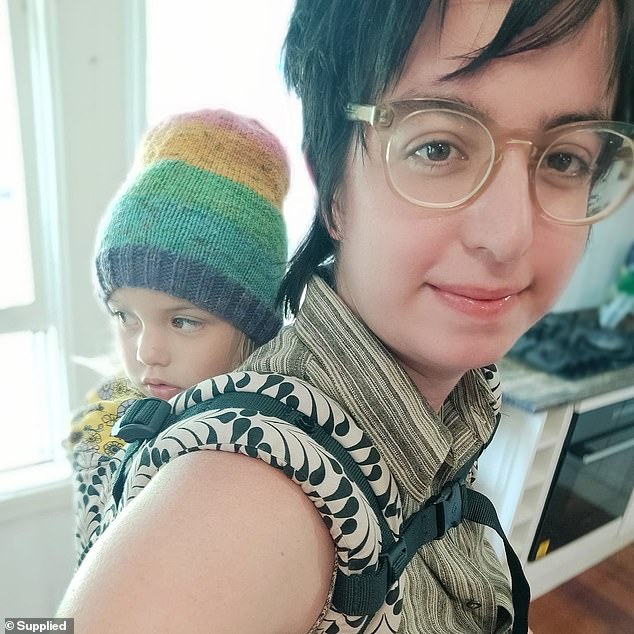 ‘I wasn’t going through the emotional trauma of losing all my things like the first time or like so many people, because I had nothing to lose.

‘And the clothes I had managed to buy since the fire I had put in thick plastic bags and managed to save.

‘Sounds vain to save clothes but I couldn’t bear to be stripped of my identity again,’ she said.

In many ways the second time around was harder.

‘I was suddenly competing with thousands of people for support, for housing, there was barely anything I could afford before now it seemed there was nothing.’

After weeks of couch surfing the mum was offered a caravan to stay in for six months. The end date is October 15, her daughter’s birthday.

Lauren is grateful to have shelter, but it’s far from perfect.

‘It doesn’t have a bathroom, running water. It shakes in the wind. And we are surrounded by people with substance abuse problems and anger management problems – people my three-year-old shouldn’t have to know about,’ she said.

‘We are always muddy, but Freya seems to like it and it is home for now.’

She said while both her mother and father have offered help where they can, neither of them are set up to take her and Freya in.

Lauren admits she often feels helpless but refuses to give up her fight.

January 11 2021 – Lost their home in a fire which started in the kitchen and likely caused by a rat chewing through cables.

January 15 – April – Couch surfed with friends, often for a week at a time, whilst searching for an affordable rental

February 28 – Lismore flooded and thousands, including Lauren were displaced

April 15 – Moved into caravan, offered for free from member of community

October 15, 2022 – The date she has been given to move out of the caravan, her daughter’s birthday

Of her dreams for a tiny house, she said:  ‘I don’t know where I will put it yet but hopefully I will have enough for it to be able to be used without being connected to sewerage or electricity.

‘And that someone will be in the position to lease us a bit of land, now they have relaxed multi-residency rules.’

Lauren said she fears for people who are unable to jump through the hoops to get even the minimum amount of support available, like she has.

She wants people to realise how little government support there is for people who become homeless.

‘I have been really fortunate in many ways because the community has rallied behind us,’ she said.

Lauren said she would also consider social housing but getting her name on a list has proven difficult – and the huge wait time is unrealistic.

Lauren is sharing her story on behalf of Unhoused.

‘Unhoused’ is a major election campaign calling for increased funding of $7.6 billion to address the national crisis that sees 49,000* Australian women homeless each night. Sign the petition to show support and make change.