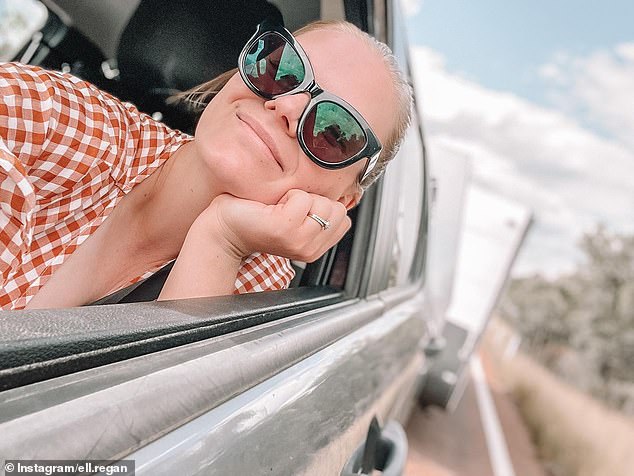 An Australian mum has shared details of what her life is like living in a very remote town ‘in the middle of no where’.

Ell Regan, 28, lives in Barkly Homestead in the Northern Territory and drives five hours to go shopping at her ‘local’ Woolworths and Kmart across the Queensland border in Mount Isa.

The mum-of-one is the resident country singer at the homestead where she lives with her toddler and husband and says the ten hour round trip for a browse at Kmart is part of ‘normal life’.

Ell Regan, 28, lives in Barkly Homestead in the remote Northern Territory and drives five hours across the Queensland boarder to fetch her groceries and browse Kmart 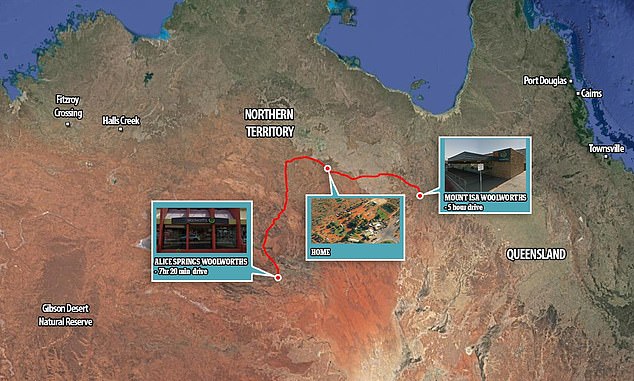 In a TikTok clip, Ell explained she drives four hours and 40 minutes across the border as the Woolworths and Kmart in Mount Isa is closer than those in Alice Springs 719 kilometres away 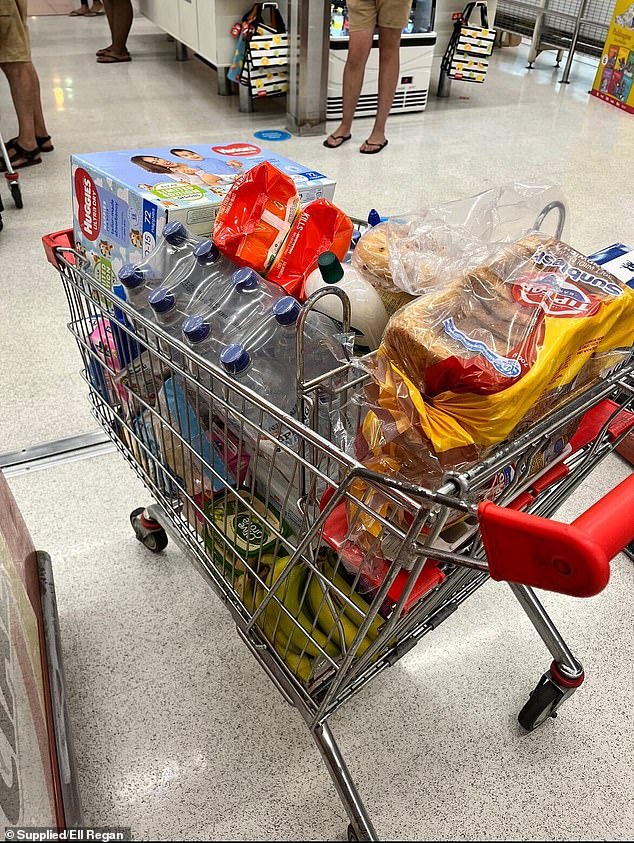 Ell said her standard click and collect order from Woolies is usually between $300-$400 and includes ‘mostly nappies, wipes, fruit, bread and long-life milk’

‘We go to Mount Isa if we want to go to Kmart, clothes shops, get a hair cut etc. It’s like our main city but no one out here complains about the drive,’ she told Femail.

‘We’re used to big drives – download a few podcasts and stock up on snacks and you’re all good.’

Ell, who is originally from Bargo, New South Wales, said her standard click and collect order from Woolies is usually between $300-$400 and includes ‘mostly nappies, wipes, fruit, bread and long-life milk’.

‘We also always end up looking at pool floaties to bring back to swim with in the dam,’ she said.

The country singer mum said she does the mammoth trip to Mount Isa about once a month and can drive two hours to Tennant Creek’s IGA to stock up during the week.

‘Our ‘local’ IGA in Tennant Creek is actually amazing, it’s recently been rebuilt and they have a massive selection,’ Ell said.

‘It’s really just normal life out here, it’s funny that such a mundane, normal thing has turned into this.’

Recently, she told 7Life, she has so far never forgotten anything on one of her shopping trips but said one of the biggest challenges of living so remotely is thinking ahead of what to buy in case things run out.

Previously, Ell went viral on TikTok after posting a video as she was crossing the Territory border coming back from a shop in Mount Isa.

Viewers took to the comments to express their shock at the extreme lengths Ell has to go to for a normal shopping trip.

‘I will never take for granted the two Woolworths, one Coles and one Harris farm that are within 500m of my apartment ever again,’ one woman wrote. 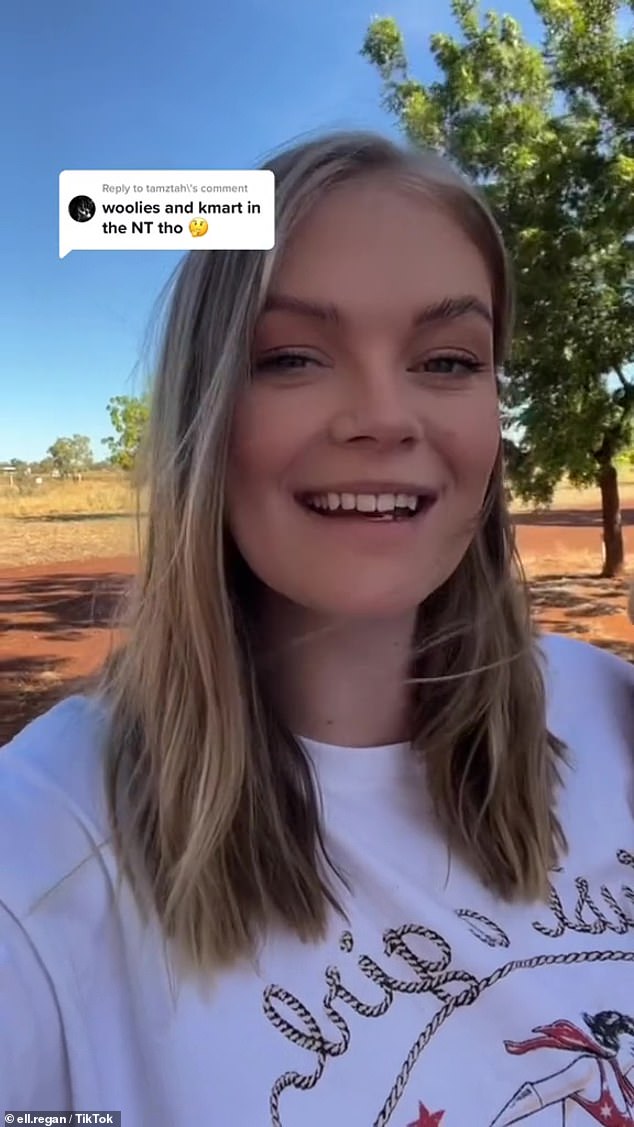 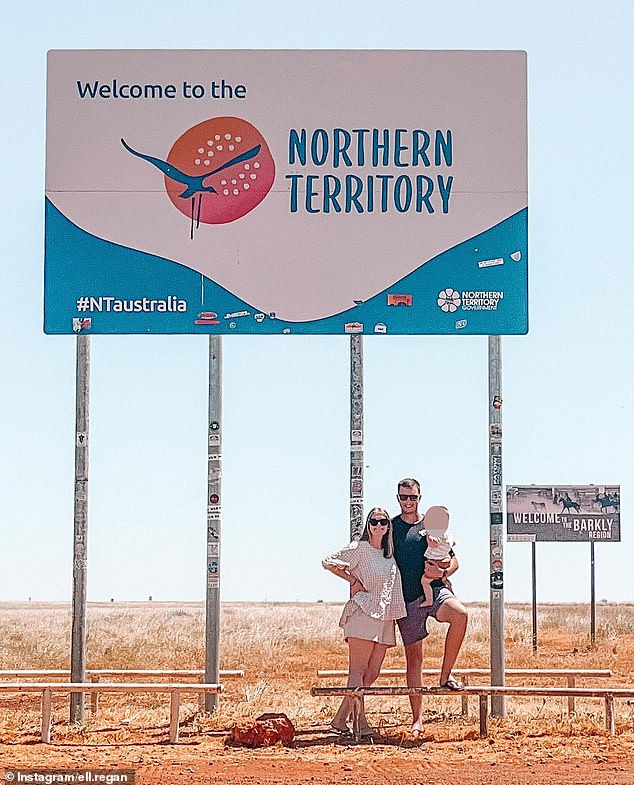 ‘I go to Woolies on the daily five min away. How do you do it!’ a second exclaimed while another joked: ‘Imagine you forgot something’.

In a second clip that has been viewed more than half a million times, Ell explains she drives four hours and 40 minutes across the border as the Woolworths and Kmart in Mount Isa is closer than those in Alice Springs 719 kilometres away.

Ell said she always opts for a click and collect because a grocery shop after the tiring drive is ‘the last thing’ she wants to do and that ‘surprisingly’ nothing from her order was missing, swapped or substituted.

The Barkly Homestead is a remote roadhouse between Tennant creek in the Northern Territory and Camooweal in Queensland and Ell recently became the resident musician after moving with her family ahead of the busy tourist season.