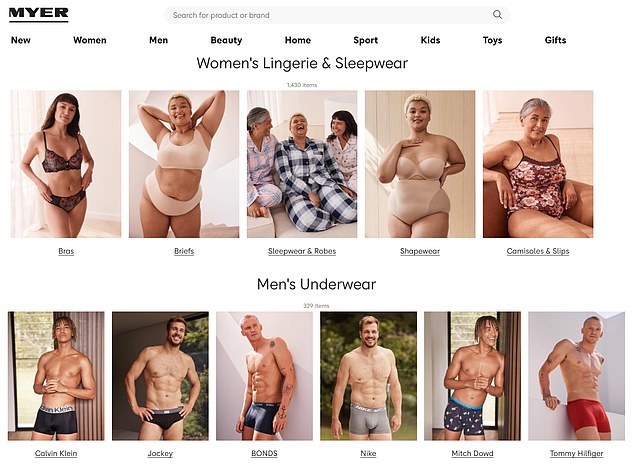 Myer has been accused of having ‘double standards’ in its new catalogue which shows women of all shapes, sizes and ages alongside impeccably groomed, fit, young men.

Furious customers have called out the Australian department store’s marketing department, complaining only half of them appeared to ‘get the message’ of the body positivity movement.

Customers pointed out that men, like women, come in all ‘shapes and sizes’ and feel the pressure to conform to images they see in the media.

‘Something positive is going on at Myer, but seems half marketing department didn’t get the memo,’ one man said, sharing a photo of the catalogue on Reddit.

The retailer told FEMAIL the catalogue is part of a three-week campaign that includes men of all shapes and sizes, showing the ‘diversity of the Australian community’.

But not before furious customers could have their say, with many claiming society seems to have ‘reached its peak with toxic body image’.

‘The fact they only did half annoys me more than if they had done nothing,’ one woman said.

‘It shows they don’t believe in it and are just making light changes to make it look like they are siding with the community.’

And men commenting on the post agreed it is ‘nearly impossible’ to look like the men in the advertisements.

‘Even more than that, it’s these guys jobs to look like that. They can therefore put in the effort required. The rest of us have other jobs which don’t always lend themselves to that kind of body,’ one man said.

A furious mother revealed she is pleased to see ‘normal women’ on the front page of the catalogue but the ‘inequality’ makes her feel sick.

‘I don’t want my teenage son growing up feeling pressured by unrealistic body standards. Not every man grows up looking like a jacked action figure – sure, some do, but depicting this body type as the only one to aspire to is toxic,’ she said.

Adding that showing off well-toned, hair-free, super-tanned men ‘as the norm’ can also negatively impact women.

But the men all appear to be young, hairless, tan and very muscular – which offended the store’s customers

‘I also don’t want my daughters growing up with some warped view of male beauty, or thinking a single body type is the benchmark of normality,’ she said.

And she isn’t the only one angry for the sake of her children.

‘My son was nine when he first asked me how to go on a diet,’ one father revealed.

‘I have had to tell my young teen that he isn’t physically mature enough to go to the gym to look like this, yet,’ said another.

Most people appeared most put-out by the ‘double standards’ at play. 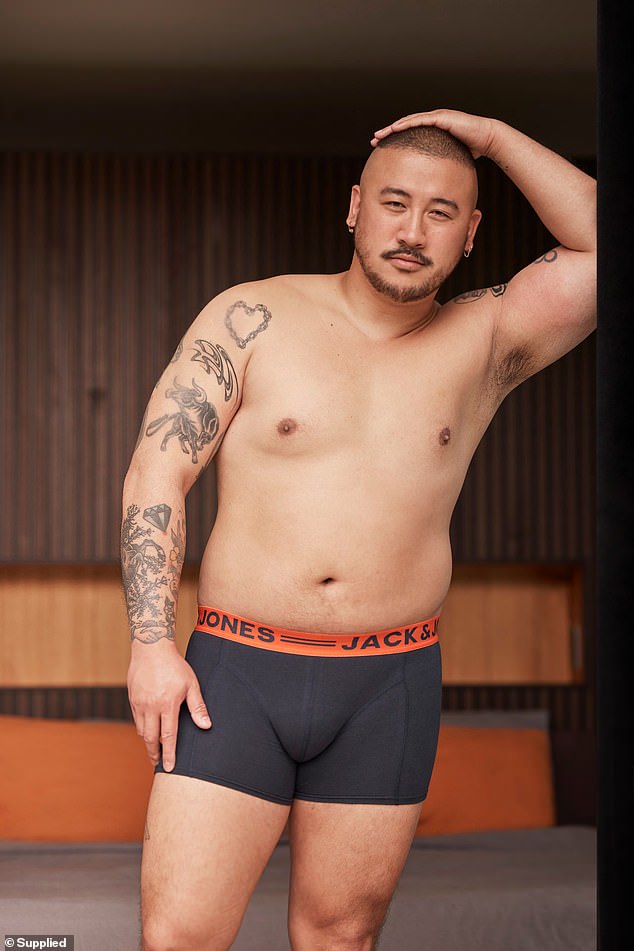 ‘We want confident women but the men must always be muscle bound and hairless,’ one man complained on the post.

‘Hairless but never balding,’ another added.

But others stood against the body positivity movement and complained including ‘overweight’ models is dangerous.

‘I don’t want my son growing up thinking it is okay to have a beer belly,’ one woman said.

Should Myer have included more diverse male models in the catalogue?

‘The problem with all of this is that we show off obese people as the norm, when it is bad for your health.’

While another claimed neither side of the campaign showed ‘sensible balance’.

‘Surely there’s a middle ground where models are healthy but don’t have to be super long legged or in the men’s case work out heaps starved them selves for two days before the shoot,’ one man wrote.

A Myer spokesperson said the catalogue is just one part of the store’s three-week campaign.

‘Myer takes diversity seriously and has a proud record of embracing and showing the diversity of the Australian community in our advertising – this includes all body types, ages, heights, and backgrounds,’ a spokesperson said.

‘In our latest campaign we have a diverse range of models across men’s and women’s fashion and you will see the diversity of the models used as this campaign rolls out,’ they added.

The company also shared two pictures to be rolled out at some point during the three-week campaign which show men without super-lean bodies.