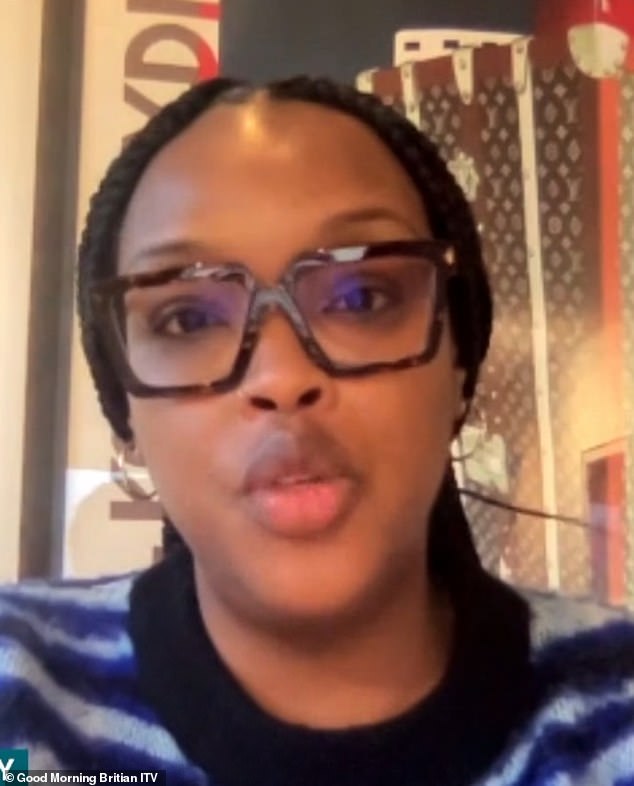 Social activist Nimco Ali has suggested Meghan Markle may not have understood the complexities of coming from a big family as an only child – but added she ‘suffered’ while living in the UK.

Speaking on Good Morning Britain the day after Netflix released the first three episodes of Harry and Meghan’s explosive docuseries, the anti-FGM activist sympathised with the Duchess of Sussex but added it was not necessary to ‘make an enemy’ of the Prince and Princess of Wales who are ‘just doing their duty’.

Her comments come a day after royal fans and commentators were left divided by the content of the docuseries, with foreign media reporting there was ‘no going back’ for the Duke and Duchess.

Appearing on a segment with royal commentator Jennie Bond, Nimco said: ‘I think one of the things that really stands out is that Meghan being an only child I think the complexity of coming from a big family, especially one within an institution, it’s going to be completely different for her.

She added: ‘Also we have to understand that Meghan was suffering and Harry loves her and to see her the person he loves (which he also says that is similar to what happened to his mum) suffering was something that was traumatic and triggered his mental health issues.’

Meghan, 41, was raised by her separated parents Doria Ragland and Thomas Markle. Although she has half-siblings on her father’s side, they are several years older than her. During the first three episodes of the documentary, she explained she barely had a relationship with her older half-sister, Samantha Markle.

She went on to explain she felt ‘compassion’ for the Duke and Duchess of Sussex after they shared their side of the story following their decision to step down as senior royals and move to the US.

However, noting that much of what had been discussed on the Netflix documentary was a ‘family issue’, Nimco also noted that what viewers had seen on the show was the Duke and Duchess ‘airing their grievances’. 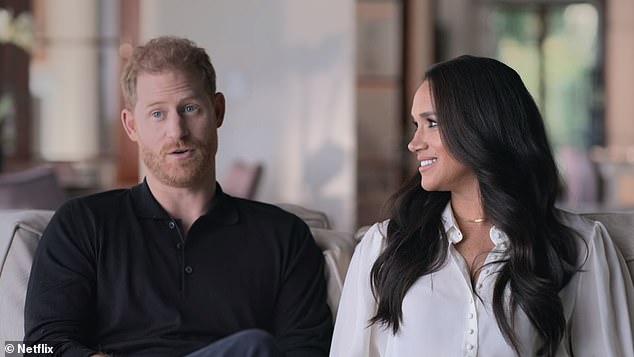 In the first three episodes of Meghan & Harry which aired on Netflix yesterday, the couple took swipes at the Royal Family and the British press

She said: ‘Ultimately I got my OBE from Prince Charles. I haven’t met Meghan but I’ve met Harry and I’ve met Kate.

‘I think one of the tings that we can all agree on is these are people that want to be able to push things forward in society and I don’t think this vile hate coming towards her is helpful at all.’

Nimco also added she didn’t think it was helpful to ‘make an enemy of William and Kate’.

She made the point that she had been left ‘uncomfortable’ by the ‘rhetoric’ around the Harry and Meghan documentary. 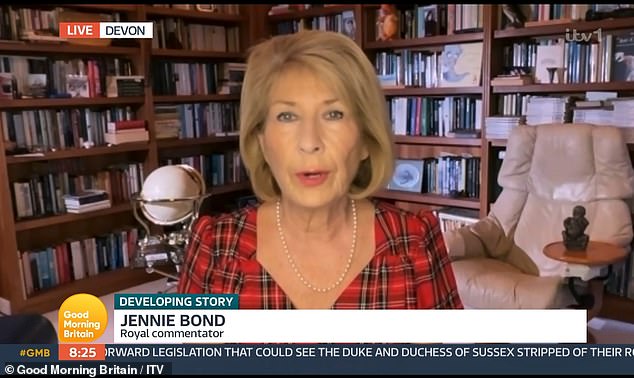 She also questioned Meghan’s suitability for a role within The Firm, saying: ‘The level of unpreparedness… for life within the Royal Family is astonishing.’

She said: ‘He was very cheeky and I do take issue with it, I was quite annoyed at him.’

Hitting back at the Duke of Sussex’s comments that the title of royal correspondent was dished out to journalists to give their reporting ‘credibility’, she said: ‘Actually, we’re experienced, we study, we’re trained, and that’s our speciality.’

Although she said she believes Harry and Meghan will not have any regrets about making the documentary, Nimco said she hoped the brothers would ‘come together’ and reconcile.

The first three episodes of Harry & Meghan dropped on Netflix yesterday morning as the couple made explosive claims about ‘unconscious bias’ within the Royal Family.

He also made a swipe at the choice of wives by his male relatives, viewed as an attack on his father and other senior royals, perhaps even his brother William, Harry insisted that his decision to marry Meghan sets him apart from his family because it was ‘from his heart’ and not simply because she ‘would fit the mould’.

He said his wife being an American actress ‘clouded’ his family’s view of her – and they believed it wouldn’t last.

The Duke of Sussex said: ‘I think for so many people in the family, especially obviously the men, there can be a temptation or an urge to marry someone who would fit the mould as opposed to somebody who you perhaps are destined to be with. The difference between making decisions with your head, or your heart. And my mum certainly made most of her decisions – if not all of them – from her heart. And I am my mother’s son’.